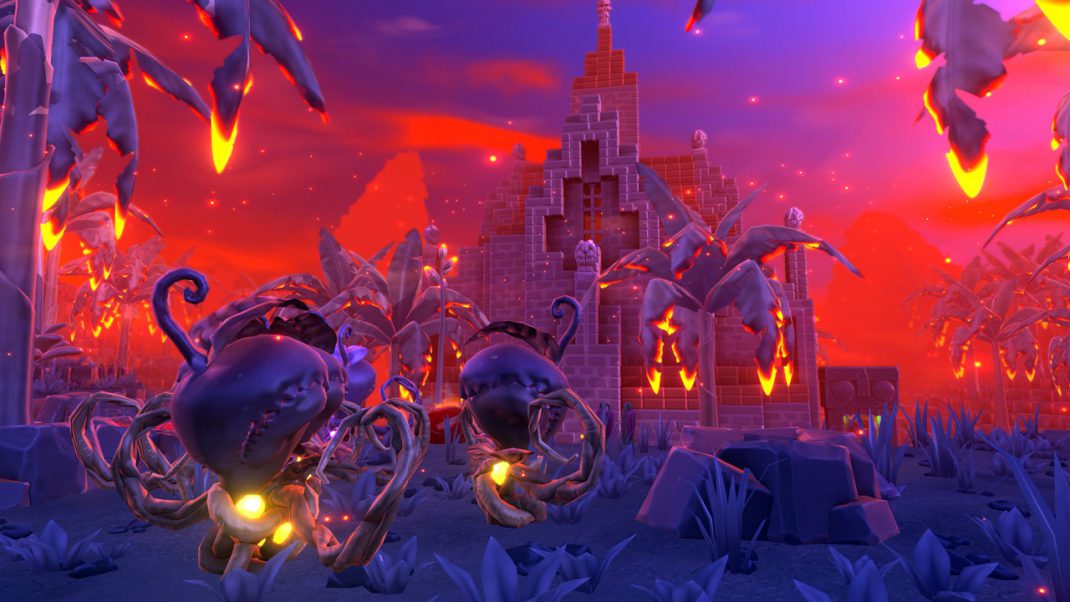 I always love getting a first-look at a game when it is still nice and fresh and people haven’t piled on their opinions yet.  I can’t get to them all the time, I was supposed to review Minecraft when it first came along if I remember right but I definitely had a full plate.  I have only played Minecraft on occasion and that was mainly in short doses, so looking at tons of blocks to be mined didn’t seem that bad to me.  I had a farmhouse that appeared to need repairing. Okay, I can do that. I had chosen to be a Ranger out of the three classes, the other two being Warrior and Mage, so at first I was shooting arrows at stuff.  Then I saw my bow took damage and from the shooting I had done and so I emptied my weapon slot and started punching things.  When enemies showed up I switched back to my bow and started hitting those mobs in the face.  Much like many RPGs, slimes are your first enemy and throughout the game a go-to for collecting crafting ingredients.

The home world being filled with slimes and the occasional bird was worrisome to me… I was enjoying myself but if these were all I fought the whole time it would start to get tiresome.  Luckily it isn’t called Portal Knights for nothing.  I collected the pieces to a portal, assembled them and off I went onto another island.  There were dungeons, creepy creatures that only came out at night, ones that camouflaged until you were on top of them, skeletons, other creepy-crawlies I don’t want to spoil for you.  Just remember what Jake says in The Gunslinger if you find a place to boring “there are other worlds than these.” 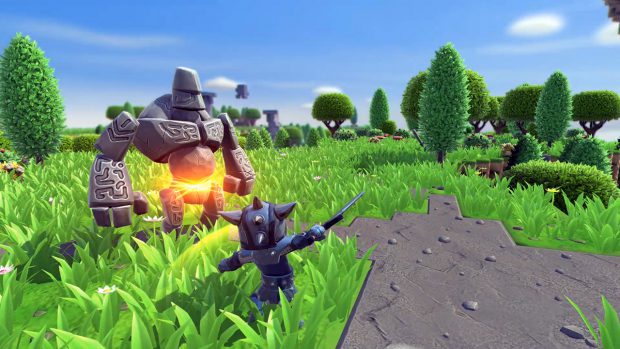 The fact that there are only three classes might seem a bit limiting to some players but I bet more classes are on their way and in the meantime you can do some incredible personalization. There are 29 hair styles, 14 beard styles, 20 eye styles, 28 eye colors, and 21 mouths. You can have five different characters so that you can try all the different classes without deleting any to try the next.

If you haven’t played Minecraft or played a FPS or third person MMORPG, the mix of the three genres might take a bit of getting used to. However, this mix is also what makes the game continually interesting and fun.  An example was I needed copper and there was a copper deposit at my feet, so I started mining. Once the copper deposit was taken you were reminded that this is a series of flying islands connected by portals, if you mine your way through it there is nowhere but down to your death.  If you are the kinda person who might find this annoying rather than entertaining, maybe this isn’t the game for you.  The first time you see some enemies is by surprise while you are doing something else.  There is supposed to be some concerns of protecting your lands according to a wise man but I haven’t had a problem with that yet.  I did get the opportunity to loot big chests in dungeons after killing bosses and do quests requested by NPCs.

I don’t have any friends who have the game and didn’t have much luck looking online for someone to kill about with.  I already have plans on moving my home because though I enjoy a farm and castle just feels, I don’t know, safer?

Dig, Dig, Dig, With A Shovel And A Pick:

Portal Knights feels like a sandbox full of blocks for you to start building things in and at the same time a starter/alpha zone for a 3rd person or 1st person shooter.  I had a couple of crashes which I let go to the early stage of the game and they also didn’t deter me from playing the game.  I look forward to updates and to see what will lie beyond future portals.