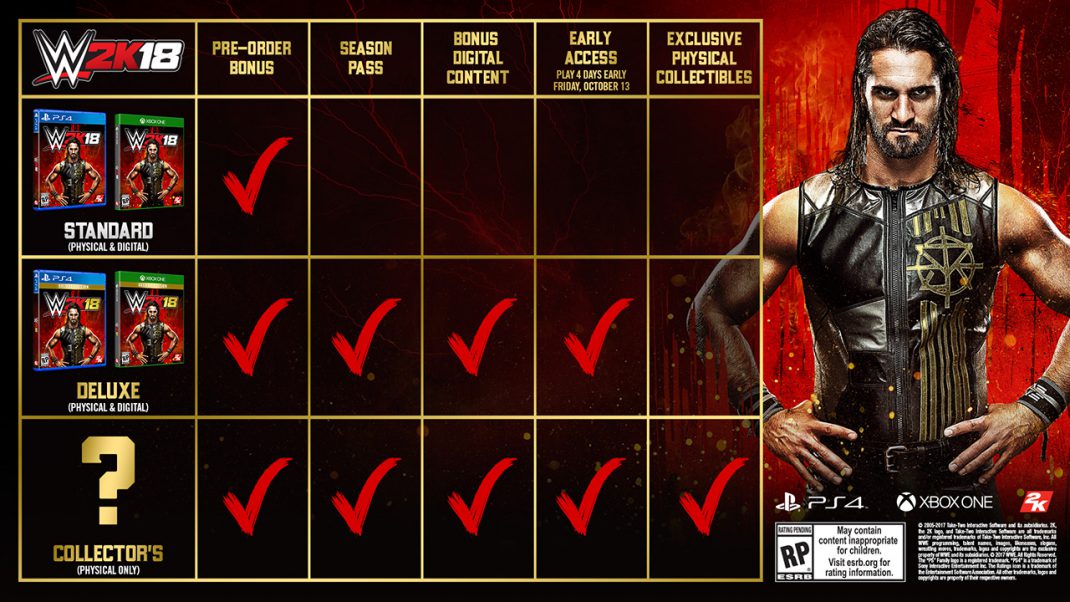 New York, NY – June 19, 2017 – Be like no one. These four simple words likely generate several reactions, but for WWE Superstar Seth Rollins™, they are a master class in describing his unmatched work ethic, disruptive mindset and definitive WWE career.

Since joining WWE in 2010, Rollins has done things on his own terms. Like many claim but never accomplish, he was destined to be different, blaze his own trail and take no prisoners along the way, even if it meant disrespecting history. The first move on Rollins’ chess board: become the inaugural NXT® Champion in 2012 and put everyone on high alert. The second move: make his WWE main roster debut at Survivor Series® later that year, align with WWE Superstars Roman Reigns™ and Dean Ambrose™ to form The Shield™ and rally against authority. As the pieces continued moving, the accolades followed: two-time WWE Champion, United States Champion, WWE Tag Team Champion and “Mr. Money in the Bank®,” to name a few. And now, “The Kingslayer” stands tall after a definitive checkmate: defeating Triple H® on WWE’s grandest stage at WrestleMania® 33.

For every calculated action and result, there is no question Rollins will prevail by any means necessary, and in doing so, embody everything it means to be like no one.

In celebration of his in-ring accomplishments and bold individuality, 2K today announced Seth Rollins as the cover Superstar for WWE® 2K18, the forthcoming release in the flagship WWE video game franchise. In addition, Rollins will personify WWE 2K18’s worldwide marketing campaign – BE LIKE NO ONE – which invites players to explore Rollins’ identity, as well as those of several other WWE Superstars, while learning more about the game. WWE 2K18 is currently scheduled for worldwide release on October 17, 2017 for the PlayStation®4 computer entertainment system and Xbox One.

“As the WWE 2K18 cover Superstar and franchise ambassador, it is my incredible honor and mission to ensure this game will truly BE LIKE NO ONE – a calling card perfect for everything I stand for – as it sets forth on its own unique path,” said Seth Rollins. “Following in the footsteps of other WWE 2K cover Superstars – Dwayne “The Rock®” Johnson, John Cena®, Stone Cold Steve Austin® and Brock Lesnar® – I now carry the torch and proudly represent a new generation of WWE Superstars. I am the future, and the future can’t be stopped.”

“Each year, the WWE 2K franchise emerges with a unique identity, impeccable authenticity, an incredible roster and the freedom for players to customize and control the virtual WWE world through its extensive offerings,” said Chris Snyder, Vice President of Marketing at 2K. “In determining who truly epitomizes BE LIKE NO ONE and represents WWE 2K18 to the fullest extent, there was one obvious answer: Seth ‘Freakin’ Rollins.”

About the WWE 2K18 Deluxe Edition

About the WWE 2K18 Collector’s Edition

Players who purchase the WWE 2K18 Collector’s Edition at participating retailers will also receive Early Access to their game copies and in-game bonuses beginning four days early on Friday, October 13, 2017 for PS4™ system and Xbox One. Details of the WWE 2K18 Collector’s Edition, as well as the ability to pre-order this version of the game, will be available later this summer.

Developed collaboratively by Yuke’s and Visual Concepts, a 2K studio, WWE 2K18 is not yet rated by the ESRB. WWE 2K18 is scheduled for worldwide release on October 17, 2017 for the PS4™ system and Xbox One. For more information on WWE 2K18 and 2K, visit wwe.2k.com, become a fan on Facebook, follow the game on Twitter and Instagram using the hashtags #WWE2K18 and #BLN1 or subscribe on YouTube.