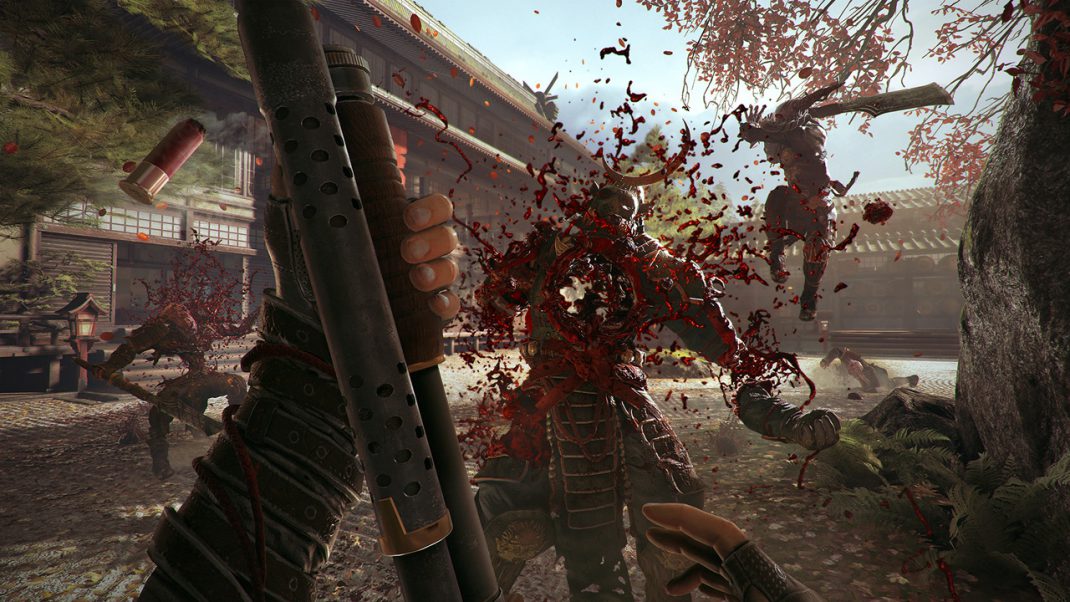 If the above quote doesn’t immediately fill you with 80’s Machismo, go watch the trailer for the Shadow Warrior 2 on YouTube or something, I will wait.

*Still humming the song* Ah are you back? Good, good, having you watch that really helps set the mood so much quicker than saying that Shadow Warrior 2 is an over the top splatter fest with tons of blood and weapons.  I guess it didn’t take that long but the key to the game is not to take it seriously, it isn’t serious, I mean at it’s beginning they throw a song from the ’80s animated Transformers film (yeah that was where you had heard it before).My first playing was actually by myself and before you start making jokes about no friends or “solo wang gameplay” the game play is first person then even if I played with my friends it is a first person experience.  So if you do find yourselves playing at one house and one system you might be playing hand off with the controller or just have them play on their rig and use headphones.  This is kinda a bummer to me since I think most people are comfortable enough and have large enough screens to accept quartering them for gameplay.  We’ve come a long ways and few people have itty bitty screens these days. 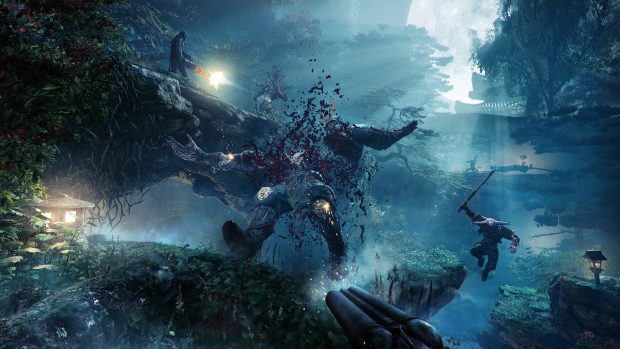 Now for the scary part of the review.  That above was my only complaint.  This game is amazing at everything it tries to do.  You get over 70 weapons and modifiers that drop and can be crafted to easily make a weapon into a whole new kind of flesh-rending beast.  On the subject of beasts, if you ever played the Diablo games and had characters of a different color meaning an immunity and better loot drop, Shadow Warrior 2 has the same game mechanic.  There is a storyline which is a bit simple, but that makes it easier to buy into the jokes being made because Shadow Warrior 2 doesn’t take itself seriously, ever.  They even have fun naming weapons, some of which I have no doubt were lost on younger players.  The “Hauer” shotgun would be a welcome weapon to any hobo, the energy blast from the “dec-ARD” pistol just can’t be replicated, teehee.  If the name isn’t fun to you I still imagine the damage it does, especially when you get a certain chainsaw in you mitts, will be!  I admit I wish they had picked a sexier weapon to name the “ripper” after me but what may have seem simple on that was more than made up for with the King Skeletor machine gun, it would cut any He-Man with it’s grey skull.  Then once you get that weapon you look through gems you can add on to the weapon and maybe you can increase the magazine size or crit damage.  Personally I kept forgetting gems because I was having so much fun with weapon combos and environmental attacks.

The environments are the results of Shadow Warrior which would be a reason to play the first but not necessary.  If you picked the game up as a promo for both games go ahead and play the first.  I never got around to it myself but I have eyes and can see that the world has become one big toxic turd and I stab, shoot or explode my way through it.  A bit of a hint but not too much is that besides the monsters there are parts of the environment that can hurt anyone near you when they take damage and explode.  This adds to the interest because you may wipe out a whole bunch of nasties with one will place round. 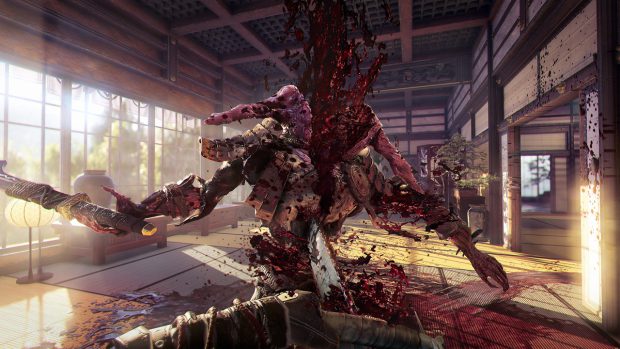 There are a couple of reasons for replay: your level cap is pretty high and you probably won’t hit it after one run through, heck maybe not after a couple. Another reason is you probably won’t get all 70 plus weapons on one run and you will probably not be able to modify the weapons the way you want or crafted.

Oh yeah I didn’t really go into that, they have a crafting system like Dead Island or Borderlands, or well any game that lets you take a couple crappy weapons and combine them to improve them.  So not only are you collecting the 70 plus weapons there are and using your favorites you need to keep an eye out for crappy ones that might make more mega hardware.

Back To Playing With Wang:

As I mentioned the only drawback is not having 4 player split screen, otherwise Shadow Warrior 2 is the best hack and slash, spray and pray, wacky and tacky game I have played in recent memory. Definitely worth picking up and playing!