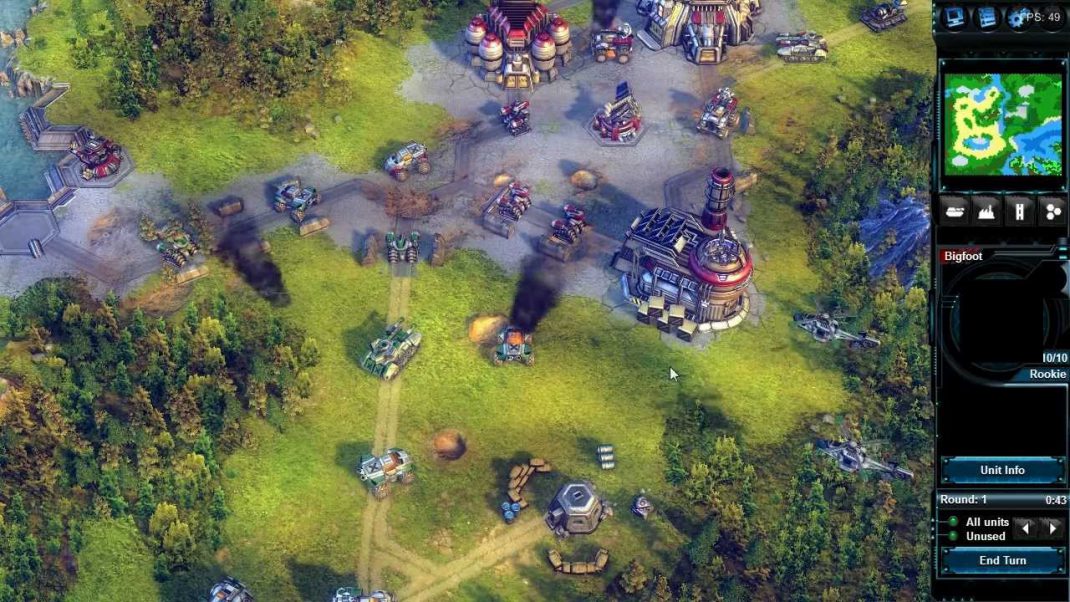 As a junkie for tactical games, our Editor-in-Chief doesn’t even ask if I want the assignment, he just passes it my way.  He knew he especially had me hooked with Battle Worlds: Kronos because this big fish of a game was making splashes on a console platform, giving me a chance to rest my back in bed and figure out how they took a game format that usually uses most of the keyboard and squeeze it down to 12 buttons and a couple sticks.  So enough about me, let’s talk about Battle Worlds: Kronos.

When the developers  started at building the game they had a vision, what would “Panzer General” or Battle Isle” look like if it were made with modern technology and graphics?  So they went to crowdfunding through Kickstarter and tried to get their backers input as much as possible so that they can truly bring about a game that the backers wanted to see.  I got into Panzer General a lot but for the most part I went into this game not remembering either of those and so as to not go in with a bias I didn’t research.  I quickly found I was playing a hexagonal strategy game with vehicles that looked like StarCraft but the gameplay was very traditional hexagonal turn-based which intrigued me since traditionally strategy games don’t mesh well on the console, partly the player based but mostly since it generally takes a lot of keyboard to get some of the work done and you are now down to a dozen buttons and a couple sticks.

Going with a hexagonal base was a very smart choice, there is no rush to get through you turn you just need to make sure you get everything done with a controller.  Taking your time, double check choices, save often and end your turn only when you are completely sure you have done everything.  If you did forget anything that is why you have the frequent saves. If you are a bit of a perfectionist like people who keep re-rolling their adventure game stats until they feel they have them about as high as possible you can do the frequent save before each battle since it is random chance and can turn out ugly.  If you are an armchair general this game is terrific, you can figure out flanking maneuvers, that a frontal attack by itself is usually suicide and when to pull back and regroup.

I really thought using a controller would slow me down because the only way you would be able to do anything was to memorize a complicated set of buttons to get anything done but it features a really well-done design that wasn’t quite intuitive but really not that bad. Once I realized that turns had phases to them (MTG fans will pic it up in a heartbeat) then it went even smoother.  It was also already built into the game that way since the game’s PC days but if a game is having a hard time converting from PC to console and can work in a phase system it will insanely ease their work.  With phases you can use the same buttons you used in phase one of your turn for say phase three because they are no longer occupied with the last commands.  Brilliant!

The single player campaigns boast over 50 hours of content which would probably fry your brain on so take breaks to stretch often and don’t be afraid to save, it will just make your game more fun.  There were a few times I would forget to save for a couple hours then BAM! I need one and I have to go back nearly to the start of the level.

Another nice thing about the game being turn-based is how the multiplayer system can be set-up.  They have actually implemented a “play-by-mail” system which is something I haven’t seen a game do in some time.  Back in the days before telephones in every house game of chess would be played through the mail, each player having a table in their house and making their moves and their opponents on it.  In this case the multiplayer game is very similar.  You make your move then turn it over to the other player and come back later in the day or even the next one.  During that time the other player will come and make their move.  It’s clever and I’m surprised I can’t remember seeing it done with a turn-based strategy game.  Maybe the impatience of the generation. Additionally, the game’s graphics look great and fit this genre perfectly.

Battle Worlds: Kronos was a great example of a game that promised it’s Kickstarter supporters something and not only delivered but set a new bar.  I look forward to playing it some more and replaying it and DLCs on their way.  I’m not sure what I hope for more, that the development team gets snatched up to create even bigger projects or have them continue making great games on their own terms.  For my money (and it would be since I would invest in the next DLC) I hope to see more Battle Worlds in the future…