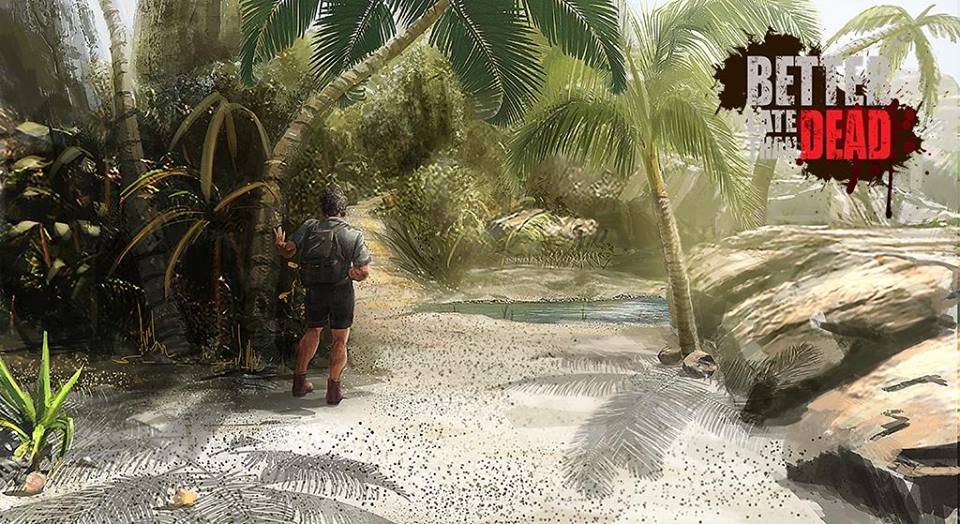 I often just jump into games and start playing them without knowing all the much about them.  I feel if I get too much warning about a particular game, I might figure out the story too much, master the mechanics quicker than the average player and have general surprises spoiled for me.  If I know I am going to be reviewing a game I usually don’t even check out the trailer until afterwards to see if it adequately represented the game.

Better Late Than Dead however had been bouncing around since early alpha as a chat topic among players and reviewers and at first it was thought to be just an interesting take on a survival… maybe survival horror with the key for survival being more defensive than offensive.  Then along came the chance to play it and I went right at it, running around doing things maybe a bit faster than the average player from so many survival games on my shelf when suddenly I was literally getting bit in the rear-end by an alligator.  A few bites and I was Gator Chow and going for the last save point… which was grayed out… after hours of work.  Wait, Permadeath?  It’s got… ok that’s fine. I remember where just about everything was located so I will just head back and…  random drop rate and location?  So in a feature I don’t often use much these days here are the game’s features which will help you stay Better Late Than Dead. 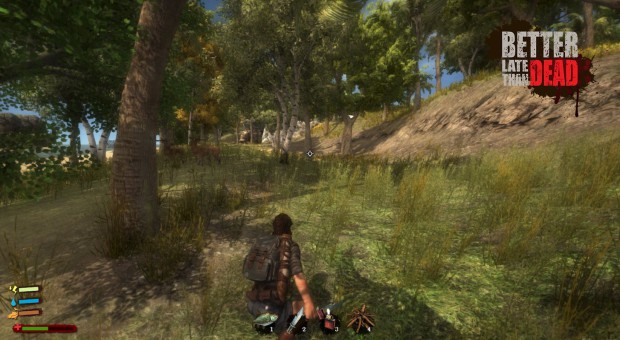 Accept you will probably succumb to its menace a few times.  This is a simple act that will help you maintain your Zen while playing this survival which has it’s own set of rules that might not fit the normal world.  Things sitting around that look sharp and pointy will not be usable for it’s sharpness or pointy unless it shows up as such in the menu or after crafting.  So the first important thing to do in the game is run and find what you need for the different crafting recipes while watching for anything that moves or for the music to turn ominous.  Scary music like in a movie means even if you can’t see the danger it is nearby.

It’s really easy to start feel comfortable like you have a good idea what is around, these are really the times you need to be cautious.  Permadeath.  To be hours into the game and have permadeath hit you again… the save points are only for when you quit the game alive, they are no safety net whatsoever.  It is a great game to play when you have as few distractions as possible, no television in the background, no one else in the house telling you they just stocked something on *this* shelf of the fridge.  Think of it more as a jigsaw puzzle on a rickety TV tray that anyone else might bump over so you tuck it safely in the corner when others are around. 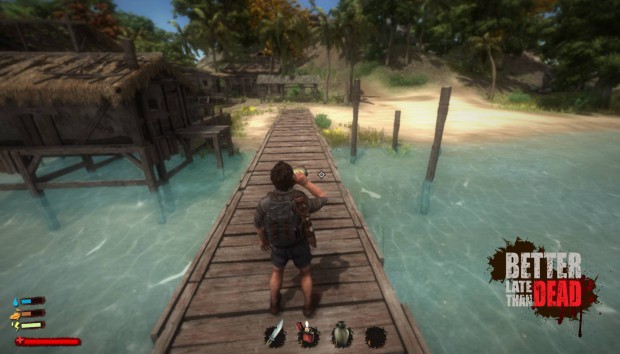 Now that the whole permadeath thing has been drilled into your head this is what you imagined Robinson Crusoe was like probably as a kid.  Only with body bags.  And cryptic notes about madness.  And instead of a shipwreck you bust out of a crate that was supposed to be your watery coffin.  Otherwise you need to find items and figure out how to craft them together.  Your inventory is limited but if you concentrate on dropped items such as a key or a knife first and only work on growing stuff like shaking trees for coconuts and mangos as needed then you are less likely to have a full inventory and find yourself dropping excess coconuts in weird places all over the islands.

This is a review and I have been mostly loading it with tips because this a fun game with a lot of mystery involved and permadeath can be a very cool aspect of a title if used properly which Better Late Than Dead does.  It is still being tooled a bit, go in feeling for a beta at this point and you will be more than happy with the results.  I haven’t had a second player join me for multiplayer yet which was introduced very recently so hasn’t fully caught on as the game probably will through word of mouth.  The game has good quality, a good concept and so far pretty good devlivery, just make sure that permadeath survival is your thing and you’ll be just fine.

Better Late Than Dead is a fairly rare entry into the survival series with it’s permadeath and the interesting ways it tries to cause them which I don’t want to spoil here.  It still feels like it needs a bit of tooling and I think it is still getting it at press time but even without another coat of polish it is a fun and addictive game.