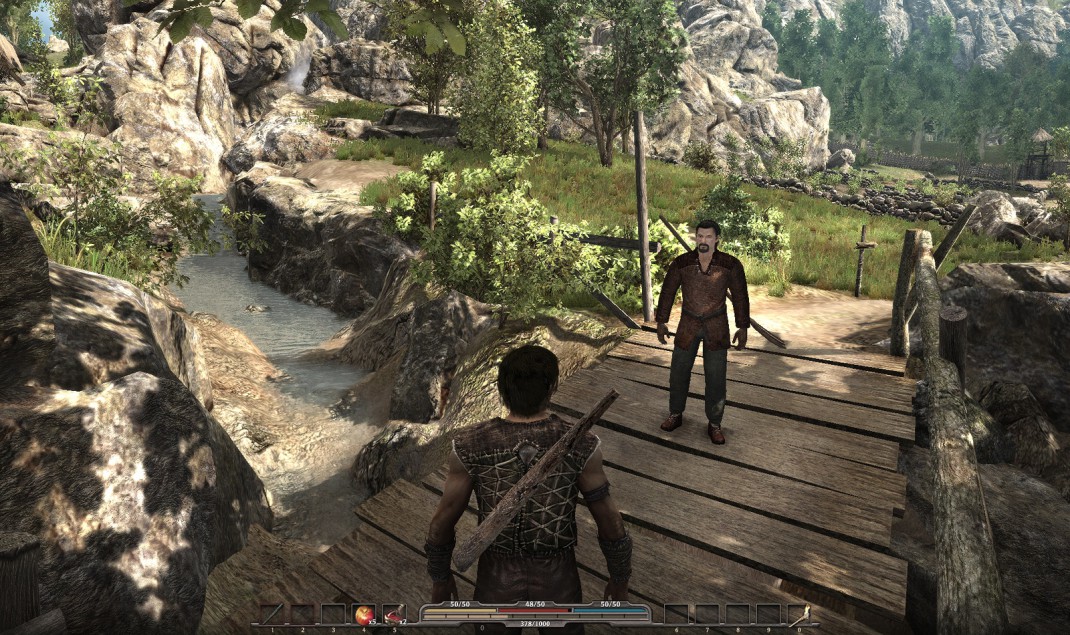 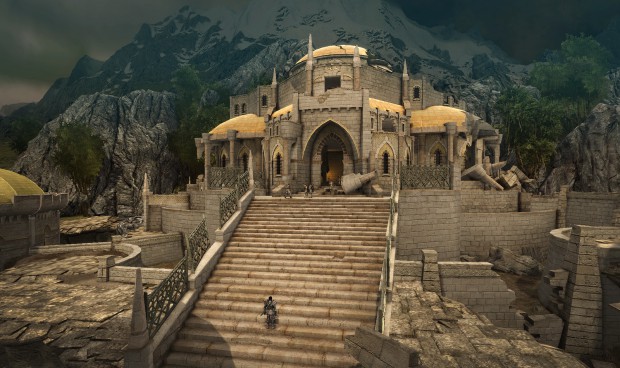 When Arcania: Gothic 4 came out in November of 2010, it was a pretty busy time in my life. I felt I had to review the game, not to just play it but also immerse myself in it as both a stress relief and escape. Everything I had seen alluded to it being a great RPG game with a lot of sandbox play and, thankfully, it lived up to the hype. The only issues that really came up at the time were bugs that I reported would probably be fixed in a patch or two. Now, a little over 4 years later, I am back in that world with Arcania: The Complete Story which bundles the first game and its expansion, giving them some next-gen polish in one experience. 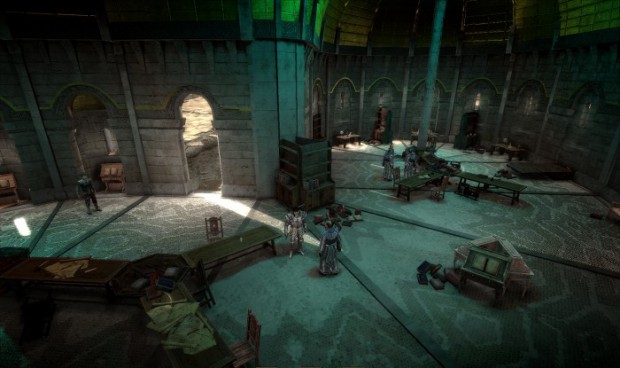 Story:
Without giving too much away, in the first game you are a sheep herder turned warrior when you go down a road of vengeance and discover your honor. There’s more to it than that but I like to keep things spoiler-free! In the sequel, you are older, wiser and trying to prevent the title Fall of Setarrif from happening. There is A LOT more to it than that – but finding out the rest on your own is the best part. 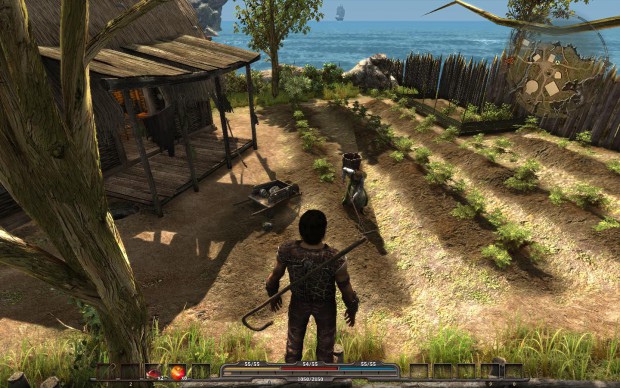 Hands On:
Even though I had played all the quests in the first game four years ago – with its new beauty and classic fun, I was once again immersed in the world, contently playing in no time. I remembered a few of the confusing quests that slowed me down the first time and I even remembered where most of the enemies would be and how best to kill them – a sign of how much of an impact the game made on me 4 1/2 years ago! The game looked amazing on my PlayStation 4 and the hours started to fly by.

The game involves the classic RPG tropes of leveling, improving gear, and mastering skills based on your play style. This means you can put everything into strength type attributes if you are a warrior at heart, dexterity if you like to play a hunter, or magicks and mana if you like to play a mage. Personally, I liked being a warrior with a “Jack of All Trades” style putting time into both melee, range, and magic abilities. It makes it handy to soften up an enemy and slow them down at a distance before clashing weapons up close.

I did begin to notice something a bit strange that had me frowning: The bugs were still there – and I’m not talking about the poisonous flies! I would be fighting something, dodge an attack, put some distance between us and suddenly it would appear in the air behind me. I would go to loot a corpse by the shoreline and slide into the water and get stuck there. Or, even worse, I would be moving along a cliff line and suddenly I was floating along the rocks, then floating down over the edge and falling to my death. They were all-too-familiar bugs that had come with the game when I played it around its release date and all these years later they were all still there. It didn’t stop me from playing, mind you, but I found myself saving every couple of minutes in case I encountered a bug that would kill me and set me back 20 minutes to an hour (I had to take a break after the first hour setback – too frustrating). I’m left to wonder if they started from a buggy, earlier version of the game when updating graphics or if they were never fixed? 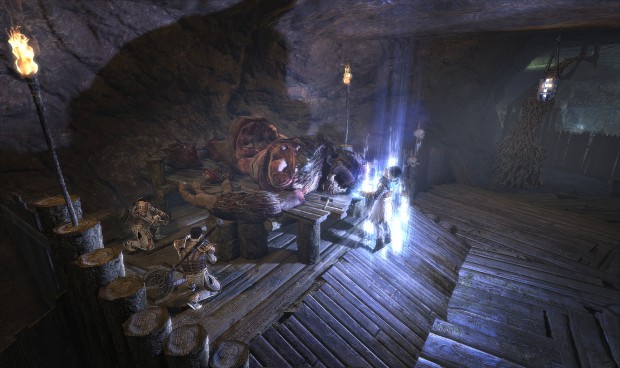 Jumping straight into playing the expansion pack Arcania: The Fall of Setarrif, the game starts you at level 28 and you choose a specialty of warrior, hunter or mage with most of the points pre-assigned in the important elements of that class, while leaving you a few to place where you choose. This system worked nicely into my “Jack of All Trades” playstyle again. The first game had a lot of dialogue to setup locations and the situation, the second game assumes you played the first and jumps right in with you as the champion and trouble brewing. It was nice since if you played the first, even if it had been years ago, it is easy to play. With the second game, the developers seemed to take into account that the players wanted a bit more variety, so they added more diverse areas than appeared in the first game. Fall of Setarrif also didn’t seem to suffer quite so much from repetition of enemies as the first game – however, that might just be because I didn’t notice it as much as I didn’t play through it for review twice like the other game. Most likely it is because it is an expansion so it has less time and locations to fill with content. The expansion definitely brings up a question of whether or not the first game would have been better, maybe less buggy even, if it hadn’t been so ambitious in size and time!

Arcania was a pretty long playthrough if you stuck just to the main story and didn’t wander off exploring, the expansion is probably at least 8 hours if you stick to just the story which in both cases I advise against. This game is an fairly open world to explore for a reason, it really adds to the experience to take it all in, do side quests, and find hidden treasures. Even with marathon playtimes you can get days if not weeks out of this game pack! 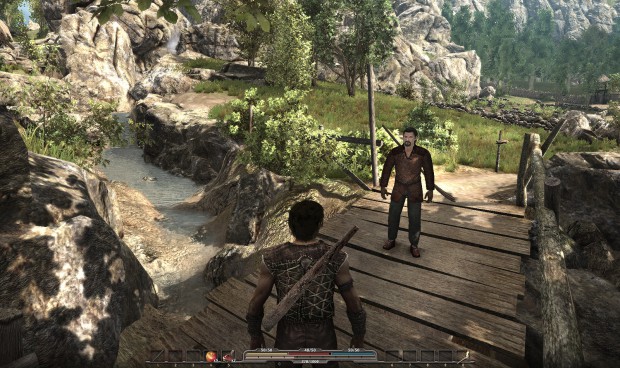 Last Call:
Aracnia: The Complete Tale is a fun game to play and a great world to explore. It has some great graphics, interesting stories, and rewarding gameplay. It also has its bugs and they are pretty decent ones – but, if you have patience for them and save often, the rewards seem to be worth the aggravations.