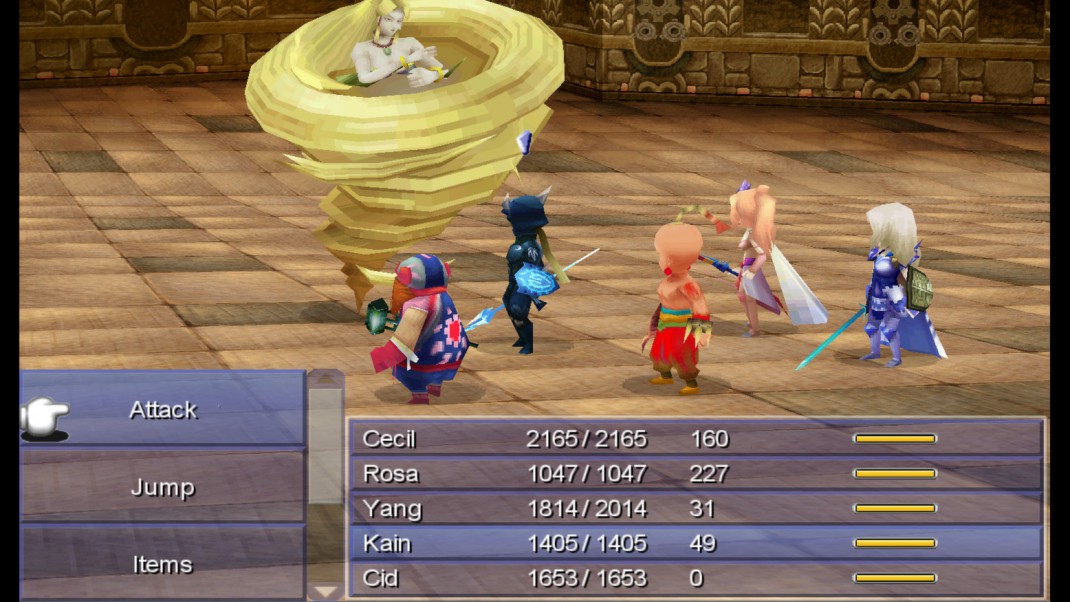 I’ve mentioned a time or two that I am a long time gamer, yes I actually played Pong when it came out and I was the first kid in my neighborhood to have the Atari Computer System later to be known as the Atari 2600. So I have a long history with the Final Fantasy titles that dates back to their arrival. One of my favorites was Final Fantasy IV with its heavy and detailed storyline, especially for its time. I’ve played it over again on different systems with a certain deja’ vu but mostly just the enjoyment of going back to an old friend. So, it was with a warm smile I sat down to take Cecil on the adventure once again, this time on PC and Steam.

Description:
As the first game in the series to feature the innovative Active Time Battle system, FINAL FANTASY IV stands as an iconic milestone in FINAL FANTASY history. Lose yourself in this timeless tale of heroes, betrayal, love and redemption—now optimized for PC!

Hands On:
It’s like going back in time only with today’s graphics quality. They kept the initial feel of the game, the edges of the characters are rough and could be a bit more detailed but otherwise the images are clean and there are details to be found. Cecil’s armor for example is a simple pattern with rough edges but the king’s face has a lot of character than those old bit pixel days. Also the cutscenes are definitely cleaned up considerably, which each version of the game these have evolved a little until what we have now which is fully voiced and as detailed as any modern fantasy games cutscenes.

The cutscenes may be updated but the gameplay has been purposely kept simple to harken back to the days where you didn’t need a ton of buttons to get through a game. Mostly you use the arrow keys and the enter button, the mouse is completely taken out of the equation. There is other buttons for your inventory, map and auto-battle as well as backspace to back out of menus but these are simple set up so that menu negotiations are easier than having to arrow and enter through everything. Surprisingly the simplicity takes a little getting used to and the temptation to grab a controller where the mapping is more natural is definitely there but since I broke my controller I had that temptation taken away and soon found I could play the game and catch up on social media at the same time, something that in the old days would have seemed like science fiction.

I found myself farming the same old grounds for exp and gils, getting lost looking for the same cities and all around having such a great time that hours had flown by before I realized it. I had an appointment to keep and found myself counting the minutes I had left before I had to really boogie out the door. Shower? Extra deodorant would do. Coupons for dinner after? Ah well I’ll eat out another day, that way I can get back home and eat in front of the game. It was funny how quickly the excuses for “one more battle” come back to you.

Last Call:
Final Fantasy IV was groundbreaking for its time and, when it comes to fun gameplay, has held up amazingly well over the years through its various incarnations and updates. I just moved my residence and I saw a box labeled “SNES” last week – Final Fantasy IV was one of the titles I was most looking forward to busting out and giving some playtime. I still will though I might not get far into the campaign before coming back to the Steam Edition. Why? Because I can have all the nostalgia with a better control system, better graphics and a built-in jukebox. Maybe I will even be able to get a friend born after the 80s to give it a try, to not just see history but play it.