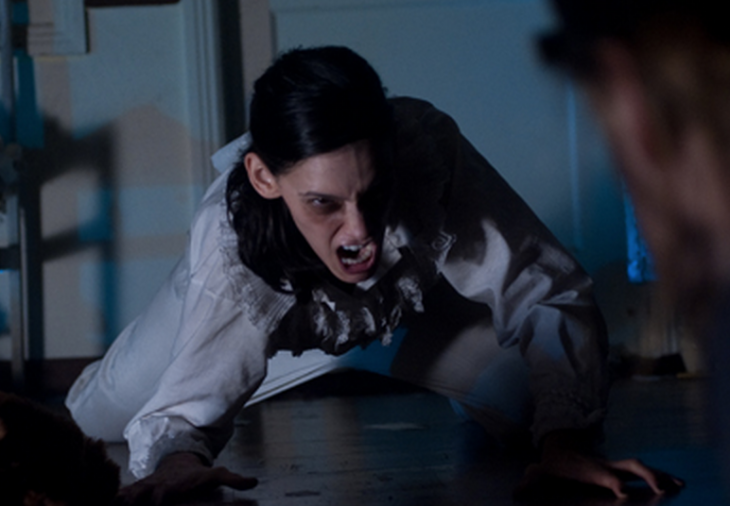 Interview with Jon Braver of Delusion: Lies Within

Recently, we got the chance to interview Jon Braver, the creator of Delusion: Lies Within, the interactive horror theatre experience running at the Fitzgerald Mansion in Los Angeles, CA about his event and background.

Q) Hi Jon – thanks for taking the time to answer our questions. We wanted to start with finding out a bit about you. It is written in your bio that you worked as a stuntman for a multitude of blockbuster films, such as Star Trek, Transformers 3, and more. How do you go from awesome Hollywood stuntman to the creator of an “Interactive Horror Theatre” experience like Delusion?

A) Awesome Hollywood Stuntman! That sounds cool. 😉 Despite what you may think I actually like the moniker “creator of an Interactive Horror Theatre experience” better! Because it has the word “creator” in there. Being a stuntman, while exhilarating as it was (and still is), held me back creatively. And jobs were at the whim of so many others. Not to sound trite, but I needed to control more of my own destiny. I learned an ungodly amount about filmmaking and life in general from some of the best names in the business. They all had a huge influence on where I am now. Delusion (and directing) has always been my main passion and with the amazing talent pool I’ve connected with over the years I have been enabled to fully realize this passion project. The idea of Delusion came from my love of classic horror films (i.e. The Shining, The Omen II, Aliens) as well as a yearning for my super geek days of role-playing games. I decided to combine the two and place the audience inside a living, breathing world of mystery, horror and suspense. Thankfully, the audience has responded with the common saying “…I felt like I was inside a horror film!” This is the best response I can get.

Q) As this is your fourth year creating the Delusion horror experience, what has changed since you started – what has gotten easier, more difficult, etc?

A) A loaded question. Well, for one thing, I’m not married anymore! Ha…ha……..ha…(trailing off awkwardly). Perhaps starting off too personal was a bad idea. Oh well. I could just go back and erase that answer but….fuck it…I want to look forward! But seriously, so much has changed. Nothing has gotten easier except selling tickets. We have built an amazing following of spectacular people, many of whom I’ve had the honor of meeting. These people confirm the strong desire for this new type of theatre, a more intimate, and lasting, psychologically disturbing experience. If anything, Delusion has gotten more difficult mainly due to the stifling LA bureaucracy and permit process. Don’t get me wrong, there are many in city agencies who support what we’re doing (i.e. fire marshals could just say no, but they don’t) but the protocol to getting this type of thing going makes it difficult. We’re just trying to innovate and create and there are many obstacles in that path that can indirectly chip away at your creativity and goals. Yet, I have an amazing team beside me. They truly make this whole production happen. And the fans of the show, mixed with my stubborn desire to return to my childhood, keeps me going!

Q) I am ashamed to say that we have not yet had the thrill of going to one of the past Delusion productions, but are planning to remedy that this year. Is there anything you would want to tell us as first timers going to the event?

A) (gasp) You have never been to any of my plays?! That’s it…this interview is over. (I got up, left my house, then shook it off….and now I’m back). Ok, it’s fine, I understand. All I’ll say is this, and it’s the most important thing to know before you enter our world: Let yourself go completely and be a kid again. If you fully commit and respect the story, you will get everything I want people to get out of it. There is great depth in this story. It is all about the story. Don’t expect a haunted house experience or simply to be terrified. This is a tale of mystery, horror, suspense, love, death and otherworldliness!

Q) Could you give us a bit of a rundown as to the time it takes you to create Delusion. When do you start brainstorming, writing, etc?

A) It seems to take all year! Finding a venue has been the biggest hurdle, and everything depends on that. The earlier I get the venue, the easier the process is. This year we got it in early May. Last year (2013) it was early August. That was extremely difficult to pull off….but we did it! Once I get the venue, I start writing immediately in the space itself. It takes about 6 weeks to write the play, then we dive into pre-prod. Typically, it takes about 3 1/2 months of prep to make it happen.

Q) One of my favorite films of all time is John Carpenter’s The Thing. The creepiest thing about it, on a personal level, isn’t the monsters or the gore effects but the amount of distrust and paranoia that Carpenter infused in the story. What were some of your inspirations in crafting Delusion’s plot?

A) Mine too. The music, the setting, the overall tone of the film makes you terribly uneasy along with the actors. In terms of inspiration, I love RPG’s. I haven’t been able to play them forever, but I love them. Games like King’s Quest, Baldur’s Gate and The Witcher shine through into Delusion. Like I said earlier, my favorite films in the horror and suspense genre are Aliens, The Shining, The Omen II, Pan’s Labyrinth and The Orphanage (Spanish film). I always tell people Delusion is a tonal mix of all these films and games. Also, you should know, I hate blood, guts and gore unless required for the story. Delusion’s fear tactics have always been, and will continue to be, psychological in nature. For this year’s plot, my inspirations initially came from the venue itself. I feel the energy of the place and let it, along with ideas from my past, shape the story. Each year is different. I’ll give you a taste of what this year is all about. I’ve decided to venture into a bit of fantasy for this one. We are circa 1948 as we dive into the world of Elena Fitzgerald: a revered and reclusive novelist whose daughter went missing many years ago. After this horrific event, Elena fell into a dark place in her mind…as one would imagine. She became convinced that if she finished a dark, epic book series called The Stygian Ascent her daughter Mary would be returned to her. Her twisted devotion to writing has brought about her characters into the real world. They protect her, they love her and will not rest until she does as she promised she would: finish the series. The audience plays the part of Elena’s rabid fans, who have been without a book for many years. They won’t take it anymore and decide to invade Elena’s manor and find out what’s happened to her.

Q) As Delusion is basically a theatre experience, you have to use real actors I would imagine. How do you work your audition process?

A) I have a wonderful casting director and assistant director. We all go through the typical casting process with Actors Access, Backstage and the like. I like to hire, first and foremost, passionate people. Must have a wonderful attitude to join this crew. They don’t have to be the best but if I see something wonderful in them, I get excited to try and bring that out.

Q) Going along with the interactive theatre vibe, do guests have to be prompted at all with any lines to remember to say or are they able to improvise with the actors?

A) Every year there are moments like this. Being interactive in nature, there is always improvisation. Yet, this is a precisely timed experience and the actors must keep the show going. They are pro at allowing improv while not letting it interfere with the story and timing. The show is also timed to an original, musical score (one of my favorite things!). So there are moments that the actors must hit, and they can’t let the audience get in the way of that. So in short, there is a mixture of both the impromptu and the scripted.

Q) One of the more unique aspects of Delusion is that guests are asked to “check” their phones before the experience actually begins. Have you ever considered making smartphones part of the experience as an investigational or navigational tool, etc?

A) I have not. I enjoy period pieces along with time away from technology. People look down at their phones enough already. All my plays (so far) have taken place early to mid 20th century.

Q) ScareLA has become a really large haunted attraction/Halloween convention in Southern California. We saw that you guys were holding auditions there, correct? How many actors is Delusion employing this year?

A) That was fun! Open calls can be both exciting and…surprising 😉 I have hired about 29 actors (only 19 work each night). I have to double cast certain characters to maintain the flow of the play.

Q) In closing, Jon, is there anything you can tell us about Delusion and why our readers should make it a must-see part of their Halloween season this year?

A) Delusion: Lies Within is a haunting tale that touches upon all elements of what makes a great and captivating story! I love creating something that allows people to escape for a time into a place we never get to go back to: our imagination-filled, childlike days. I am a hopeless adult. I want to be a kid again so badly, and this (along with my daughter) brings me, and others, back. Like I said earlier, let yourself go completely and be a kid again. Just don’t expect a haunted house experience or simply to be startled. There is great depth to this story. It is all about the story…and you! Many have returned more than once and gotten something new out of it each time. This’ll be great fun…I promise!

We would like to thank both Jon Braver of Delusion and Tad Hamilton of Mosaic PR for making this interview possible. You can checkout ticket information and more for Delusion: Lies Within at its official website.