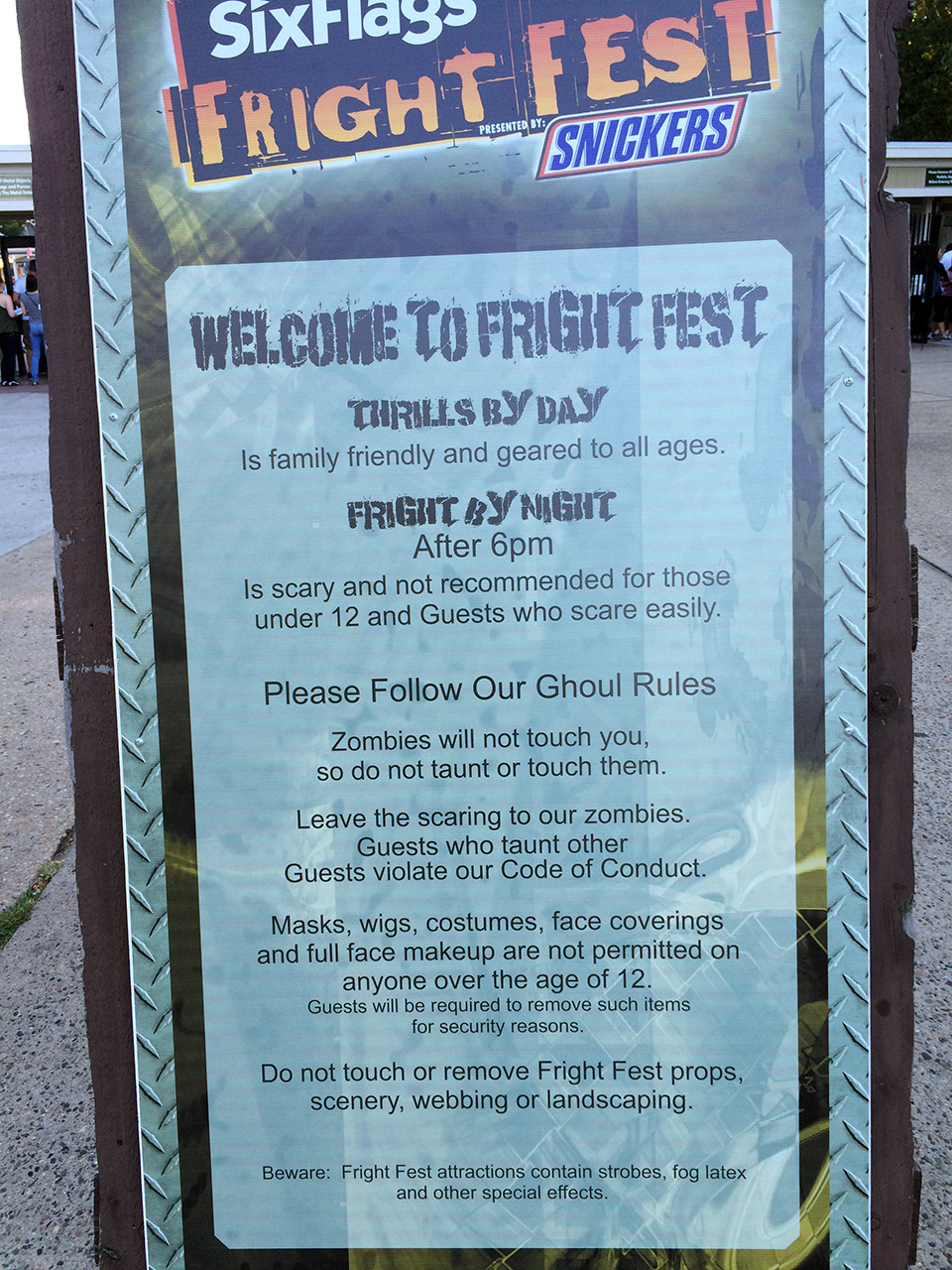 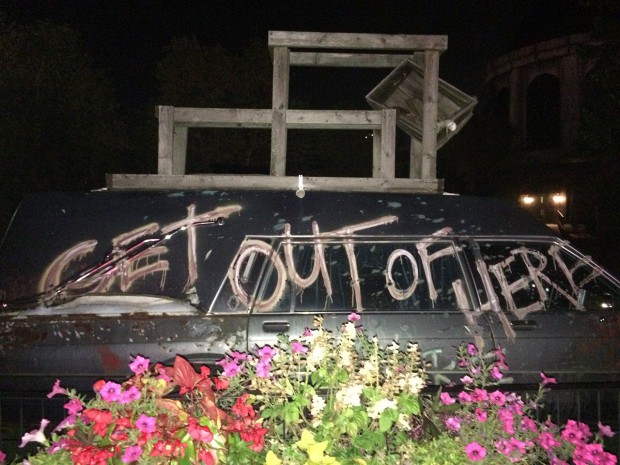 As a child, I spent many a Halloween season at Six Flags Fright Fest. There was nothing else like it; a chance to ride rollercoasters by day, and run in terror from ghouls and ghosts terrorizing us at night. Witches would pretend to be dolls and spring to life when people sat too close; hayrides would take us deep into the woods, where serial killers in hockey masks would attempt to chainsaw their way onto our ride. The park did an amazing job creating an atmosphere worthy of the holiday, and some of my fondest memories are attending every fall with my family, excited to be afraid.

This year, I attended Fright Fest for the first time in over a decade, all grown up but as excited to let the show scare me as I’ve ever been. The park has changed, of course; new rides like Green Lantern dot the landscape and chains like Cold Stone Creamery and Panda Express have replaced previously-nondescript food and drink stands. But the familiar frightening Fall festival has returned for its 23rd year, and while there are some obvious changes – haunted houses and trails have replaced the hayrides of my youth, I’m happy to report that it’s as an engrossing experience now as it has been any time in its history. The entire park is transformed; cobwebs cover the trees and buildings, eerie music is piped through the speaker system; the iconic fountain runs a blood red color. At 6pm sharp, a familiar tune begins to float on the air – a funeral march that sends chills down your spine, because it signals “The Awakening”. It means that nearly 200 zombies and ghouls have arrived and will be stalking the park from dusk until close. This parade of undead marches from one side of Six Flags to the other and is always a sight to behold. We didn’t follow them, but we knew they’d find us later, whether we liked it or not!

Since the sun was setting, but it wasn’t quite dark yet, we headed to a stage show and enjoyed the Dead Man’s Party, a fun and impressively choreographed song and dance routine that gave us some lighthearted entertainment, set to some Halloween classics (“They’re coming to take you away, ha ha!”). This was a nice start, and one of the few shows we managed to catch. The park has a number of shows on the program we were handed, including Ghoulmaster’s Ghosts (a dance and multimedia spectacular inside a castle) and the Spooky, Kooky Magic Show (new – a family friendly magic show designed to entertain and delight everyone). While I can’t vouch for these shows personally, it does seem that the park is really set up to entertain all ages, which is great if you have young ones that might not be able to handle the Terror Trails (or if you scare easily). 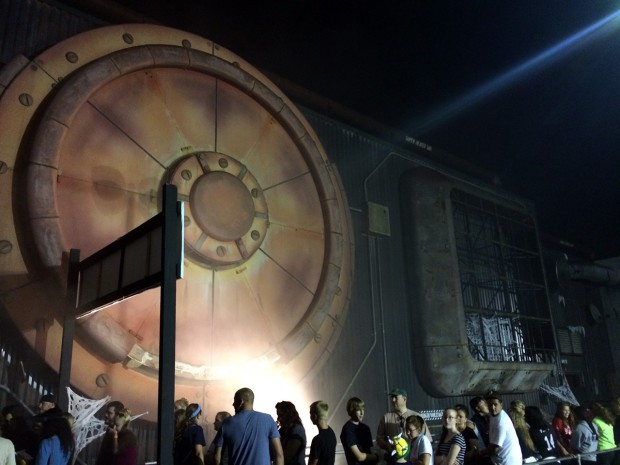 And speaking of the aforementioned trails, those were our focus for the evening. We had six trails to hit, spread out all over the park. Each had its own theme and its own variety of monsters lurking inside, ready to terrify patrons bold enough to brave the paths. I’ve broken these down below, with a brief description and overall impressions of each.

A terrifying trip through insanity, we walked past patients that had been, or were in the process of being, mauled and mutilated. Broken mirrors hung on the walls, side by side with writing like “Welcome to hell” smeared all over in what I can only imagine was supposed to be blood. Insane patients and worse lurked around every corner, in every shadow, and their deranged screams followed us throughout the whole trail. Bodies were contorted in strange ways, with these monsters walking on their hands, heads touching the ground. And then the chainsaws made their appearance, unrelenting, chasing patrons to, and past, the exits. People were genuinely terrified, and this definitely set the bar high for our night.

Wasteland was radioactive nightmare fuel. Inspired by horror classics like The Hills Have Eyes, this maze was a surprisingly long walk, bringing down our guard; every time we thought we were done, we’d round another corner and be face to face with more mutant terrors. The makeup work was top notch, with genuinely scary monsters stalking us as we maneuvered down a brilliantly themed trail, dodging big containers full of what we assumed to be radioactive waste (the cause of this horror, no doubt). We were with people that all but ran away from mutants on chains and leashes, being led by other, bigger monstrosities. And the environmental scares were used to great effect, as steam would blast from the walls or car horns would blare at the most inopportune moments, making people jump out of their skin and providing distractions that the monsters were happy to take advantage of. It wasn’t all fun, unfortunately; this path seemed to be a bit too rocky and treacherous for us, and we tripped over metal and other objects multiple times. That said, it’s still a very enjoyable experience, provided people really pay attention to their surroundings, or the park smooths the walk out a bit.

The new trail for 2014, there was a lot of excitement to check this one out. Unfortunately, this was our first disappointment of the evening. While the concept was fun and the environment looked and sounded phenomenal, this was anything but scary. The trail really suffered when the Six Flags staff let too many people in at the same time; we became part of a group of at least a dozen people, and it really brought the experience down. Everything became slow moving and cramped, and when the folks in front of us mocked the monsters and trail, it shattered the illusion we were trying to let ourselves fall into. Also, there was a surprising lack of alien-themed monsters; it seemed like we were being terrorized by the same types of ghouls we had seen before. That said, there is a surprise at the end that made me stop in my tracks; to say anymore would ruin the moment for those that may recognize the… thing…but needless to say I was scared stiff. Unfortunately, that wasn’t enough to elevate this maze to the heights of the others you can experience at the park. A shame, given the kind of out of this world material they were trying to emulate. 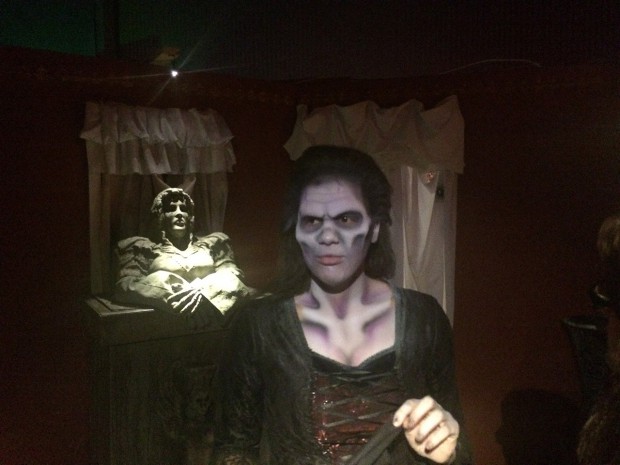 This was amazing. The actors and costumes were spot on; the set was exactly what you’d imagine a haunted voodoo village would look like. Severed heads on spikes lined the walkway, while dimly lit huts and chilling smoke dotted the landscape. Evil voodoo priests taunted us, while shamans tried to curse us. And an unspeakable horror awaited us at the exit. To detail it more would ruin it for those who haven’t experienced it yet, so let’s leave it with this bit of advice: do not walk into or through the dirt pentagram, whatever you do. And don’t turn around.

The premise is simple: up to six people hold onto a knotted rope, and whoever leads the group gets a small light to guide them through the pitch black darkness. However, this maze was more humor than horror; the ghouls stalking us made jokes and taunts in voices right out of Scary Movie, apparently more interested in making us laugh than making us afraid. And again, if you go in, make sure you have a good group, because the people we walked with absolutely ruined this maze for us, mocking and patronizing everything about it the entire time. That said, if you go with friends, and you’re at the back of the line in the dark, you may have more fun than we did. But otherwise, it’s hard to recommend with so many other cool attractions to see.

Our final stop of the evening, and the most ‘traditional’ of the trails, this haunted house had a great look to it. Unfortunately, it was short and didn’t have the scare factor of the other trails. There were a few cool elements, including a billowing wall that slowed people down as they walked and some deceptively fake looking monsters that genuinely frightened people that passed them unaware of their all-too-real and evil intentions. This is a short, simple, and somewhat fun romp, but isn’t nearly the thrill that Voodoo Island or the Asylum proved to be.

There are also scare zones like Circus Psycho, where zombie clowns have taken over the vibrant Boardwalk area. Costumed zombies and monsters stalk the whole place, but it’s in spots like this where they really stand out, doing a darn fine job scaring large crowds of people. Though there definitely seem to be fewer ghouls walking the park overall compared to previous years; perhaps most of them are assigned to the terror trails. This didn’t detract from our experience and we still had a blast, but it was noticeable and we overheard numerous people discussing it throughout the evening.

Your mileage may vary – that is the axiom that sums up our experience at Six Flags Great Adventure’s Fright Fest. There are some that would find this kind of entertainment silly; that would mock the employees trying their hardest to scare them or laugh off the mazes, dismissing them as predictable or worse. But I, and the group I was with, was all about it, happy to let the Halloween festival atmosphere wash over us and willing to let ourselves be scared by things that go bump in the night. I respect the lengths that Six Flags goes to in order to transform its theme park while also, well, being a theme park. If you’re willing to immerse yourself in it, suspend belief, and can appreciate what the company and its hardworking costumed staff are trying to do, I think you’ll agree that Fright Fest is a real Halloween treat. I’m very glad I could have fun now, considering how much I loved our trips to the park when I was younger. Highly recommended! 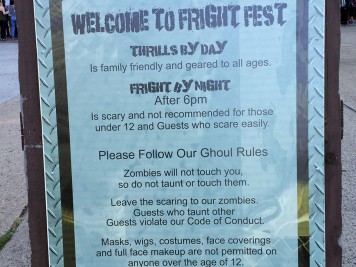 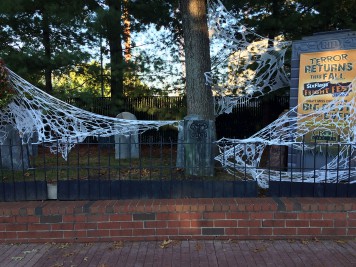 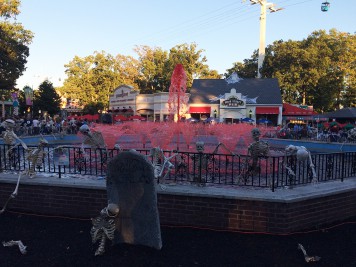 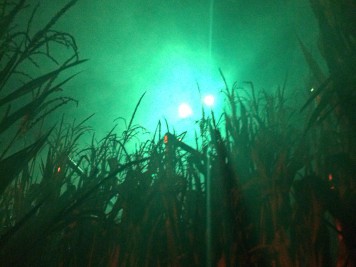 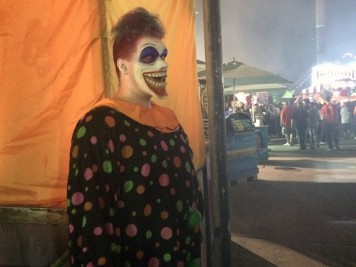 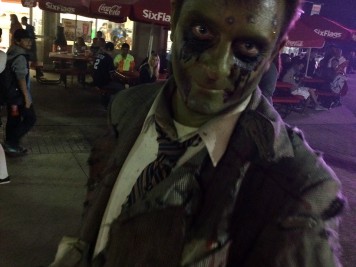 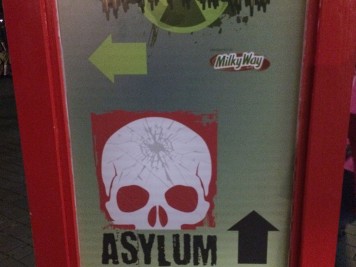 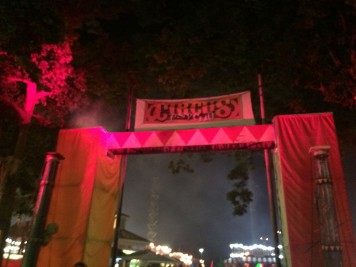 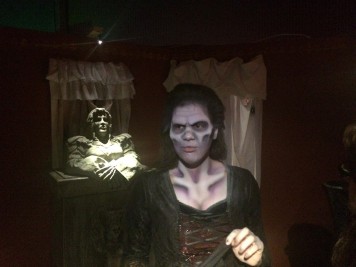 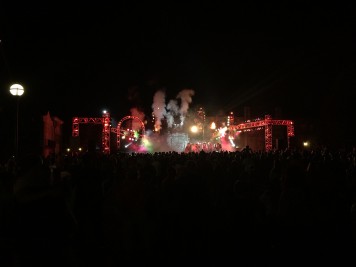 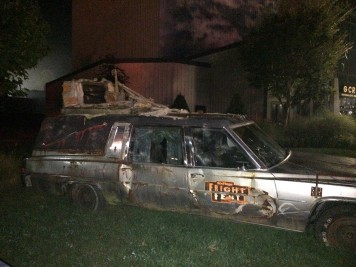 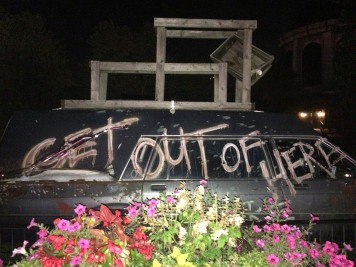 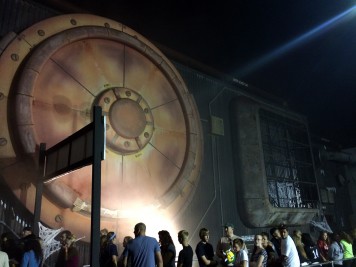