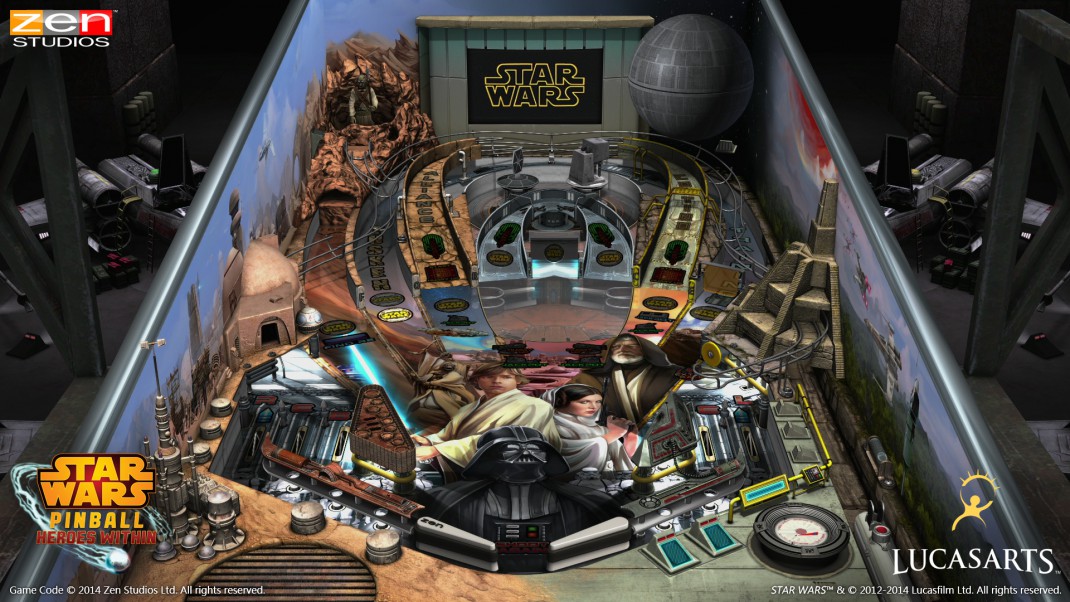 Just in time for May The Fourth Be With You and Revenge Of The Fifth Pinball Fx 2 has released a new set of Star Wars tables truly aimed at the franchise’s core fans with Star Wars Pinball: Heroes Within.

Hands On:
Pinball Fx 2 has mastered the physics of pinball like no other video game title out there and will probably only be outdone by themselves. The only time a flipper feels weak is when it is supposed to, the only time a bumper is sloppy is when that is the table’s setting. Skill shots feel as much in your control as if you were pulling a real plunger, simply put the bigger surprise on one of these tables is if they didn’t work perfectly.

The graphics on older core tables from the first Pinball Fx game have had updates and new tables like these Star Wars ones set benchmarks for all future tables to follow just as the Marvel ones had before. The tables are rendered beautifully and realistic where they are supposed to be realistic and where the Star Wars characters or bonus games play beyond real world physics they are done so well as to compliment the tables rather than distract from them. You don’t mind seeing Han Solo at the Millennium Falcon controls on one side or Chewbacca in the engineering back on the other because they flow so well with the table.

So the graphics and the physics are spot on which brings it down to gameplay or in this case table design. There are three basic types of tables and this set of Star Wars ones run the full gambit. Short tables play faster with more frantic flipper action, long boards tend to involve more skills shots and bumper action. Middle is a mix bag and can be even designed to play more like a short or a long.

First is Han Solo, a nice medium bordering on large table that gives you some room to play. The bonuses are outstanding, especially ones involving the Millennium Falcon that sits waiting for battle at the top of the table. Han Solo spouts lines through the entire play, many of which are either directly lifted from the movie or inspired by them. The voice acting is pretty good, a couple lines definitely sound like an impersonator but it is still a lot of fun to hear him call you a “fuzzball”. This table definitely has a feel and theming of the original trilogy.

The Next table up is Droids which at first I thought might be inspired by the animated series as some of the other Star Wars table sets has one or two tables dedicated to it. Instead it feels more like a deleted scene lifted from A New Hope. The droids are onboard the Jawa Sandcrawler crossing the desert and are trying to get the aid of other droids to escape to freedom. Jawas are watching closely though, ready to zap them at a moment’s disobedience. It’s fun to be able to get so much of a storyline out of simply playing a pinball table and paying attention to what lights up and what the bonuses are. It also can be extremely addictive as you get the Droids closer and closer to a way out.

Next is A New Hope and this table tries to tell as much of the movie’s story as possible while knocking a metal ball around on bumpers using flippers. Visually the theming is spot on but also the animated graphics and bonuses all try to interpret part of the story. For a true and loyal fan of the original trilogy this is probably the best of all the 10 Star Wars pinball tables. The voice work is terrific, all the characters you want to see from the movie make an appearance and all on a pinball table! This is truly a work of art.

The final table is Masters Of The Force: Holocron. This is a table which bridges all the movies showing your favorite force wielding warriors of both the light and dark side which is going to appeal to every play of Star Wars The Old Republic who expected to be more when they started wielding their sword of light. The slightly odd take on the iconic characters is their relationship to holocrons. Unless you are a deeper fan of the universe than the average film fan you probably have no clue what a holocron is. Some of the books have entire storylines dedicated to these buggers and you know a true Star Wars geek when they build their own replica. To try to simplify the definition as much as possible they are mini organic computers with AI gatekeepers. In the Star Wars universe holocrons (short for holographic chronicles) were used by the Sith to store vital information about the dark arts of the Force since let’s face it if there is one master and one apprentice and the master gets killed there goes the knowledge of the Force. It was later adopted by the Jedi as well.

On this table you are running around collecting holocrons much to approval of Yoda when you pick up a Jedi one and much to the delight of the Emperor when you get a Sith one. This table represents a struggle for the Force laden soul of the player as they bump and flip their way to their destiny. It is a neat concept and one that players of recent games such as the Force Unleashed are familiar with but might leave some casual players a bit in the dark, hopefully much like in our household someone with Star Wars books and games (and a few plastic lightsabers) is around to clue the player in.

Last Call:
If you like pinball at all this game is worth playing, if you are a fan of the original trilogy then Star Wars Pinball: Heroes Within is a must play. It made me wish I could afford to buy all the Pinball Fx 2 titles, particularly the other six Star Wars tables. I hear one is dedicated just to old school Darth Vader… mmm dark side, they have cookies.