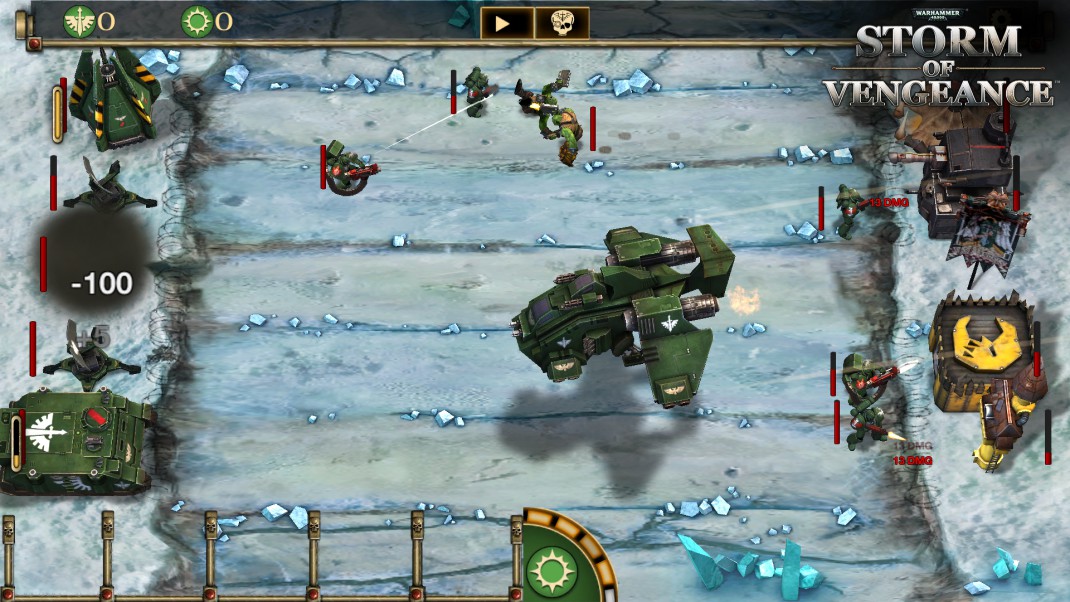 Eutechnyx and Games Workshop has brought us the latest video game from the Warhammer 40k universe with Storm of Vengeance, a tower defense/lane strategy game based off of the campaign pack of the same name from the miniature game and the novel by Gav Thorpe, “The Purging of Kadillus”. What this game boils down to is a game that feels entirely like a developer going for a quick buck by utilizing an easy game development type with a well known licence. For me, this feels like a movie tie in game, it’s that bad. For those of you that don’t know, Warhammer 40k has been an incredibly popular product licence since the eighties, coming out of the United Kingdom. This licence was originally a miniature game, but has since spawned spin offs into the board game genre, novels, movies, video games, and many other products. Storm of Vengeance is the most recent effort in a long line of mediocre attempts in bringing this universe to the video game industry.

The story of Storm of Vengeance originates from two sources, the campaign pack of the same name and the Gav Thorpe novel. The story takes place on the planet Piscina IV in the build up to the Third War of Armageddon. The Third Company of Dark Angels, led by Master Belial, come under heavy attack from an Ork invasion force, consisting of Bad Moon, Goff, and Deathskull tribes. Facing increasing numbers, Belial tries to defend Kadillus, but is faced with the choice of either trying to find a way to stop the ever increasing push by the Ork armies, or completely annihilate the continent that they are standing on, killing everyone.

The tone of the story is very similar to every tone of every Warhammer story, ever. The heroic few Space Marines must stand and defeat the massive armies of the invading and savage Orks by using superior technology and strong military strategies, all while praising the Emperor. While that is the obvious tone of this story as well, the feel of this tone never makes it to the actual game play of the game, since you have unlimited resources and troops to utilize, as long as you have objects that can generate them. Never once during game play did I actually feel over run and out numbered.

The story is told during the campaign by using text boxes with portraits of who is speaking. The dialogue is typical Warhammer universe stuff, “We will crush the Xenos!”, “Praise the Emperor!”, and all that. There is nothing new or exciting here, even if you are a fan of the license, like I am. I have always had an issue with the writing in the Warhammer universe, especially in the video games that come out. Characters are generally one dimensional, predicable, and without emotion. This game is no different. You get what you expect from the storyline, its’s just told in an uninteresting way.

Storm of Vengeance has a couple of game modes for the player to explore, a campaign and a multiplayer mode. The campaign allows the player to select one of two initial armies to play as, either the Dark Angels or the Goff Orks. Through DLC the player can add the Imperial Guard, Bad Moon Orks, and Deathskull Orks to your list of armies. Once you have chosen your army, then the story begins. Ultimately, the game is a series of battles that show up through a story mode with text boxes in between each battle, giving you little narrative about what is going on. Once you have beaten the set battle, then you move onto the next text box, then the next battle, and so on and so on.

The battles are set up on maps that utilize five lanes of attack. You place your troops and resources on the left, while your enemy is on the right. You have five spots to begin the production of troops and resources, so you must choose what to place in each spot to generate a certain type of resource or troop. For instance, for the Dark Angels, placing Comm Towers will generate the resources needed to play troop cards into a lane, but you need either a Drop Pod, Rhino, or Stormraven on one of the five spots to actually generate the troops. Each type of troop generator will create a different type of troop. Using the same three examples as before, the Drop Pod generates a standard Space Marine, the Rhino a Devastator Marine, and the Stormraven an Assault Marine.

You can also generate upgrades for your troop types, for instance Space Marines can be outfitted with Frag grenades that can be tossed into other lanes. You can also change the type of resources that you are generating to earn different types of troops. By switching resources, you will halt production on the typical Space Marines, but will be able to generate a member of the Ravenwing bike squad. I found that doing this would actually slow my game down, as it was much more efficient to just continually spawn Marines and over run the opposition.

As a Marine is produced, you can place that marine in any of the five lanes on the map. The entire point of the game is to defeat a certain number of enemy resource generators while defending your own. Each Marine type will have different characteristics when they are produced to help you defeat your enemies, the Assault Marine is much faster then the standard Marine, but the standard Marine can shoot into the next lane.

While the game play is tight for what it is, I just found it entirely too boring to continue. It was constantly the same damn thing, battle after battle. Place your resources, generate troops, select lane, rinse, repeat. Every battle felt like the last, and I knew that the next one was gong to be more of the same.

Storm of Vengeance’s aesthetics is very dull, with absolutely no character nor anything interesting about it. The visual design is generic Warhammer at it’s worst. The maps are dusty, desert landscapes while the troops look generic and exactly like each other. Even the text box portraits are colorless, static, and made to look like images through static. There is no voice overs during these text box story moments, the only time you get some voice work is during the battles, when the troops will call out random things when they are generated. The sound design is even more generic then the visuals, and just not worth really delving into. This game just looks and sounds like it had a quick development cycle and was rushed to market.

Warhammer 40k: Storm of Vengeance needs to be avoided at all costs, even if you are a fan of the licence. It is an uninteresting, colorless, and boring game with nothing to offer anyone, from the hardcore fan to the casual gamer. Games Workshop has seemingly peaked in the video game market with Space Marine that came out three years ago. Warhammer 40k: Storm of Vengeance is available now through Steam.