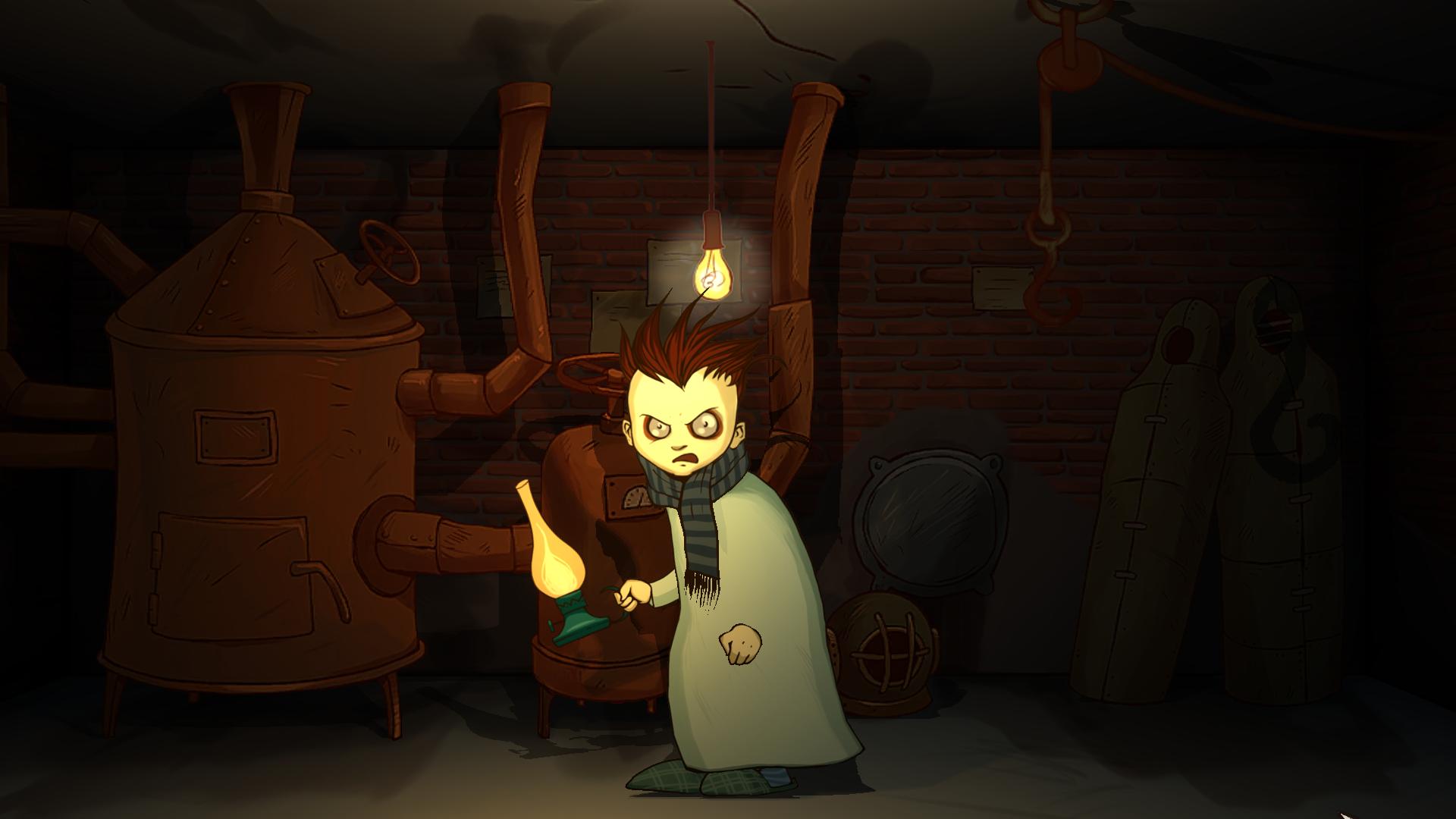 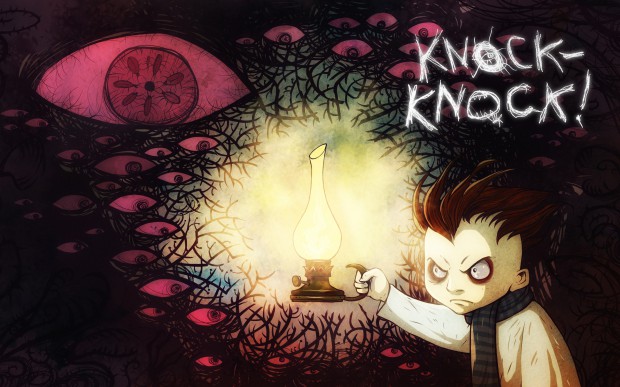 I love a stylized game, maybe the only thing I love more than a stylized game is a creepy stylized game.  I tore through Limbo, loving the puzzle solving, the stylized silhouettes and the crazy creative ways in which the poor character was torn apart.  Knock-Knock reminds me a lot of Limbo in the sense that is a puzzle game and in the fact that it is beautifully stylized, but then it departs onto it’s own stranger journey that tests your wits and creativity.

Description:
There is an unusual house standing in the depth of the forest. It served as a laboratory and a home to three generations of Caretakers. The last Caretaker has recently started noticing frightening changes in the familiar background as certain things fall down, and noises and grating sounds come from somewhere. Something strange is coming from the forest. During the night it even seems that someone makes himself at home in the shadows of the rooms, attics and basements…

The main character is sick of headache and is tempted to sleep, but he must not: there are unwanted Guests in the house. He has to stay awake until dawn, sitting up and trying not to let the fear drive him out of mind. The light is going out now: once the lamp goes dark it is time to hide. Meeting the Unknown itself face to face may drive him insane right away, especially with his unstable state of mind.

The only thing left to the main character is to try to bring the pieces of his world back into one: he mixes substances, notions, thoughts and reminiscences. The combinations may come out simple and evident, yet unexpected and frightening at times.

Walking around the house, avoiding to meet the Unknown, trying to concentrate, pulling himself together and holding on to his sanity, the main character counts the minutes until sunrise. Each subsequent night may turn out even more dangerous than the one before, but it is only during the night that the main puzzle can be solved: what is going on? Are the Guests real or are they consequences of insomnia? What happened to the forest? What is actually happening in the house? Where does the reality stop and the imagination begin? 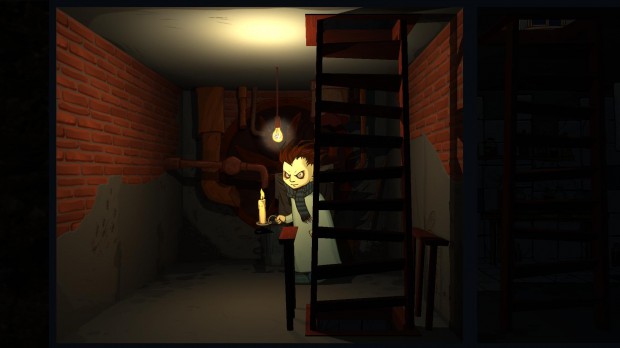 Features:
– Hiding. An imitation of playing hide-and-seek with nightmare creatures. A hybrid of Lode Runner, Home Alone and Nightmare Ned.
– Counting down until the sunrise. The goal of the gaming night is to maintain sanity until dawn. A gaming night (“level”) lasts for 7-10 minutes.
– Turning on the light. You can only walk in peace in the rooms where the light is on, yet the light is not eternal as it needs to be kept alive.
– Exploring the dreams. From time to time there are portals opening in the walls that let the unknown into the house, yet the main character can step forward and enter the portal himself to go inside a dream.
– Running experiments. The biostation has long since been used by researchers for various tests from simple and routine ones to absolutely absurd experiments trenching upon metaphysics. What the next synthesis will bring? Morphine? A ray of light? Nostalgia? Or just a cup of hot tea?
– Everything that happens in the house is a clue. Try harder and you would be able to expose the underlying mystery.

Hands On:
This is a journey around dark places where things go bump in the night and insomnia has taken a solid, terrifying hold.  Knock-Knock describes itself as a meditation, a found program built by anonymous instructions for some unknown goal.  If that doesn’t define mystery I’m not how else to do it, it’s like Blair Witch but with a found program instead of film.  Why was it created, why was it made, what does it all mean?  The game has solid creepy aspects to it such as hanging nooses, straight jackets hoping around on one leg, wraiths flying through the air and giant eyeballs looking through the wall and yet it is all existential, every thing you see is a clue and every clue brings up questions as well as answers and the answers add up to greater truths. 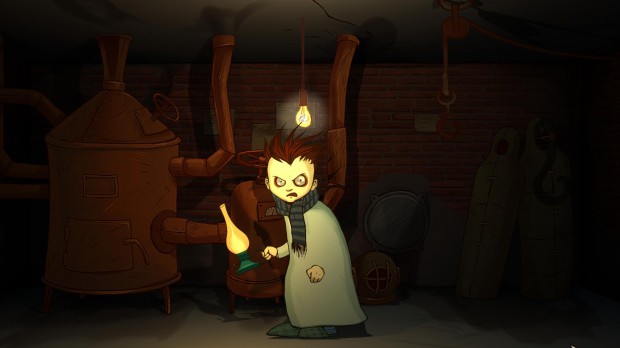 This all sounds very cerebral, which it is meant to be.  You can play the game just as a puzzle game trying to find your way through levels without caring why or what any of it means and it would be a stylized good play.  If however you consider everything said, everything that happens it is an amazingly deep game hidden behind simple play.  You use the arrow keys and the space bar to play and that is about it control wise.  You walk around trying to figure out how to beat the level which is easier if you try to understand the deeper meanings but isn’t necessary.  Also not necessary is turning off all the lights, turning up the sound and playing it in a room or better yet a house all alone, but wow does it add a lot to the game and it’s creepy atmosphere made with dark rooms, strange sounds, haunting voices and strange things moving around.

Despite the creepy atmosphere you don’t die when things go wrong for you, you just start over at your same starting position, waking up in bed.  No gore to be had, no fighting beasties, just simple wandering to learn what the house has to tell you if you are willing to listen.

Last Call:
I’m so glad I got to go hands on with this meditation, this found program written by anonymous hands.  Knock-Knock is a stylized game on the surface that dives deep for any willing to take the journey.  Wander the rooms and woods, discover things about the house and yourself and in the end face your demons by lighting one room at a time.