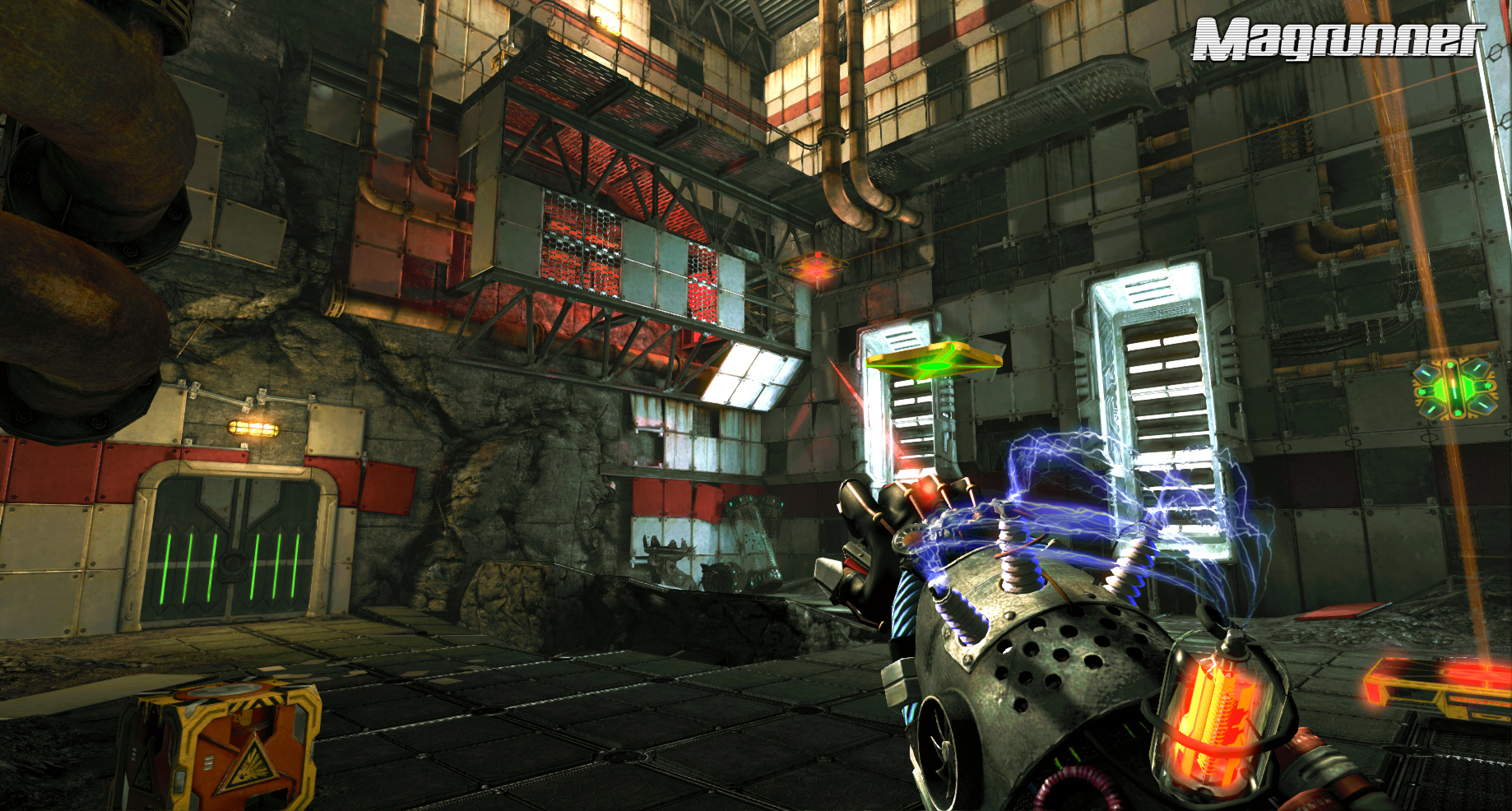 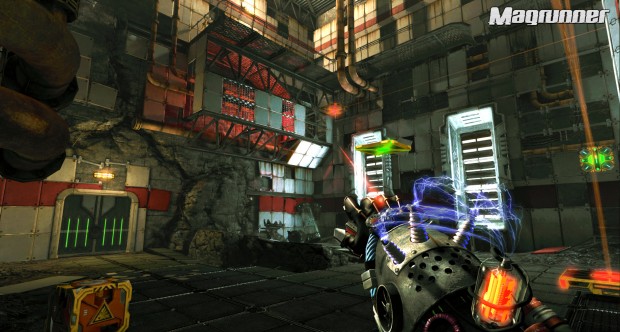 GLaDOS Fhtagn! Here’s a question for you that I thought I would never ask, “What would happen if the world of Portal existed within the Lovecraftian Cthulu Mythos?” Well, the developers over at Frogwares must have had that same question floating around in their heads, because Magrunner: Dark Pulse attempts to answer it. What is essentially a Portal clone, Magrunner: Dark Pulse uses magnetism instead of portals to solve the game’s various puzzle levels, all the while hinting that the Cthulu cult is alive and well. While it is an obvious Portal knock-off, Magrunner: Dark Pulse has a lot of good things going for it that quickly rescues the game from being dismissed as just another clone.

In Magrunner: Dark Pulse, you play as Dax Ward, a young man who is equal parts cocky athlete and super-genius. You are one of the elite few individuals that have been given the chance to compete for the honor of becoming one of the first “Magrunners”, a new breed of space explorers. Being one of the entrants that does not have massive corporate backing, you are immediately seen as an underdog, especially since you had to build your own magnetic glove. All things are going well, until you begin to hear the whispers, mentioning phrases such as “Cthulu Fhtagn” and places such as “R’lyeh”. Then, the shiny and new world of Magrunner: Dark Pulse begins to sink slowly into the depths of the mythos created by H.P. Lovecraft and August Derleth.

Story progression occurs through the holographic imagines that can be seen either through your glove or between levels in the elevator. Magrunner: Dark Pulse has a decidedly more serious tone than Portal, and without the character GLaDOS chastising you the entire way through the game, you will quickly realize that there is something missing. Frogwares tries to fill the void of not having a GLaDOS type character, by bringing in the heavy hitter that is the Great Cthulu. Cthulu, for those of you that don’t know, is a creation of the writer H.P. Lovecraft and is a giant Elder God that is destined to destroy the Earth.

While the inclusion of the Cthulu Mythos is a huge plus for Magrunner: Dark Pulse, I feel that the developers missed what made that mythos so special and chilling in the first place. What makes the Cthulu Mythos unnerving is that it is always that evil just beyond the sight of the human race. We only catch glimpses of it, and that makes it more terrifying. Think of this in terms of Alien versus Aliens. Even though we never get more then a glimpse into the world of Cthulu in Magrunner: Dark Pulse, it never quite reaches the correct atmosphere that most Cthulu games should have. 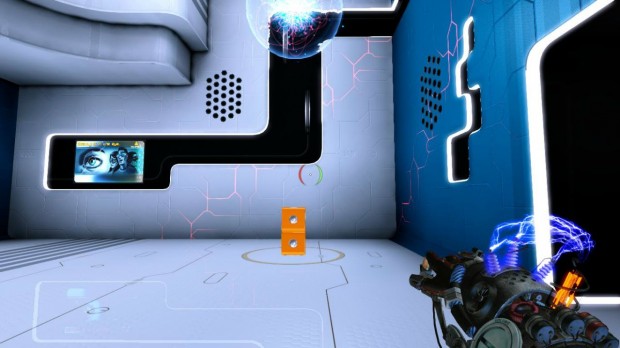 Magrunner: Dark Pulse takes its game play straight out of Portal, except that it switches the portal device with a magnetic glove. Dax has to use his magnetic glove to create positive and negative magnetic fields to solve the various puzzles to exit each chamber. This type of game play will feel very familiar with those of us that played both Portal and Portal 2, but will be different enough to force you to see the puzzles in a different way. In order to reach your objective, you will have to charge certain objects around the room to either make them magnetically attract to each other, or repulse from each other. You can turn on and off a visual indicator that shows you the magnetic fields within the room, which really helps in seeing if two objects are close enough to each other to be affected by the magnetic fields.

While the game play of Magrunner: Dark Pulse feels right and is a decent amount of fun, the one thing that it does do is limit the ways you can solve the puzzles of the game. What made Portal so brilliant is that a player could solve a puzzle a variety of different ways, even in some ways that the developers never thought of. This gave Portal a much more deep game play experience for the player. With Magrunner: Dark Pulse, you are only able to magnetize certain objects, so this really only allows you to solve the puzzles in a few certain ways. Some players might not notice this lack of variety in puzzle solving, but those of us that played Portal multiple times will be able to see it almost immediately.

Besides the lack of variety in solving Magrunner: Dark Pulse’s puzzles, the game does everything that Portal did, but with less polish and character. The game play here is solid and works very well, but will always remind you of the better puzzle solving game that is out on the market. The magnetic mechanic works well for this game, but it does limit the amount of items that the player can interact with and the ways that puzzles can be solved. The game play really just made me wish I had my portal gun in my hands again.

The aesthetics for Magrunner: Dark Pulse are as generic as it can get. When I first saw the art for Dax Ward, I couldn’t help but be reminded of character designs for games from the 1990s. In some press releases, Dax even has a baseball hat on in reverse, just offset enough to complete the look of someones idea of a cool guy from fifteen years ago. The rest of the game’s aesthetic are much more in line with what I would expect form a Portal clone: Clean, sterile-looking chambers that soon give away to the dirty and rusted behind the scenes backdrop. I feel that the developers also missed the boat when it comes to designing the aesthetic around the Cthulu Mythos. Magrunner: Dark Pulse never truly looks like a game set in the Cthulu World, instead it feels like a game that has Cthulu in it to help drive sales up. Being a fan of the Lovcraftian Mythos myself, I feel that the game just misses out on that particular aesthetic. 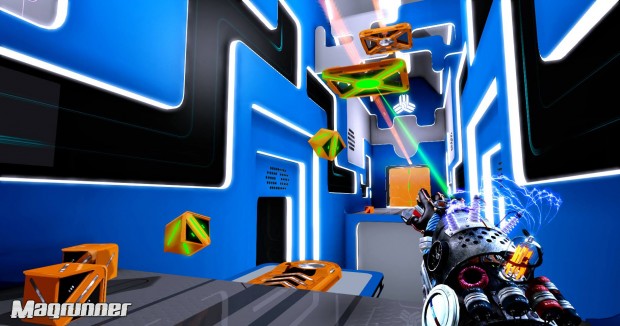 Voice acting and sound design here do the job and do it in an average way. Nothing particularly spectacular about how the actors deliver their lines, but nothing horrendous about it either. The characters end up feeling a bit two dimensional because of this, and the Cthulu Cultist hiding out in the corporate world of Magrunner: Dark Pulse will be pretty easily discovered early on. Again, I feel that the developers missed some opportunities to mess with the players’ minds by having distorted audio ques throughout the game, foreshadowing the coming of Cthulu. The entire premise of the Cthulu Mythos is the slow, spiraling decent into insanity, and the developers could have played with the minds of the players much more by using visual and auditory ques more then they did.

When it comes down to it, the biggest problem that Magrunner: Dark Pulse faces is its comparison to Portal – arguably one of the greatest games of all time. Too many times during game play, my mind would drift off to the good times I had playing Portal while GLaDOS tortured and ridiculed me. Frogwares tries to supplant GLaDOS by bringing in the heavy hitter, the Great Cthulu, in order to draw in fans of H.P. Lovecraft and his Elder Gods. As a fan of the Cthulu Mythos, I feel that the developers just didn’t quite get what makes Cthulu so interesting to begin with, and missed the boat when it came to designing the visual and the audio for the game. Insanity has always been one of the main themes to the world of Cthulu, and it is absolutely missing in Magrunner: Dark Pulse. The game is still a good time to play, and the magnetic mechanics work well, but you will end up missing your trusty portal gun the further you delve deeper into Magrunner: Dark Pulse.