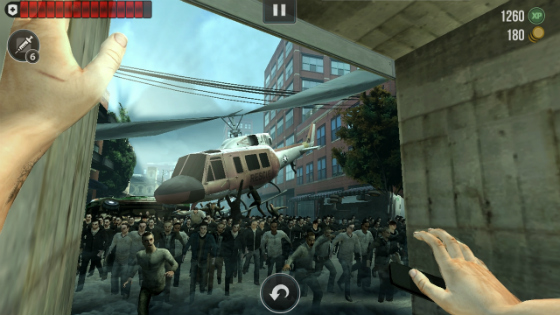 I’ve been a big fan of the book World War Z for several years now – actually, to be more accurate, I have been a fan of the audio book.  Considering the story is supposed to be an oral account of the events, and the production managed to draw in actors from all walks of Hollywood, this is  the definitive way to experience the original work.  The voice acting is stupendous and, though you may recognize most of the voices, they really do take on the tone of the characters they are representing.

That being said, the new movie coming out is supposed to have just the barest resemblance to the initial work. By all appearances, it is a whole different story with nods to the original.  I’m okay with this simply because to do the book justice would require a several hour mini-series with an all-star cast (Editor’s Note: Studios, DO THIS!) so if you can’t do it right don’t really do it at all.  Make an action movie full of CGI “zombies” instead of a retrospective on the human condition. I’ll go see it, grin at all the references to the original work then go back to listening to the book on CD.

It is with this same approach that I came at World War Z game for iOS which, thankfully, doesn’t even pretend to be the same as the book or the movie. Instead, the game tells the story of a dad in Denver committed to getting to his son in Japan during the beginning of World War Z.

Offering a fully immersive experience, players are dropped into the middle of the World War Z chaos. Casual and core gamers will both love the game’s action-packed first person experience and electrifying story. Featuring 28 visceral levels, intense combat, engaging puzzles, upgradable weapons and armor, an unlimited challenge mode, and a global scale, this game challenges you: play to survive.

“We loved the rich world that the filmmakers created, and are thrilled to tell a story that runs parallel to its film counterpart,” said Amy Powell, President of Paramount Digital Entertainment. “We wanted to give audiences a chance to truly live the movie in this story-based game.” 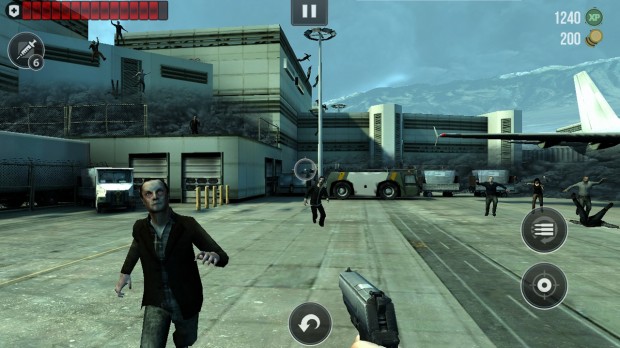 “We were excited to be able to use the cutting-edge Unreal Engine 3 to bring World War Z to life,” said Chip Sineni, Phosphor Games Studio Director. “Our goal was to build Paramount a AAA game, and with that came all our favorite bells and whistles, like ambient occlusion lighting, multipass blended textures, and hordes of enemies to fight.”

First off, the game is extremely well-detailed and stands up whether being played on iPhone or the iPad devices. The Unreal Engine 3 is put to great use as the first person experience pulls you in and makes you jump at different points in the game.  While not playing up on the gore at all, almost to the point of being prudish for a zombie game, there is detail in the entire environment – whether it is a pile of garbage on the ground or a flesh eating “Zed” charging from behind a wrecked school bus.  Each environment has its own feel and the details really help bring that home and keep you in the game.

The story is engaging too.  You want to help this father on his seemingly impossible trip to be reunited with his son in a world of zombies that pile up higher than buildings and many of which look like Uncle Fester (it’s understandable you can only have so many zombie models but having some with very unique looks make them stand out more in repetition).  The cinematic cutscenes help the story along nicely since the cutscenes are seamlessly edited into the action and are done in identical fashion to the gameplay.  What bit of story I have given away is revealed in the first few minutes of play so no worries about spoilers.

Gameplay consists of four basic actions: shooting, looting, melee fighting and puzzle solving.  The shooting is excellent in the game with the option to auto-shoot when a Zed gets in your path or having it so that you can control the shots. Either way, it is easy to control and use in the game.  Looting is a matter of clicking on objects. If it is an item such as a book, you can loot it from across the room. If it is a corpse or a drawer you have to get up close and possibly trigger an attack.

Melee combat, however, was where things weren’t so hot.  Melee fighting is clumsy at best and downright game stopping at worst.  The concept is well thought out: You can swing your weapon, dodge a zombie’s attack or push them back.  The problem is that, both on the iPhone and iPad, these controls aren’t very responsive and can take you from full health to dead in seconds.  For example, you walk into a room where a zombie gets the jump on you.  He bites you immediately knocking down your health considerably, sometimes you can try pushing, dodging and swinging and he will not be knocked off of you. You die and have to start back twenty minutes in the level.  You’ll try to kill it the next time and, maybe you do, only to have the next melee surprise attack zombie take you out and put you twenty five minutes back in the level.  You get the idea.  This frustrated me so bad that I saved up for one of the best weapons in the World War Z universe, the “Lobo”, and was excited to get to work with it only to see the same results…  The only real saving grace of it is that you get to keep the experience you earned in the level before you die and experience is currency (a smart idea since you would get better with weapons and armoring the more experienced you become) so you can save up for the Lobo or a better gun or upgrade your armor from newspapers wrapped in duct tape to metal plates – giving you a better chance of surviving encounters where the melee is stacked against you.

The last bit of gameplay to talk about would be the puzzle aspects which can be remarkably simple to downright obtuse.  I pride myself on solving puzzles, having reviewed and played dozens and dozens. In World War Z, some of the puzzles were designed to be failed on the first try in order to trigger waves of zombies. On these puzzles you seemingly have to guess from a whole bunch of choices rather than figure them out.  This wouldn’t be so bad except these are often at a long section of gameplay so that, if you don’t survive the wave, you have to play through a whole section again to try your luck once more!

This game is worth playing for the visuals alone but by adding a new story to the World War Z universe that happens in parallel to the movie’s story, five bucks is a pretty reasonable price.  Playtime is estimated to be about 4 hours – longer if you farm for the better gear which, let’s face it, to properly experience the game, you should.  Just accept that melee isn’t always going to be your friend and the puzzles might be more random guessing than actual deductive reasoning.  World War Z is a must play for would-be zombie hunters out there.
[easyreview title=”World War Z (iOS) Review Score” cat1title=”Overall Score (out of 5)” cat1detail=”” cat1rating=”4″ ]