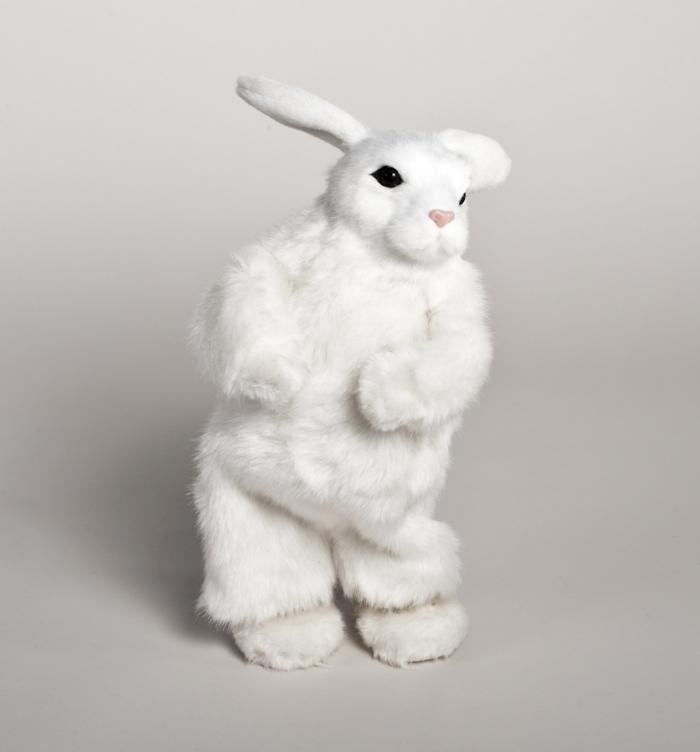 At CES, I saw all kinds of new tech and gadgets. Among all the tech I saw, some of my favorites were the robotics and toys, two things very close and dear to my heart.  There is probably something Freud would say about that, but he is dead and CES is once a year.  So, when I got some chance, free time, I wandered around taking in the sights. One booth that stuck out in my mind featured a line of cute animals dancing on their hind legs to music emanating from within them.  Down the table from them was this bunny… 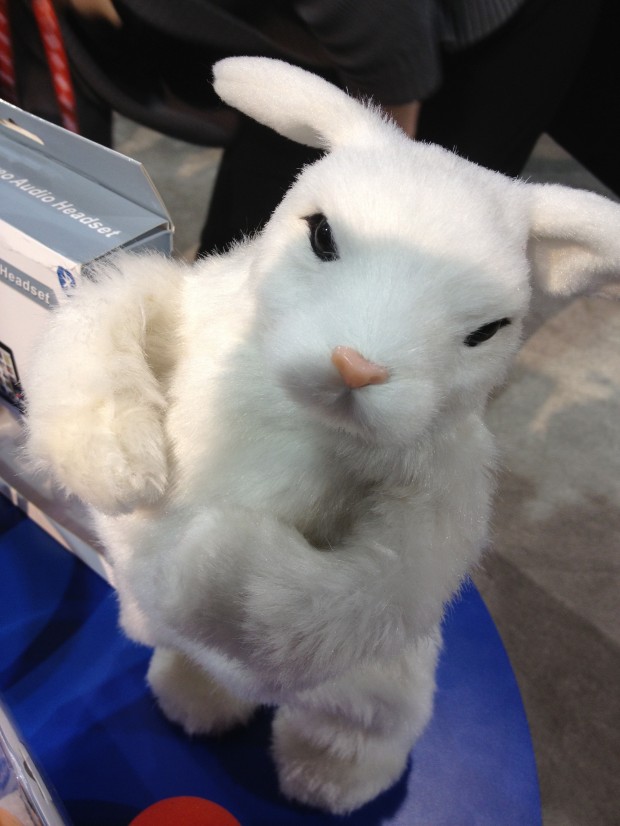 What are you lookin at?!?

He seemed to glare at everyone passing by as if saying they weren’t worthy to see him dance.  There were all kinds of the “Party Animals” dancing robots around, some even Halloween themed (anyone who knows me knows I am an absolute sucker for Halloween stuff).  But Russell The Rabbit, as I would discover his name was, looked like a bad ass.  Sure, he may dance to cute little tunes for your kid if they wanted but he would also rock out hard at a beer pong party. He would blast music that party goers may forget but through their next, hangover-ridden day, they would remember those eyes glaring at them.  I had to possess it….

These adorable plush animal speakers dance slow to slow music, fast to fast music, and stop when your music stops. All you need is a laptop, MP3 player, or other music device with an audio input to make them play your music and dance to the beat!

When Russell the Rabbit arrived, he looked no less angry, much to my delight.  This product line is great for kids of all ages, and most are extremely cute and cuddly.  Russell is for those who don’t do cute and cuddly so much and his expression practically demanded that I release him from his packaging. 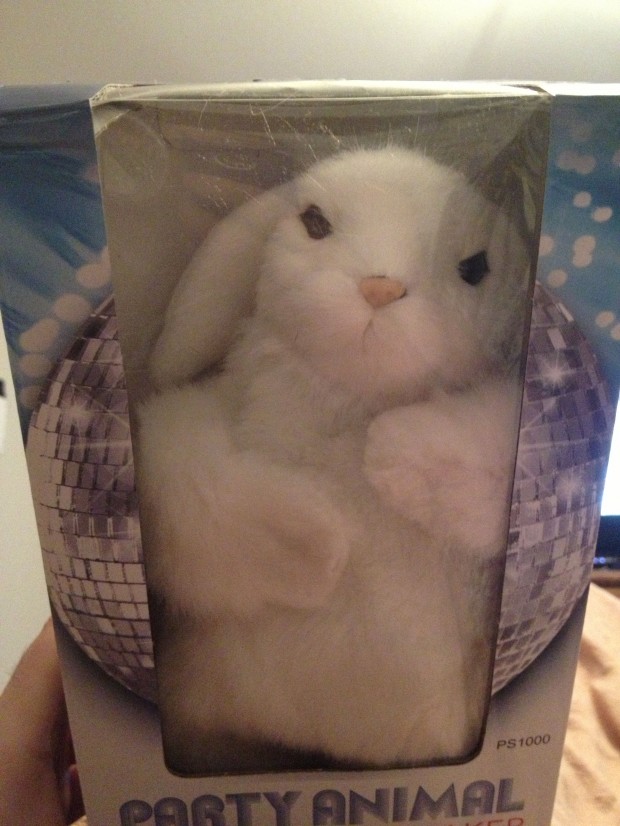 I released him at once and, like a kid carrying a well-earned trophy (I did bug my EiC to request him), I proudly took him to my laptop and plugged him in.  The speaker reproduced the music, loud and clear, with no dampening or distortion  If I didn’t know the music was coming from the rabbit  I would have thought it was just my laptop speakers.  The Party Animals are designed to be completely portable and self-sufficient, so they run on AA batteries and have a standard audio plug for your computer, smartphone, MP3 player, etc.  In fact, let Russell the Rabbit loose on all those devices with great success.  I chose the laptop first though because I could go on different websites trying out all different forms of music to see what his dancing seem to match up best with.

Country worked fine, though that was probably one of the weaker genres. Classical, on the other hand, just looked plain silly.  Give him anything with a rockin’ beat such as alternative, classic rock, hip-hop or dance and he seemed right at home.  I found myself on YouTube and, yes he does the Harlem Shake pretty darn well.  There is a sensor in Russell and the other Party Animals that senses the tempo of the music and adjusts accordingly.  So, if you put on easy listening he will sway to the music while rave stylings will make him shake his bunny tail furiously – which nicely fits, since he doesn’t look happy about it.  He danced fine to children’s tunes too, which I could see encouraging rhythm in younger developing children as well, though probably the other cutesy Party Animals might be more to the kiddies’ tastes.

When the volume is low, the motors can be heard whirring so I tried the off dance button at those times so as to still get the music without the distraction of the mechanics. For some, this might not be a distraction since this is a mechanical rabbit dancing on its hind legs – sci-fi machinery noise is kind of a plus.  Once you crank up the music or stand a few feet away, the whirring noise is generally drowned out.

Great Sound And A Good Cause:

Russell the Rabbit and rest of the Party Animals also support good causes.  With each purchase, donations are made to PAWS Chicago, The Anti-Cruelty Society and PETA and small flyers with information on the organizations in a family friendly manner are in the box. They aren’t like those Sarah McLaughlin tracked commercials that make you cry like you  just shot “Old Yeller”.

I now possess Russell The Rabbit and he sits next to my computer glaring at me for typing instead of playing music right now.  I can feel him staring when I look away and, for me, that is a great thing.  The other Party Animals are great, cute and there is one for just about every personality, even seasonal ones which would work great at a Halloween or Christmas party, for example.  For the older crowd who like a fun toy, but are not so into the cutesy kind, get one of Russell’s brothers, I think they are named Russell too.