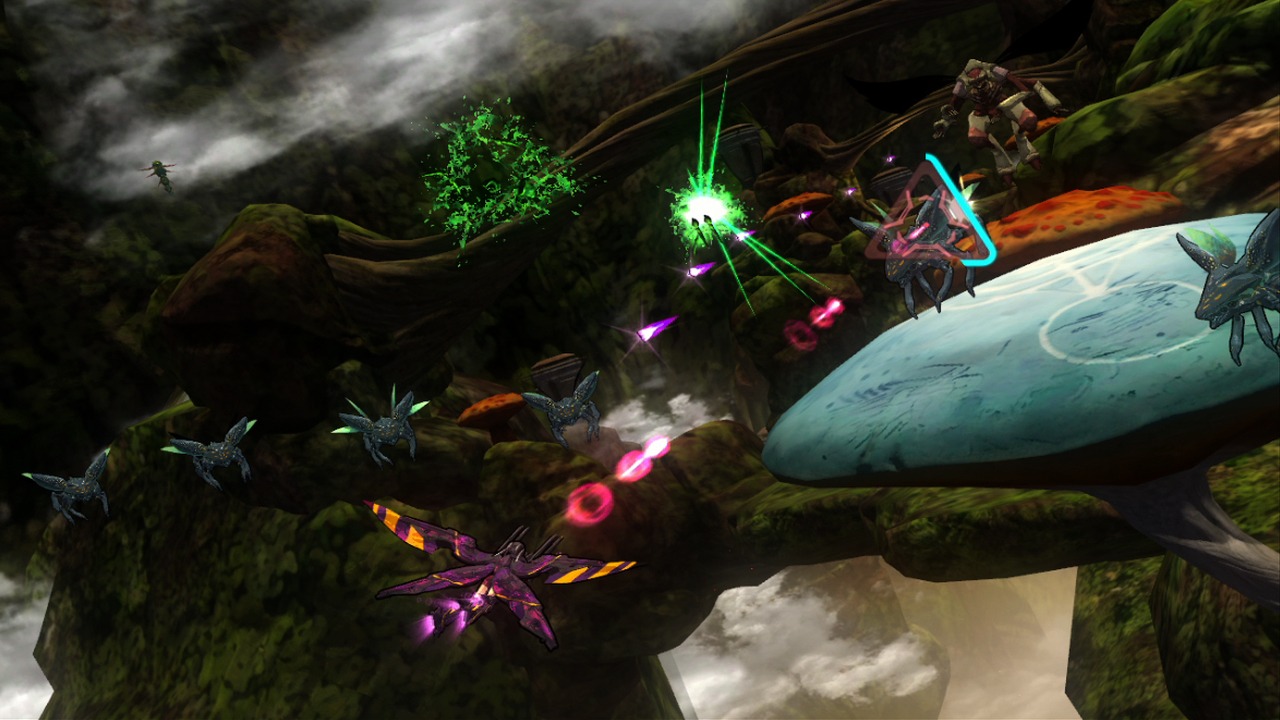 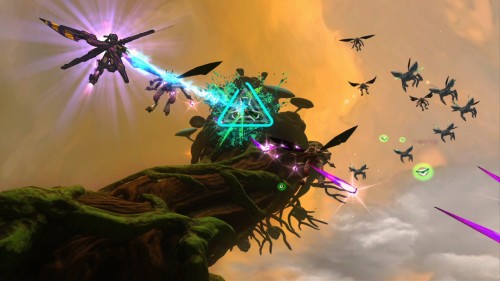 So way back in the ancient days of a little box known as the Atari 2600 (you may have seen one in a museum or Antiques Roadshow), Atari put out an insanely addictive game called Yar’s Revenge.  In 1981 if you were a gamer you either had the game or had a friend who had the game and you played it a lot.  The game was revised and revisited several times over the following years on different platforms before finally getting completely re-envisioned 30 years after it first came out.  The question is, should you re-envision a classic or just leave nostalgia alone?

Smartly dumping any semblance of the original game look the creators went for a cross between comic book and concept art style making it feel almost more like an interactive comic rather than a standard video game.  The graphics remind me slightly of Borderlands in the sense of heavily outlining characters and shading style and everything is crisp and sharply finished with rich colors.  Atmosphere wise it creates a claustrophobic train-out-of-control sense since it is a rail shooter and the blasts coming out you are really large and though you can fly around the screen and even do flip dodges you have no control over where you go.   Audio consists mainly of calm music tracks and intense ones to fit the action and a few weapon sound effects.  This might be one of the biggest lacking points in the game since while you are fighting things like crazy the storyline continues in a little dialogue box in the corner.  Voice acting would have made a huge improvement on the game and made the storyline far more engaging.  For the most part you get part of the storyline from cutscenes between levels (which have subtitles and no voice acting) and the tidbits you manage to catch by glancing in the corner while flying through battle.

Game play is pretty straight forward though there are obvious signs that it is a port that really should have been changed.  Primarily you move around the screen using WASD to dodge incoming enemy fire while using the mouse to move your target sights around and fire your two standard weapons.  Extra timed weapons can be collected throughout the level and they and the shields are assigned buttons 1-5.  On your screen however it says these special weapons are located A, B, X, and Y with the symbols and letters displayed on the screen in their corresponding Xbox controller locations.  You just have to memorize which button does which or hit them randomly to see what works.  This is easy enough to get past but this plus references to joystick on the mouse menu and a vibration option when the game isn’t game pad enabled make it seem like they rushed to port it.  Along these same lines I had multiple mouse targeting issues even after trying more than one mouse, downloading the game twice and re-installing it three times.  The game play is fast and furious and fun, but the targeting issues did diminish it a bit to the point is felt more like playing Tempest than Yar’s Revenge sometimes. 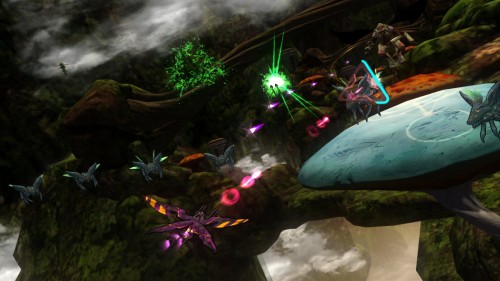 The enemies are fun to fight and different weapons work better in different circumstances so a bit of strategy and timing are key to racking up the scores to really high numbers and sometimes the number of enemies gets daunting.  The boss fights are fun and challenging and all seem to have their own style and defense you have to overcome.  The enemies throughout the levels probably could have used a bit more variety other than just color changes but it is still fun to just blast the heck out of everything you see on the screen.

Feeling A Little Left Out:

Let’s face it a lot of games replayability depends on the extras such as in this case achievements and leader boards.  Plenty of gamers want to be the top of the board and will replay over and over until they get all the achievements.  On XBLA you can earn 200 points between all the achievements making those who strive for a high gamer score play hours upon hours.  On the PC however the leader boards and achievements are disabled leaving you to look them up on the web to even know what you are missing.  Even if you didn’t earn points by playing it on the computer the option to achieve those achievements and therefore get lots of replay would be really nice.

Yar’s Revenge runs about 3 hours with a total of six levels.  The levels are very long and the fighting is fun but it still feels short.  And on the PC you can replay it if you want, maybe to see what aspects of the storyline you missed or just to blast away with different weapon choices but really for the computer it is a one time play.  The price is the same for the PC version as it is for the Xbox and is really affordable at $10 but you aren’t getting as much game as you get on the console.

Yar’s Revenge is a fun game with nice looking graphics and lots and lots of fun shooting.  At $10 it definitely affordable too.  I have to say though that I wouldn’t highly recommend it for the PC, if you have an Xbox pick it up on there, you will get much more play for your money and it would make a decent party game with co-op drop in and out available.