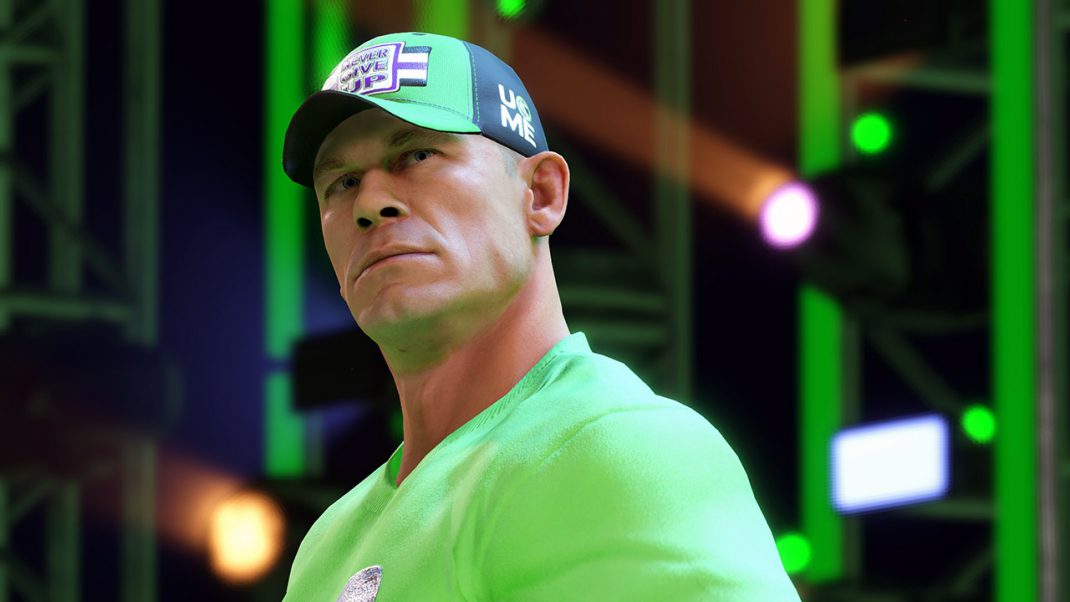 The world of professional wrestling is an interesting one – a world that I fell in love with as a young boy in the 80s.  I think what still draws me to the sport is the duality of it all, the spectacle of professional wrestling.  On one hand, professional wrestling is scripted, with individuals playing characters and working with their opponent and referee to put on a show for the crowd.  On the other hand, serious injury and even death can occur if the actual match isn’t taken seriously by all involved.  Nightly, these wrestlers put on a show and put their lives and bodies in danger for our amusement.  From the indie circuit, to the weekly WWE or AEW shows, wrestlers take their craft seriously and it draws a crowd each and every time a show is put on.  That is why I was excited to check out WWE 2K22 from Visual Concepts and 2K Sports.

WWE 2K22 has a pretty robust story mode called MyRise, with features story line differences if you create a female or a male wrestler.  The first thing you do in MyRise is create your character from the Creation Suite.  The Creation Suite is a pretty standard character creation system, but felt largely unintuitive for me.  In fact, I had accidently deleted my character twice during the process trying to play the MyRise campaign.  You do have tons of options here available to you, including uploading images to use for your wrestler.  You also get to select the size of your wrestler which then dictates the category she or he will wrestle in.  My issues really come from not finding certain aspects of the character I wanted to change where they would normally be in other games, such as hair or facial hair.  Normally those would be found where you tweak skin color or facial features, but the Creation Suite placed them in the attire section.  Also, I never could see where I could change my height and weight, so I was eternally stuck at the 5’9″ height for all of my characters. 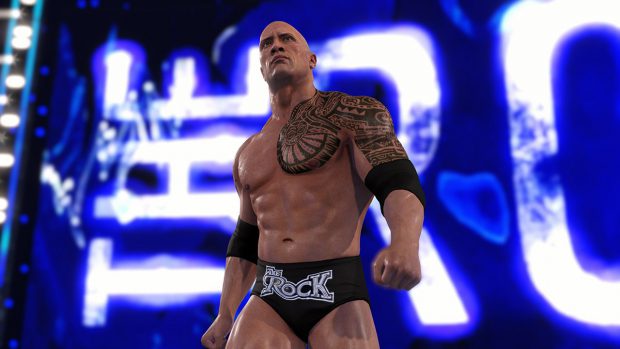 The MyRise story line is pretty generic wrestling story fair.  You show up to the WWE Performance Center to begin your rise as the next WWE superstar.  Your character is fully voiced, though you have no choice in what that voice sounds like, so my character looked and sounded like two completely separate people.  Your character is introduced to 3 other competitors at the Performance Center, and your two trainers, Road Dogg Jesse James and Shawn Michaels.  You will make decisions that will either lead to your character being a babyface or a heel, wrestling terms for a good or bad character.  You are offered matches either through character interaction, at the Performance Center, or even through your Twitter feed.  Once you accept a match, you are immediately rushed to that match, which would lead me to wonder what other opportunities did I just miss.  I would much rather have a series of options laid out for a set time period then select from those matches.  The way it’s set up in the game right now makes me feel like I’m missing out on other things too much.

So the MyRise story was pretty decent as far as stories go.  You have a lot of control over what your story will be like, and alot of options to choose from.  I do feel that the story was a little more tame then what I would be looking for as an adult fan.  What if felt like was WWE really trying to push for a PG wrestling story line, instead of something that could be seen as an actual story of a coming up wrestler.  I found this in other aspects of WWE 2K22 as well, like having the word “ass” censored from Road Dogg’s iconic entrance speech.  You will gain points that you can put into your stats to customize your character, and all of the gear is available to you from moment one without having to unlock it or worry about loot boxes.

WWE 2K22 is full of things to do, even if the MyRise thing isn’t your particular death match.  You can just jump right into a match and set all the parameters for it, from type of match, to location, to rules, and participating wrestlers.  You also have the 2K Showcase, MyFACTION, and MyGM modes to play with as well.  2K Showcase follows the career highlights of Rey Mysterio.  You get to relive some of his most memorable moments and matches. 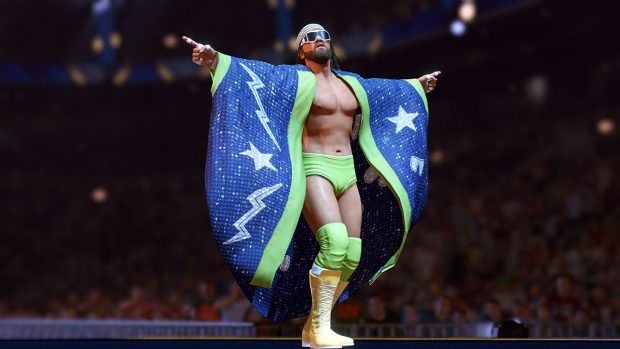 The MyGM feature was my next favorite feature of the game.  MyGM puts you in the role of one of the WWE’s GMs and then has you participate in a draft to secure your stable of wrestlers for your brand.  You have a set fund to spend on wrestlers, and must choose wisely between the different types of wrestlers, male or female, and heel or babyface.  Once you have drafted, you then set up your show each week, with who is wrestling who, which promos are going to happen, and where the match will take place.  You can also put the title on the line during your matches, and see if it changes hands.  Each match can be simulated, or played out either by you or the computer.  After your show, you will get ranked on your matches and how well they did, then you will see how you compared to your rival GM.  Triple H will give you tasks each week, and your wrestlers may have requests of their own, so your decisions will help determine how happy your wrestlers are.

The MyFACTION mode is very similar to the Ultimate Team mode that you see in EA Sports games.  This is where you put together a faction from trading cards that can be found or bought in boosters or decks from the store.  While I was given a few to open, I didn’t spend much time here as it is pretty much either a time sink or a place to spend your real cash to speed things up.

The actual game play of WWE 2K22 felt very good and responsive.  The moves are pretty straight forward to perform and I felt pretty much like a bad ass performing in the ring.  Button combinations will make your wrestler punch or kick, then you have a grapple button that starts a grapple, which is followed up by either a strong attack or a weak attach to perform a move.  What I really liked about this was the combo breakers that the opponent could do.  At critical times, I could press my Y button to intercept a move, or press my weak or strong attack to match my opponent to break a combo.  This made me feel like I was never stuck in a never ending combo move set, like other wrestling games of the past. 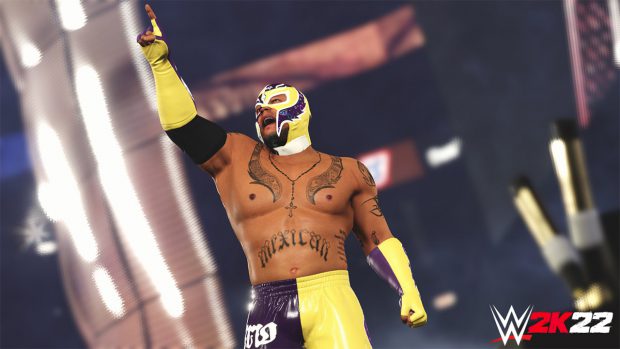 WWE 2K22 is a pretty good looking game from top to bottom.  I was able to tell most wrestlers immediately, but some models just quite don’t look like who they are supposed to represent.   The great thing is that each wrestler that has a speaking line is actually voiced by that wrestler.  Sasha Banks, Alexa Bliss, Samoa Joe, Shawn Michaels, Road Dogg Jesse James and many others are voicing themselves in WWE 2K22.  The downside is that it isn’t everyone, so you pretty much get mute matches if you are not playing MyRise.  I still cannot believe they censored Road Dogg’s entrance speech…..

WWE 2K22 is a very solid game, with some great aspects but some issues that keep it from being a great game.  I loved the MyRise story and create a character, but felt that the story should have gone in a more realistic direction.  I can see why WWE would choose to tone it they way they did, since they are aiming for a more PG experience on tv, so you get that same experience here.  I really enjoyed the options for the matches and the massive amount of wrestlers we can choose from.  There are over 150 wrestlers to choose from, and you can even download more from the custom community.  I was able to add Danhausen and Malaki Black to my roster, which already included Alexa Bliss, Scott Hall, Randy Orton, and about 3 versions of the Undertaker.

The downside here was it took me almost 2 hours to set up the game just to play it without framerate issues or controller issues on my PC.  The framerate issues where fairly easy to fix once I figured out that WWE 2K22 is preset at a specific resolution, and I needed to reset it to match my graphics settings.  The controller was a whole other issue…

Overall, if you are looking for a good wrestling game, you cannot go wrong with WWE 2K22, though I would suggest checking it out on the Xbox Series X or PS5 before the PC.   You may have less community offerings on console, but it could save you some time in troubleshooting the game.  WWE 2K22 is available now on Steam. 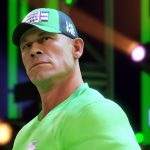