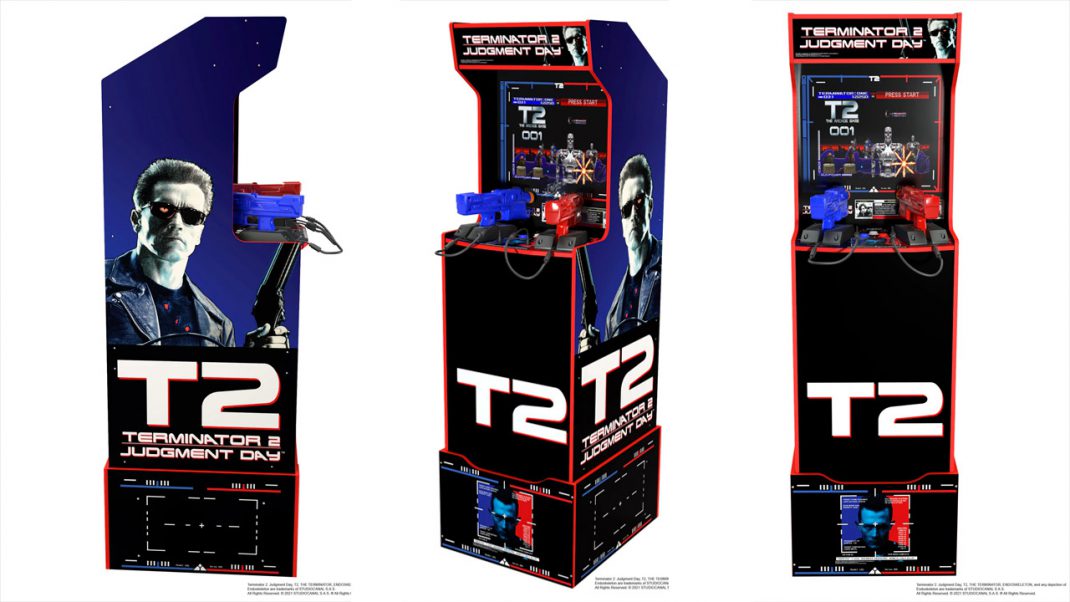 At-home arcade and pinball machines have been all the rage in recent years. Unfortunately, we all don’t have thousands of dollars lying around to buy full-size cabinets – especially full-size classic arcade cabinets. Because of this, several custom-made home arcade machine makers have come to answer the call. Some make generic cabinets that run several video game ROMs while other make replicas of specific machines – often with the original artwork and lighting. Arcade1UP is one of the latter companies. They have been making slightly scaled-down versions of classic arcade cabinets for years now. Most recently, they have released the Terminator 2 and The Simpsons games.

Arcade1UP has included their own startup menu that is responsible for running the game and a whole lot more. On this startup menu, you can access three different areas: The first is the actual game while the second is a specially-made FMV documentary about the making of the Terminator 2 arcade game. The third option is the settings screen, but more on that later. In fact, more on all those menu options later as I am getting way ahead of myself. The first thing you must do when receiving your Arcade1UP Terminator 2 arcade machine is build the thing! 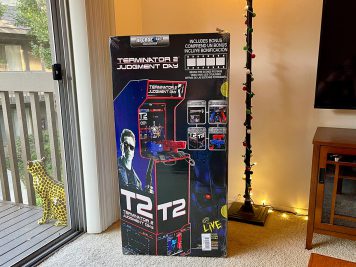 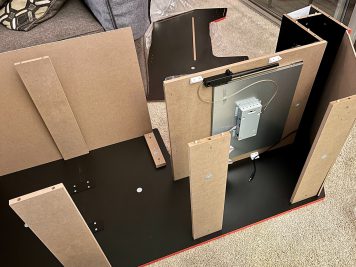 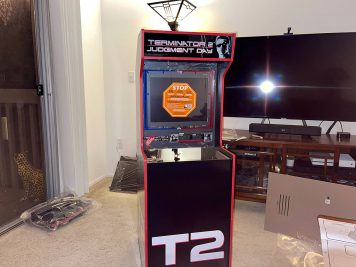 The Arcade1UP cabinet arrives in pieces, with IKEA style assembly instructions, in a 103-pound box! Thankfully, it was not an overly complicated build – just set aside a few hours so you don’t have to rush. The big trick with constructing the cabinet is to take your time. The cabinet has to support a glass display, control boards, speakers, lighting, etc. So make sure you tighten everything down prior to closing it all in and finishing it up. Also, know that it does not come with any tools, so you’ll have to supply your own Phillips screwdriver. Actually, your wrists will thank you if you use an electric screwdriver – there are quite a number of screws to turn. There are no other tools required, which is nice! Something I noticed while building the cabinet was that the instructions are a bit on the small side. I have fairly good vision and it was difficult to make out all the small print. Once you construct the Arcade1UP Terminator 2 arcade game, you’ll notice that it seems a bit short (actually, it’s a great height for children and young people). You’ll have to also build the included riser box to bring the cabinet up to normal adult height. It’s also a beautiful cabinet – featuring all of the original art that was on the 1991 arcade cabinet.

There are two toggle switches on the main control deck – a power on/off switch and a volume switch. These switches are a bit squishy, but that’s no detriment to the system, it’s just the way they are. Once you plug the Arcade1UP cabinet into a standard 110V power outlet, you’re ready to power it up. To power on the arcade machine, you simply have to short press the power for a moment. Then, the Terminator 2 marquee will light up and the boot up process will occur. 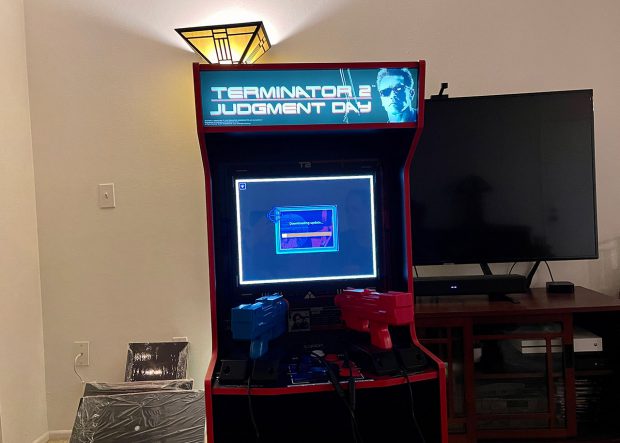 While the Arcade1UP Terminator 2 arcade game is a bit smaller than its original counterpart, it is plenty big enough for two adults to play at the same time and not feel cramped. The screen is crisp and brightly-lit, the sound is plenty loud, and the two guns feel great for the Terminator 2 game. There is even a switch on each gun to turn on and off its force feedback function – although, the force feedback was always such a cool part of the game how could you disable this in good conscience? The one thing that doesn’t seem quite right about the gun design is its cable management. The guns, when not in use, are holstered into the control deck with these plastic docking points. However, the cords are just folded around and hang out of the holster, dangling for any passerby cat to see and play with. I am not sure why the cords are not internal to the cabinet and pull out along with the guns when they are upholstered. In researching fixes, apparently this is a pretty well-known issue among the home arcade crowd and you will find more than a few YouTube videos detailing solutions that you can do yourself without too much trouble.

Originally launch in 1991, The Terminator 2 arcade game was one of my go-to games at Castle Park when growing up in sunny Riverside, CA. My friend and I spent countless quarters in both that machine and Aerosmith’s Revolution X games. Remember, “Music… is a weapon!”. Well, I never forgot that, digitized Steven Tyler! Thankfully, the Arcade1UP version of Terminator 2 is outstanding and just as good as I remembered from all those years ago. The basic premise of the game is that you’re a Terminator unit reprogrammed to help the human resistance in fighting Skynet. You’ll interact with the game by fielding a nifty, fully-automatic machine pistol (it was more of a rifle in the full-size arcade cabinet). On the side of the gun, you’ll find the special weapons button, and on the rear left side you’ll find the force feedback switch.

The gun tracking seems slightly slower than the original arcade game’s was, but it’s not slow enough to prevent enjoying the game or anything like that. I have been blasting away at Terminators and HKs for several days now, having a great time doing so. Even those people who never played the original game have sang nothing but praises about the game. Also, the FMV making-of video is a special treat as a fan of the original game and at-home arcades in general. It goes into its creation and many other aspects of the game which I was not aware of.

The setup menu will allow you to customize your Terminator 2 experience, from the overall difficulty of the game to starting amounts of energy, bombs, etc. It will even allow you to select a later level to start at instead of always starting at level 1. Arcade1UP has put quite a bit of options in the menu and it is greatly appreciated. After all, you’re not limited to how many quarters you have in your pockets this time. If unlimited lives is not your thing, you can set it to be a more challenging experience to compensate. 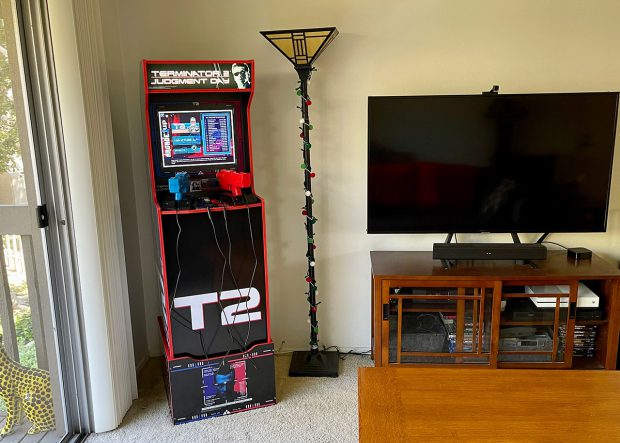 I Am the Future

There is a button on the control deck labeled “Live!”. This button allows you to bring up the online leaderboard and network options for the cabinet. That’s right, the Arcade1UP Terminator 2 game is wireless network capable! I highly suggest you connect it to your Wi-Fi before getting too far into the game. The review arcade cabinet downloaded a pretty big update when I first went online with it.

Now, for the bad news. The Terminator 2 arcade game from Arcade1UP costs $699.99 in US Dollars. This is a pretty pricey piece of gaming tech – no doubt. However, when you consider that a used, full-size Terminator 2 arcade cabinet goes for well over $2000 and will probably need a good bit of maintenance over time, $699.99 is a reasonable price for what you’re getting. This is the perfect piece of cool for your home game room or office or, in my case, living room! It has spurred me on to looking at the other Arcade1UP cabinets. They offer a whole host of different games – from TRON to Star Wars (although it looks like that one is long since on back order). The Arcade1Up Terminator 2 arcade cabinet earns out Seal of Excellence for outstanding contributions to gamer-kind! 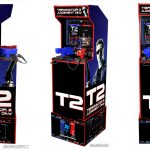