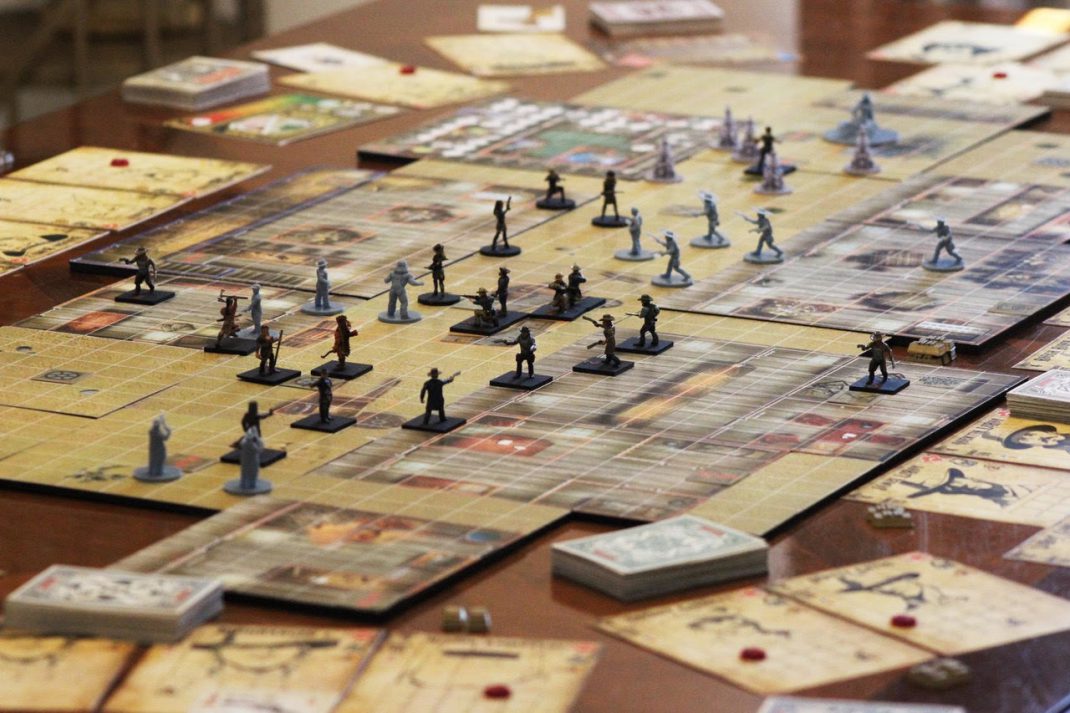 NEW YORK, May 5, 2020 — High Noon Game Inc., the innovative board game company announced today the release of its highly anticipated High Noon game that features a miniature combat tactical board game set in a fictional Wild West world. The fast-paced, well-crafted board game immerses players into the untamed wild world of “New America” challenging them to hone their skill and outwit their opponents in a high stakes shootout. The High Noon game is now available via Kickstarter with the goal of raising $84,400 over the next 30 days.

High Noon is a stimulating journey into an alternate dimension with charismatic and diverse characters that become familiar faces in a high stakes game of intrigue, vengeance, and redemption. In a Western Epic with unfinished railroads, red rock deserts, native aboriginal warbands and gunslinging bandits. High Noon creates a fun, competitive and selectively cooperative experience for players to eliminate opponents on the board to be the “Last Posse Standing” or collect the most gold within 12 rounds of intense action. While no dice are required, High Noon players draw cards to entice their actions. The game has captured a broad appeal by being relatively easy to learn yet allowing the element of strategy to obtain a winning edge.

“We are on a mission to engage people by bringing the thrilling world of the wild west to their tabletops,” said Dwight Cenac II, Creator of High Noon. “The unique aspect in regard to High Noon is the fact that it was developed by our team with the help of fans from all over the world. It’s our goal with our Kickstarter campaign to build a community, test some features of the game and get feedback from our fan base. By humanizing our production process, we’re increasing our chances for success because fans will be getting the board game experience they asked for.”

Unlike other board games, High Noon is ever-expanding. The board consists of beautifully designed tiles that represent buildings, roads and various terrain which can be arranged in any formation, ensuring no two games are ever alike. Throughout the game, players control groups of characters known as “posses” using multiple decks of cards. Each deck is unique to each team, giving them special abilities to use while attacking their opponents. To entice further actions, every battlefield is filled with crates of randomized loot that players can equip and customize their characters with. Additionally, new poses are introduced throughout the story arch of the High Noon Universe, each with their own unique abilities and playstyles. Players can collect them all or choose their favorites, providing for a unique and versatile play experience with no wrong way to pick your posse and dominate the board.

“This is just the beginning for High Noon and our wild west adventure,” said Cenac. “Our audience is already eager for more. We are beyond excited to bring these characters to life as beloved icons in the High Noon world. With the release of our new game, it’s our mission to revitalize game night and bring continuous excitement for our players for years to come.”

High Noon can be played with two to four players at a time and is for ages nine and up. With the campaign launching today, backers are encouraged to support the campaign now on Kickstarter. As a special offer, the team behind High Noon will be hosting a 24 hour live stream launch party, where prizes and awards will be given at noon in every respective time zone or in proper Wild West terms, High Noon. High Noon is also offering multiple Pledge options including the Buckaroo Pledge for pledges of $79 or more which includes the core game and everything you need to play in the world of High Noon. The Saddle Up Pledge will also be available for pledges of $137 or more and features the core game and shootout at Pascagoula Ridge expansion pack. Or backers who participate in the All In Pledge of $179 or more will receive the core game, a shootout at Pascagoula Ridge expansion pack and an additional Abernathy Gang.

High Noon is available now via Kickstarter, with the goal of raising $84,400 over the next 30 days. For additional information, follow us on Facebook and use the #pickyourposse and #highnoongame.