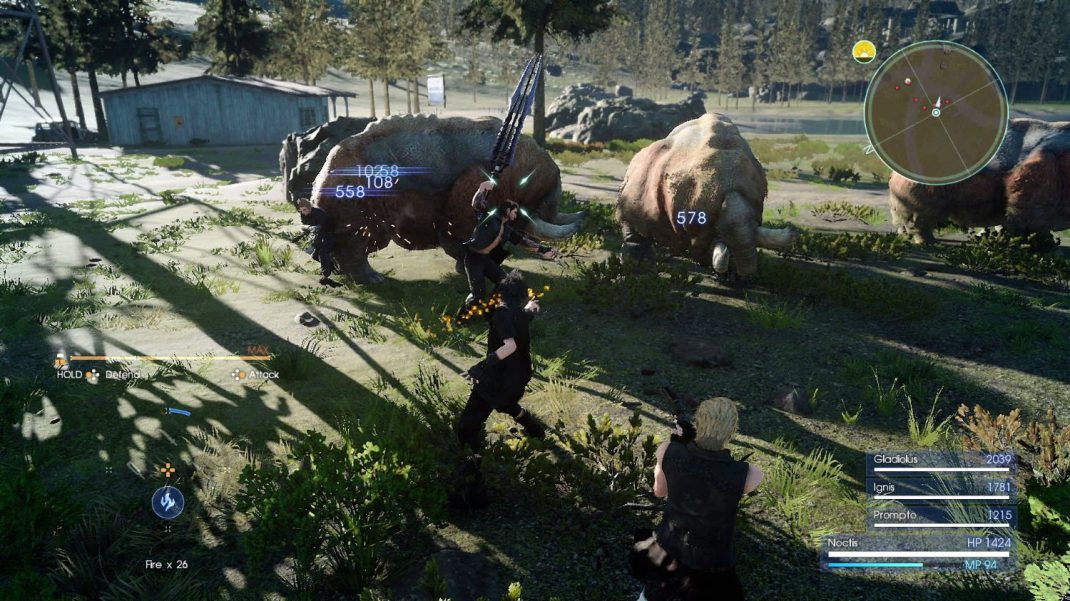 I, like many gamers who are a bit older, played all the Final Fantasy games and one-off titles like Final Fantasy Tactics when they came out. When the opening title for Final Fantasy XV comes up and it says “For Fans and First-Timers”, that is a rather bold statement because the groups generally want two different styles of gameplay.  The veterans want a challenge that the years of game progression have provided and the first-timers want to be able to just jump in and play without some massive learning curve.  So how could Final Fantasy XV cater to both? It’s time to find out!

First off, if you are a first-timer to the Final Fantasy, know that the setting of the franchise has become an interesting hybrid of medieval fantasy and modern technology.  For instance, your character might drive a sporty Regalia automobile then climb out and fight a demon using electric swords, daggers, fireballs and finish them off with a couple gunshots.  Then you will make camp and one of your party who has cooking as a skill will make some kind of gastro-creation that might be something like a stuffed bell pepper with a side of potatoes melody to increase strength and health until the next time you camp.  During that time you will look at the pictures you saved to your digital camera from the day and decide which you want to keep and of those any you might want to save on your real life social media to share.

That is just how you get started with the game too, the combat design is flexible, with options both for real-time and turn-based fighting.  In the older games, you might have four characters lined up on the bottom of a screen and a few monsters on the top.  You would decide the attacks and then hit the button to proceed.  In this case, you can figure out which move you will do with your characters against monsters all around on the screen then decide where they will go after that attack.  It takes a bit of getting used to but is a fun type of fighting design, though if you want you can just play like other 3D open world games and just run around selecting your attacks and getting things killed.

As I mentioned it is a 3D open world and it is seeded with tons of side quests and repeatable missions/bounties. You can pick up a bounty, run out and earn your gils (currency) then camp, head back and ask the designated quest/information guy about what next can be fought and where items of interest such as energy sources for spells, food spots for recipes and treasure chests to get new gear and weapons.  Don’t expect the new gear or new weapons to be too exciting at the start, a bronze amulet for example, but if you get some decent food buffs on you and you get an okay weapon upgrade you can start doing some decent damage quick.  As long as you stick to the daytime.  You have to grind pretty hard to be able to fight the demons that come out at night and with all this I am still mostly talking about the starting section. 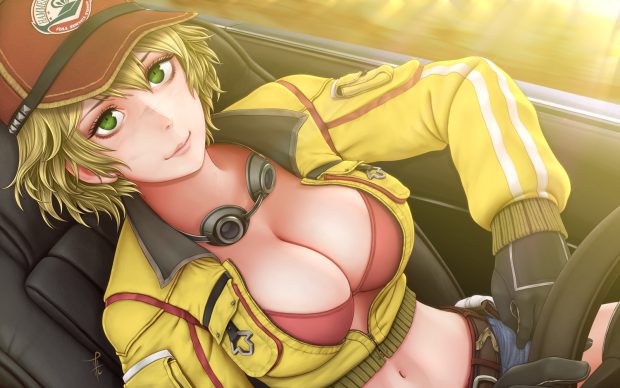 You start with your bros who are going to be your cabinet when you become King, for now you are a prince in an arranged marriage.  I used that as my excuse for why I was grinding out in the wastelands, it’s like a last road trip with my buddies before getting married.  With that being said it isn’t going all “What Happens In The Wastelands Stays In The Wastelands” because Prince Noctis doesn’t even have eyes for the half dressed mechanic who you want to make tons of nonpolitical correct jokes in real life.

He is all about what next bit of fun and mischief he and his best friends can get into.  That is something that stands out really heavy in the latest game, it is a total bromance story and feels fine with it.  You make jokes with each other as you run around, you cheer each other on during combat, you actually reach down and help a teammate up when they have fallen.  When I was beat to crap and on the ground trying to recover one of my friends would shout to another to cover me and he would stand in front of me long enough to get some health and magic energy back. 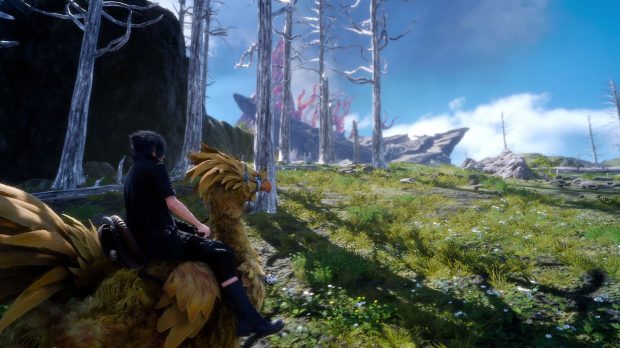 Once you take a certain amount of damage the only way to fully recover it is to give it a night camping or potions to juice back up but remember juicing in the the game is scarce so you might want to save them for boss fights.  When fighting you can do special combos like the strongest Gladiolus Amicitia might hold out his weapon and you can jump off it and sink a blade deep from above.  You can also switch between characters and have your buddy Prompto to take some specialty shots at the birds your blade swinging friends have a hard time hitting so you don’t have to hope the AI will think of it.

The AI seems to work really well though making sure your friends are doing their part in the battles when you stumble upon enemies which can spawn up pretty much wherever.  I’ve had bounties to go fight some creature and have some other harder creature pop in my way before getting to them and taken them out before the smaller bounty.  Sometimes you are lucky enough to stumble upon foods, magic elements, minerals or treasures on your own while exploring and the nice thing about the open land is once you get a campsite saved or area uncovered you can usually get back there through auto drive or auto camp.

For reasons I won’t say here this road trip hits some pretty heavy potholes when it reaches its destination and the story comes into heavier play though the game still keeps battle in there to keep things from getting too stagnate.  The story line… well that might be kind of the weakness of the story with at times leaving you scratching your head and saying why am I doing things this way or why wouldn’t I rest up and camp here and the answer is simple, it wasn’t in the script. 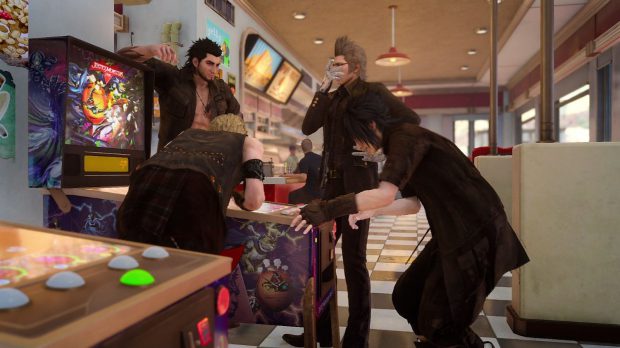 There are also mini games to be found in the game which I got just as addicted playing as I did the main game at a couple times because they didn’t skimp on quality making them either.

I would be remiss if I didn’t mention how amazingly gorgeous everything looks in the game and how clear and beautiful the sound is.  Running around on a Chocobo along cliff sides or walking bazaars and taking in the great giant  majesty of towered towns just…well makes the game a pleasure for fans and first-timers.

If you need more incentive at the time of print for this article it was coming up on the Final Fantasy festive season on December 22, 2016 where all players who own the core game get a New Game+ mode, players who complete the game can start again with gameplay data intact. A new photo frame feature will also be available for photos taken by Prompto. 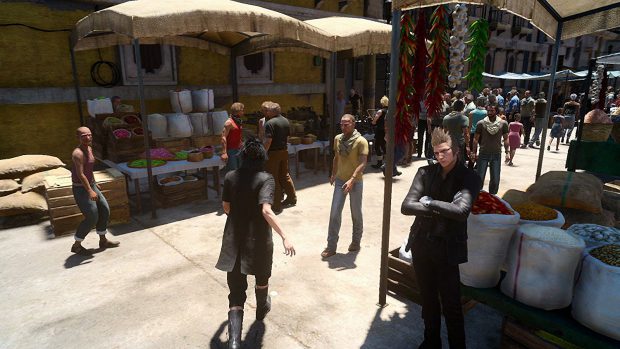 The Holiday Pack also has the Warrior’s Fanfare, sheet music that provides additional AP when players earn an A+ in offense outside of training, and a Nixperience Band that stops party members earning experience to make things harder.

The pack also gives you an entry to the Moogle Chocobo Carnival in late January 2017, and a Choco-Mog t-shirt to celebrate that event.

Players who own the Season Pass will get all that plus The Tech Turbocharger and Armiger Accelerator for supercharging your tech bar and the Armiger bar, each operating at the cost of freezing the other. Blitzer’s Fanfare provides AP when players earn an A+ grade in Time and Tactician’s Fanfare for Finesse (Finesse is not my strongest feature usually).

Other items included are The Key of Prosperity that increases the rate at which fallen enemies drop useful items and the Stamina Badge that lets Noctis sprint and hang without using up stamina. Season pass holders receive a Festive Ensemble outfit and a set of exclusive photo frames in January of 2017 as well. 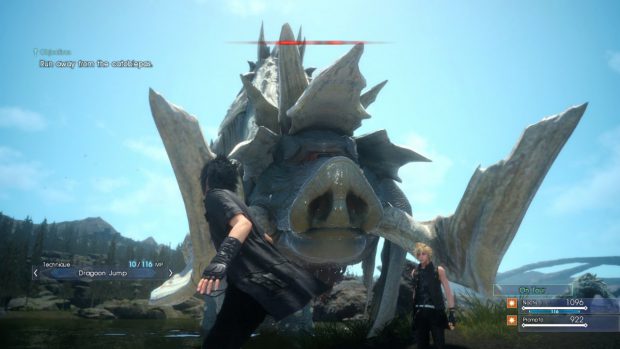 Final Fantasy XV is a game where the more you put into it the more you get out of it, take your time, play is through slowly, then play it through again and enjoy a nicely done addition to the Final Fantasy franchise.  If you find a problem while playing it don’t worry about it too bad, just report it, the staff behind Final Fantasy XV have been listening to players’ concerns and making adjustments and updates because they truly want to stand behind there statement of a game “For Fans And First-Timers.”