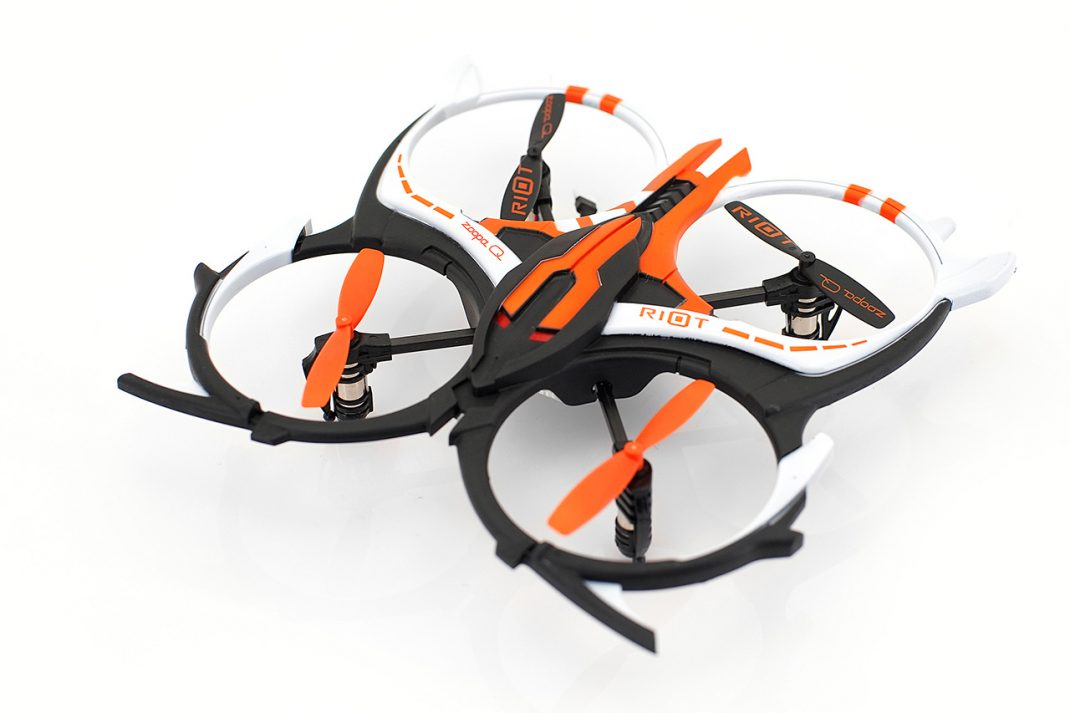 I got my first drone quite a while back before they were really on the commercial market and I could not have been more excited. I had impatiently waited its arrival and as soon as it arrived I tore it from the box and powered it up.  That is when I discovered that, unless you had something built into a drone to keep it self-balancing, I would spend months just trying to get it to hover a couple feet off the ground without just flipping upside down.  After that, I would see dozens of drones, all out of my price range and because apparently even keeping a desktop exec toy one from flip flopping was pricey.

We are now entering the days where drones get whole sections of trade shows and they go from the sizes smaller than a beer coaster to ones that can accommodate take passengers.  So for the first time since all those years ago I am trying out a new drone in the form of the Snakebyte zoopa Q 165 Riot. 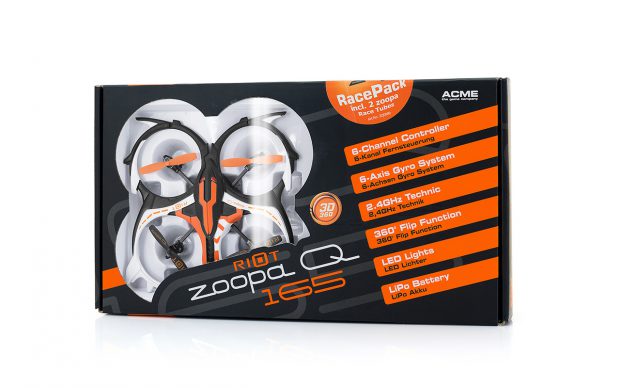 The zoopa Q 165 Riot is about the size of a mouse pad and uses 2.4Ghz technology to facilitate communications between itself and the remote control.  The controller is larger and designed to remind you of an old school RC controller but it only uses a small part of the space, most is for comfort.  It has two sticks – one for up and down and the other for directional input. There is a speed button so you can use it at a lower speed indoors and not break anything too much or if you are outdoors in a clear area you can open it wide up and maybe even race a friend who has it.  Then there is the coveted 360 Flip Button.

Out of a lot of drones it really is this particular button that makes all the difference.  If you have a quality drone it should do everything in it’s power to keep you from flipping it over because that is an instant dirt nap for the machine.  But they have built into this one so that all you have to do is be going forward, hit the button and it will do the magic flip that will impress your friends, start conversations with strange women without having a dog or baby (and the poo that comes with them) and be an overall talking matter.  Just don’t hit the said people with the drone, then the conversation will be less fun…

In the manual, it says to give the drone a starting room of about 3×3 feet for fun flying.  Personally I found a much wider area such a park  with minimal trees and dogs around to be a better choice when getting started and learning the controls.  Blades can get damaged or broken upon impacts (which is why it comes with four spare ones that are easily changed out), but softer landing zones will decrease the chance of this happening.  The first thing we want to do is fire them up and try to fly them over the family pet, not only cruel it can damage both.  Outdoors for starts, indoors when mastered.

Don’t get bummed if it takes you a while to learn to fly it, whenever you see someone flying it on TV or convention, know that they have had tons of practice. They didn’t just unbox it and start doing aerial acrobatics.  The zoopa Q 165 Riot has a nice battery life, especially for a starter model, and my suggestion would be to bring a backup battery that has a USB port then you can use the USB charger kit that comes with the system and juice it back up in the field.  The zoopa Q 165 Riot can stay aloft for around 8 minutes. The remote control runs off 6 batteries so it should last you for quite sometime. Acme.com and Snakebyte seem to have thought of most things you would need to get airborne and make repairs to stay airborne.  The blades even have protective plastic rings to try to maintain their longevity.

One of my crash landings did result in a repair that required a piece that was not duplicated in the box so I contacted their service people and I have a fresh part so fast it was almost as though it had never broken.  Getting a company to stand behind a product can sometimes be a battle but they did so terrifically.

The Snakebyte zoopa Q 165 Riot is a terrific entry level drone with some features you might hope to see on pricier models. The battery life is good, the flight system has a fairly straightforward learning curve, and you get a big boost in fun thanks to the 360 Flip feature.  If you aren’t an expert flier, this is a great drone to go with. If you are an expert, I have heard that removing the chassis can… never mind I have said too much!