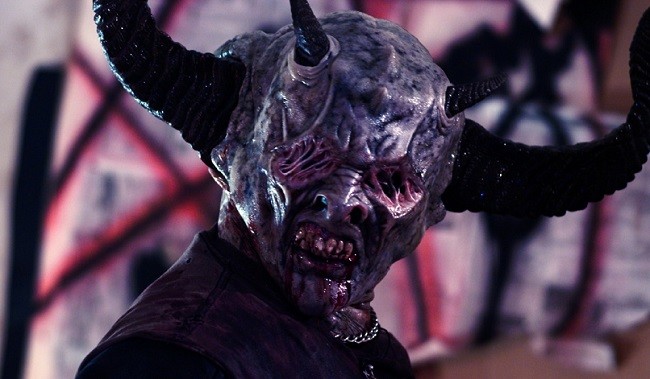 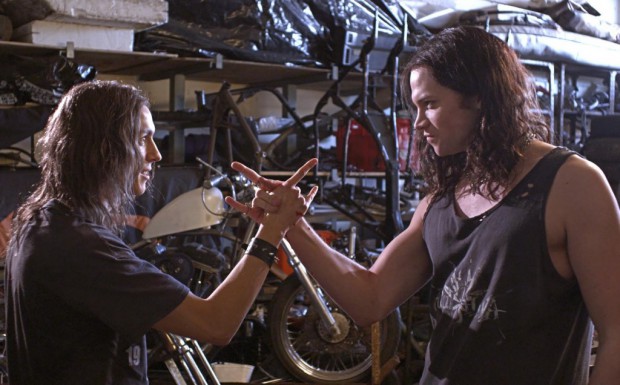 One thing I learned from movies over the years is that music can unite the world. This, of course, was courtesy of Bill and Ted’s Excellent Adventure. I learned from the Evil Dead saga and Cabin In The Woods that if you don’t understand what the strange words mean, whatever you do, do not read them aloud. From the movie Deathgasm I learned that music can tear the world apart, especially if it is based off words you shouldn’t be reading out loud with a heavy metal riff.

Premise:
Two teenage boys unwittingly summon an ancient evil entity known as The Blind One by delving into black magic while trying to escape their mundane lives.

Review:
That premise is basically the whole movie in a nutshell without any spoilers – thankfully. I type thankfully because, let’s face it, it is hard to review a movie without giving away spoilers. The movie is about two teenage boys who are bored in their own separate lives and bond over heavy metal records. Brodie (Power Rangers RPM’s Milo Cawthorne) by is considered a loser who hangs out with guys who play D&D during lunch and try to make music videos in KISS style makeup. Zakk (played by newcomer James Blake) is a lone wolf that everyone is afraid might be a Satan-worshiping psycho. When the two realize they have the same taste in metal it is time to start a band. 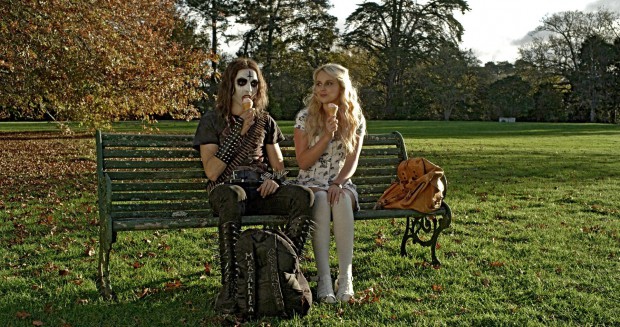 Without giving too much away, they wind up singing the wrong thing and all hell breaks loose, literally, in the form of a figure called the Blind One. There is much, much more to the movie than this, mixing in some solid camp-factor reminiscent of Dead Alive (aka Brain Dead), directing that at times seems homage to Evil Dead, and a love story that is just enough there to be entertaining without becoming annoying and taking away from the overall plot.

While on the subject of the film’s love story, we have to give special mention to the character of Medina (Kimberley Crossman of Power Rangers Samurai), the school princess turned ass kicking metal head who threatens to steal the movie from the guys on more than one occasion. We absolutely loved her character and think her moments of show-stealing were terrific. It’s always good to see a female character in a horror movie that stands and fights instead of screams in flight. The helpless characters are reserved for the side stories and comic and gore relief, the main cast all have a bad ass streak even if it is hidden a bit far down inside. 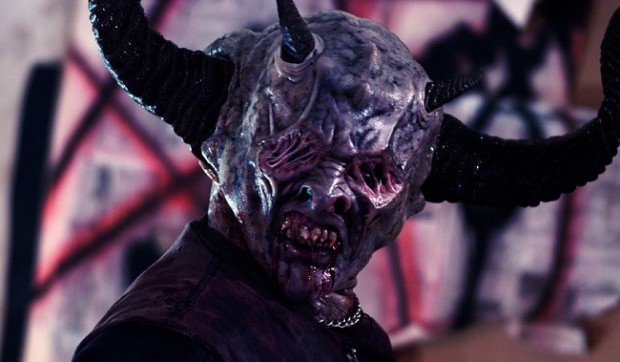 What’s even more impressive is that Deathgasm is writer/director Jason Lei Howden’s first feature film in these capacities! Before this project, he worked at WETA for six year’s as a VFX compositor. Howden shows a masterful handling of balancing the various aspects of this film where any misstep would have thrown the entire thing out of whack. As it stands now, Deathgasm looks like the film of a tenured director. The film is a campy concert of metal and gore that shows you can never judge a person’s “metal” by their cover.

Deathgasm will be available on October 2, 2015 on VoD from Dark Sky Films.