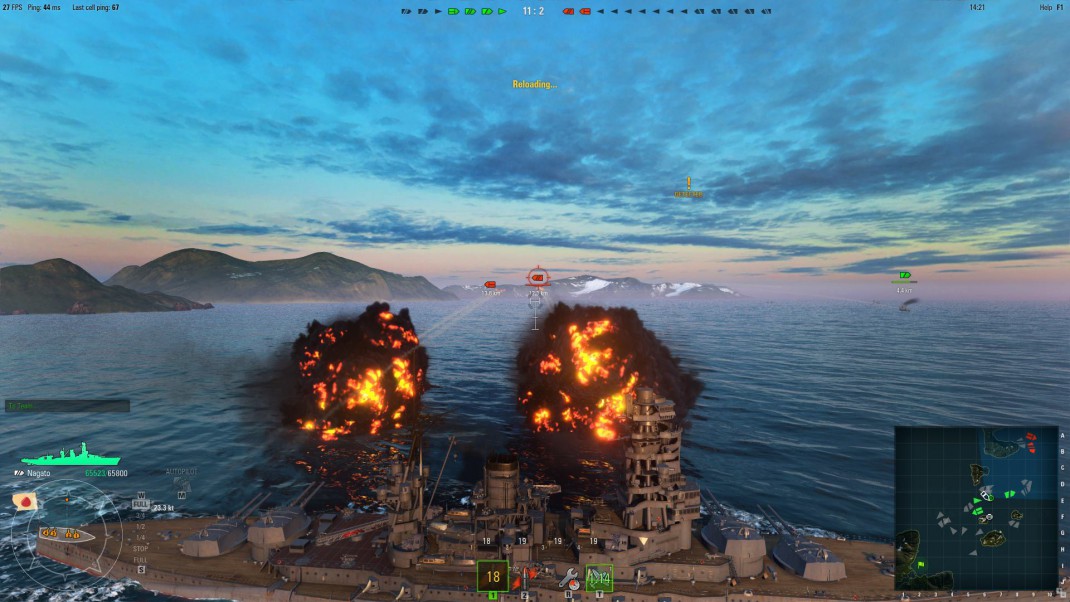 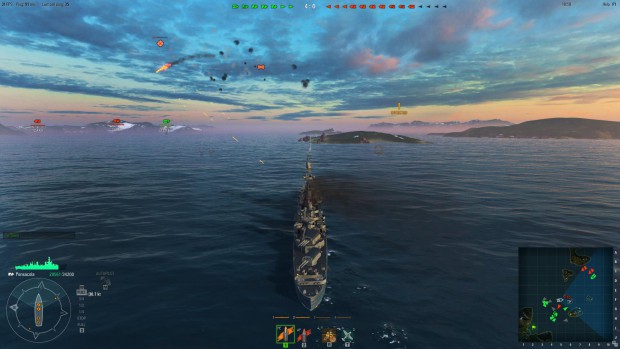 The free-to-play ecosystem I have been most impressed with is the one created by Wargaming.net. They move their flagship game World of Tanks onto different platforms with continuous success, in no small part due to the fact that you can truly have a good free-to-play experience without having to spend money. If you do decide to spend money on the game, you can get outstanding tanks that feel worth the money but don’t grant too unfair of an advantage. I personally got to play the “Ripper” tank for the first time recently and fell in love with it. As this review is going to print they are even expanding WoT to the PlayStation 4 increasing the way players can enjoy it by one more platform. Their second game, World of Warplanes is a little more difficult to master and so has been a bit slower at growing as a result but I expect it to soon be available in more locations, maybe simplified a bit. It may however wind up being surpassed quickly by World of Warships which has just recently hit the market but is already showing a popularity comparable to World of Tanks.

Hands On:
Two reasons I think World of Tanks has done so much better than World of Warplanes is due to its simple horizontal playing field and a variety of choices in play style available to players. In World of Tanks, players drive around and shoot at each other, they don’t have to worry about tanks coming out of the sun or crashing into a cliff and exploding. They have to worry about driving in and out of cover and shooting the other guy. No worries of their engine stalling out in a climb, no concerns on whether or not they are going to go into the deck while trying to loop behind an enemy. World of Warships is very similar to World of Tanks with regards to cover and shooting. You can jump in and as long as you don’t go crazy torpedoing your own team you can fight as you get used to the controls which are similar to World of Tanks.

In World Of Tanks you have the option of playing artillery which gives you an entirely different view of the playing field as you look down on the map and try to adjust fire to hit your enemies. This is nice if you want to mix it up from the standard play style from the game and almost gives more of a strategy game feel to battle. In World Of Warships the same idea applies when you play the carrier, you decide where to move your ship and set autopilot then you launch your planes and decide where to send scouts, fighters and bombers to be most effective, when to send them back to the ship and when to move your ship. Just like World Of Tanks artillery you can find yourself in face to face combat but only if things have gone particularly wrong. Otherwise it is entirely from the map down view.

Of course, if it were identical to World of Tanks there would be no reason for World of Warships to exist, so it is in the differences that this game can be most interesting. Players used to WoT will start their vehicle at full speed, stop exactly where they want then go back and forth behind cover. In World of Warships the ships move like real ships, they take time to stop, they are more sluggish in changing directions and if you aren’t playing attention and you are going full speed at some cliffs it’s going to hurt your ship and take some time to recover. Each type of ship also has aspects they make its play style different from the other ships classes, far more dramatically than in World of Tanks. In WoT a light tank is fast but less armored, medium is a mix between the two and heavy is slow with heavy armor. As mentioned before, artillery has a completely different play style. 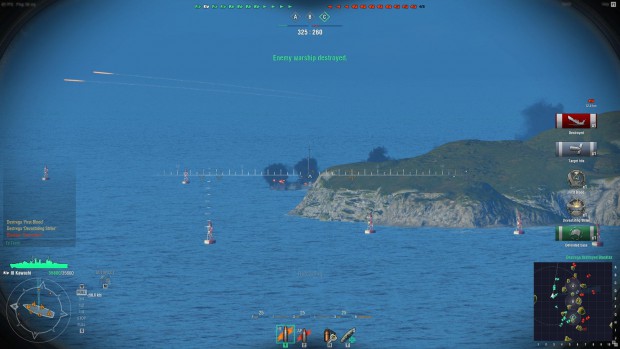 In World of Warships the lightest ship is much like the light tank, more agile, less armor but that is where the similarities end. Once you get past the starter ships, the lightly armored Destroyer class has smoke screens to obscure visibility, the ability to boost engine speed, and torpedoes which are extremely powerful but fire and forget. This means that friendly fire becomes a huge concern. I honestly have been sunk more often by teammate torpedoes than enemy ones simply because you want to make sure none of your allies are anywhere near the direction you decide to send “fish in the water”. Torpedoes are the great equalizer of the game, like putting a huge rocket on a light tank but they cross the map so if you miss your enemy they keep going past it until they hit something. Like your teammate maybe.

Next comes the Cruiser class, probably the most versatile of the classes it can have anti-aircraft guns like the Battleship, torpedoes like the Destroyers, and even an aircraft launcher like the Carrier. It lives up to its name though as it cruises right along, not very fast, not very armored. A good Cruiser with a good player behind it can truly be a game changer but in unexperienced hands it can be a quickly sunk ship or in worse case a teammate torpedo hazard. With practice they can work in great tandem with the Destroyer and Battleship, especially if there are no Carriers in the fight. 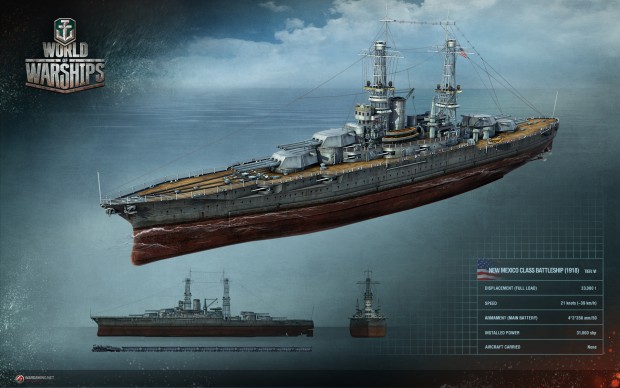 The Battleship class is a popular one, especially with players of sea battle games. They are a great deal like an old war galleon in the sense that they make a smaller target from straight on but they can do a broadside volley that can sink a smaller class ship in one shot. Much like those old time ships they are heavily armored but broadside shots to them can do massive damage, a couple of torpedoes can end it’s run. The Battleship is handy to have in a fight against a carrier since they tend to have a lot of AA guns and the larger the target the more cannons they can bring to bear on it but like the Carrier Class it doesn’t maneuver great or go very fast. One of it’s strongest points is that battleships can repair a little a few times during battle and anyone who has had a spare repair left to use in World Of Tanks when the hit points get low knows how that can be a match winner.

That leaves the Carrier which I touched on a bit before in the sense that it is a different map view style and a much more strategy feel to the game. You move your ship and planes around the map trying to keep your ship from being approached or detected while using your fighters to protect your bombers and destroy their bombers and using your bombers to try to sink the enemy’s ships. With a little bit of practice and map awareness a Carrier can effectively control where battles take place and where damage is most effected. For example I will send my fighters out to fly over an island in the area I think the carrier is most likely located so I can intercept any launches then I will decide which ships in which locations are best torpedo targets so that I’m unlikely to hit my fellow teammates but most likely going to sink a ship or lower it’s hit points enough for teammates to take care of it. You only get a certain number of planes and though you can decide how many of each class you want to take I tend to leave it to standard stock and concentrate on strategy rather than throwing them at the enemy without thought. Once you are out of planes the carrier can fight back a bit but for the most part it is toast so conservation is key. 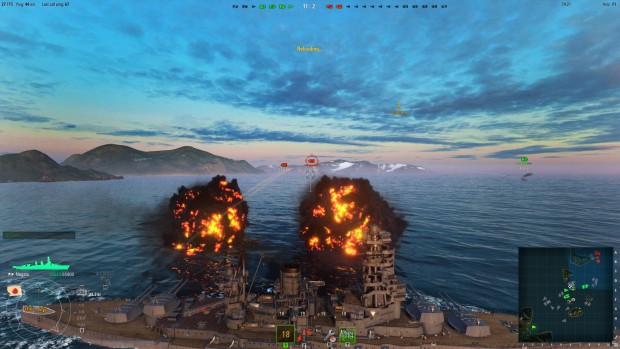 Last thing before the wrap up is that the graphics in this game are absolutely amazing. For a free-to-play battle game with large numbers of players and different ship classes and designs this game has AAA quality visuals and sounds. The ocean looks and behaves like a real ocean, from the waves to the splash downs. The ships show visual damage with fire, structural breakdown and general scarring that looks as real as you could hope for. The cliffs look real and though individual trees look a little cartoon-like the forests look lush and real.

Last Volley:
World of Warships is like World of Tanks in all the right ways while being very much its own game and feeling like an evolution of the Wargaming.net family. I expect World of Warships to be as popular if not more so than World of Tanks and I would not be surprised to see it on other platforms such as consoles in the very near future. You will probably see me playing in the Carrier a lot because I have truly fallen in love with that class but if I am in a smaller boat firing torpedoes I will do my best not to hit you with one of my fish, unless of course you are the enemy.