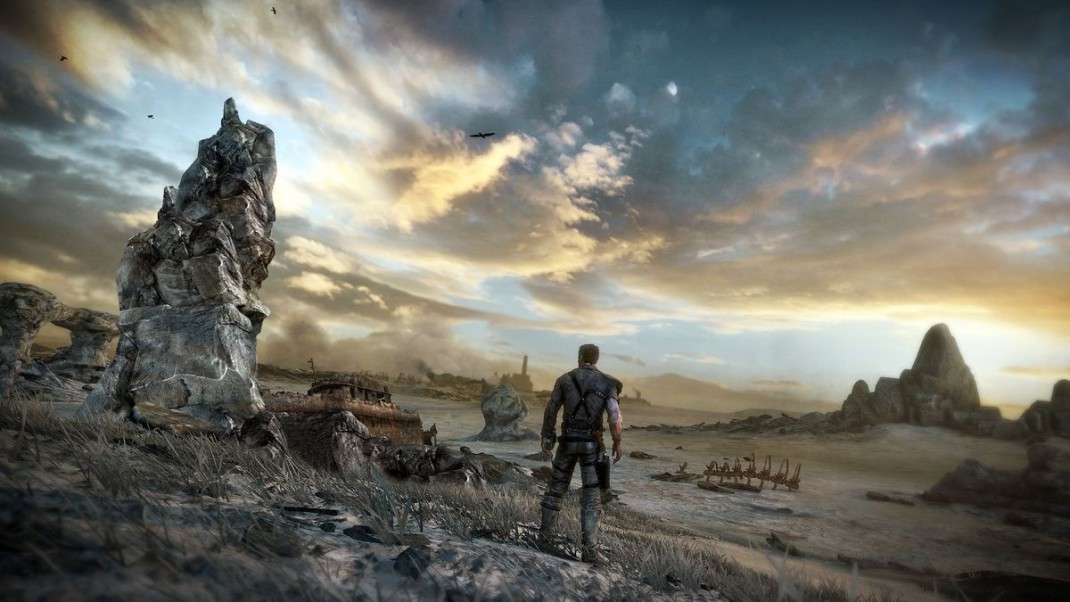 The vision dims. All that remains are memories. I remember a time of chaos, ruined dreams, this wasted land. But most of all, I remember the road warrior, the man we called Max. – Opening Narration, The Road Warrior

I’ve been a junkie for the Mad Max franchise since the first film came out, though it was the second one that really sank its rust-covered, blood-stained hooks into me. I managed to pick up an original Australian version of Mad Max on VHS (the American version had dubbed voices) back before eBay which was pretty tricky. I even wore a shirt with the Road Warrior opening narration and Max and Dog printed on it (trivia fact: the dog was really named “Dog” and was adopted by a crew member). In short I have been waiting for Mad Max: Fury Road for a very long time and I have been waiting for a good Mad Max game my whole life.

Description:
Become Mad Max, the lone warrior in a savage post-apocalyptic world where cars are the key to survival. In this action-packed, open world, third person action game, you must fight to stay alive in The Wasteland, using brutal on-ground and vehicular against vicious gangs of bandits. A reluctant hero with an instinct for survival, Max wants nothing more than to leave the madness behind and find solace in the storied “Plains of Silence.” Players are challenged with treacherous missions as they scavenge the dangerous landscape for supplies to build the ultimate combat vehicle. 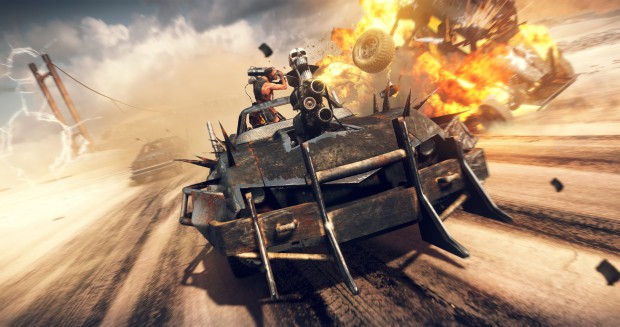 Hands On The Wheel:
First off let me say this is not the first Mad Max game, one came out on the Nintendo at the height of The Road Warrior’s popularity and it had some similar aspects to this game in the sense you were constantly searching for ammo and gas while fighting on the road and in strongholds. That being said the game was ridiculously hard, crushing many kid’s dreams of being Max and so should be resigned to a footnote save for retrogamers who have a high level for self punishment or a Game Genie (Ed. Note: I loved my Game Genie!).

The only reason I mentioned the above game is that, as a Mad Max fan, I went in a little worried about this game. There were questions on how it tied into the films as none of the films’ stars were contracted to it. Rumor had it that the melee system was boring and you didn’t get the Interceptor! In the Mad Max franchise the black on black Interceptor was basically his co-star. Add to that the fact that the first Mad Max game was a disaster and you have a pretty decent list of worries leading me to hope it at least as good as what I consider to be its spiritual counterpart: id Software’s Rage.

Pretty much all my fears were for nothing as Mad Max is a well put together, solid addition to the canon. From a third-person perspective, you run around doing jobs in the dangerous Wasteland to upgrade Max’s car, gear, and even his spiritual essence. His sidekick, a hunchback named “Chumbucket”, is a master mechanic who believes building better cars is a religious experience and that every car has a soul. His masterpieces are called “Archangels” and his calls Max “The Saint”. 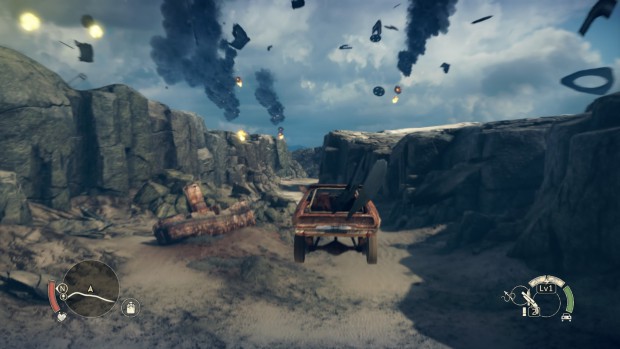 The storyline is pretty straight forward: Max is, as usual, trying to keep to himself when things go awry and he winds up doing good and helping a lot of people. His reactions to old photos of other people’s lives and his interactions with a strange spiritual guide let us in on how Max’s mind is working, maybe even more than he himself knows. The spirit guide also helps Max learn to make water and gas last longer, food be more filling, extra scrap bonuses appearing on occasion and other such survival techniques in the Wasteland.

Scrap. Scrap is the currency of the Wasteland and a constant source of scrounging. You use it to improve your car and gear, add new fighting abilities and improve your strongholds so that they have more abilities to help you when you check into them. Basically, Scrap makes the post-apocalyptic world keep moving in the Wasteland. As such, everybody wants it and it is somewhat scarce and can take a while to get enough of to do the projects you want. People who like to farm things in games will THRIVE in Mad Max while people who hate grinding will grumble and complain. Hopefully, they will still do it because the game is that much fun. There are ways to occasionally get a large jackpot of scrap that might help you fund a couple of the early projects with one find and later in the game they make getting a supply of scrap easier and picking up scrap a breeze but the projects also start requiring a lot more scrap too. It feels worth it though as your vehicle (I love the “Ripper” car, of course) becomes more powerful, your melee does more damage and the NPCs talk about what a legend you are becoming. 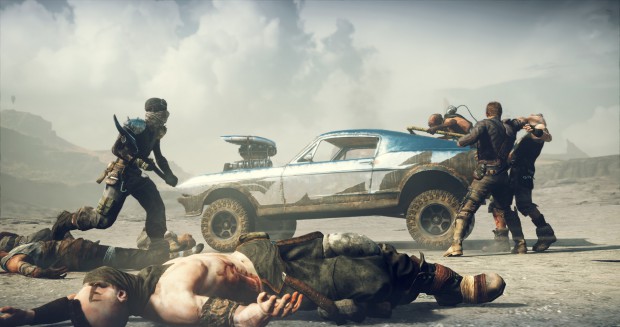 This is probably a good point to address one of the contentions of some players: the melee combat system. While your car gets newer and ever-improving gadgets to survive in the Wasteland, when it comes to fighting, it is almost always with your fists. You get a shotgun and after a while a couple of shivs to use in finishing moves but the shotgun is a bit awkward and shells are always limited. This means mostly punching with the X button with occasional parrying, rolling dodges and finishing moves. Mostly you just hit X which a lot of folks felt wasn’t very satisfying. If an enemy comes at you with a weapon you can disarm them and if there is enough of a break in the fight you can pick the weapon up and use if for a couple seconds but they break fast and at the end of a fight if it isn’t broken you can’t take it in the car with you. I found myself several times saying to the television screen “come on, like he can’t toss that club onto the seat next to him!” as he drops the weapon to enter the vehicle. I don’t mind hitting X a lot while fighting, didn’t bother me at all, but not being able to take the weapon along was frustrating and sometimes the fist fights felt a little clumsy. Also you have a sniper gun in the car but you can’t take it out of the car and carry it on foot, to me that just didn’t make sense.

Because quite often the enemy swarms you at strongholds in superior numbers and attack all at once, I found myself getting really creative with my car – more specifically, with the grappling hook. The grappling hook is one of the most fun parts of the game, I purposely have gone out of my way on occasions just to use it. Chumbucket the hunchback mechanic rides in the back of your car and fires the harpoon while you drive so if you see an enemy running at your car you can shoot them with the harpoon, retract it and watch their bodies go sailing through the sky. I got so I would circle a camp or stronghold, tear down gates with the harpoon then just keep circling shooting everyone I can with the harpoon and launching them through the air while I giggle. When the grappling hook gets upgraded it can be used to tear parts off of cars as well so I had a car that is basically a suicide bomb on wheels barreling down on my Ripper, I ripped off the front wheel and watched it slide to a stop in the dirt feet from me. When the driver got out he took the grapple hook ride to Cloud City. So much fun! You get so that you look for anything and everything to hit with that hook. You get some other great weapons but the grappling hook has unlimited use which makes it your best friend in a limited resourced land. 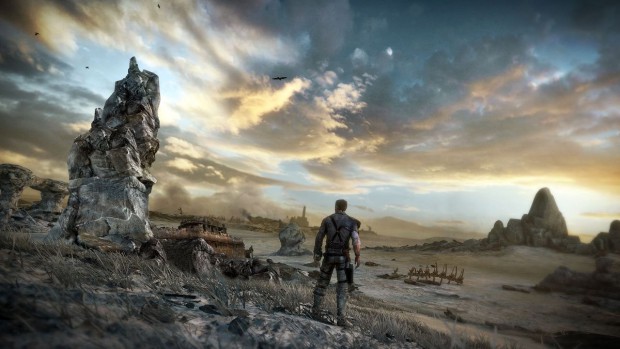 The Wasteland may be short on resources, but it is definitely a beautiful, intricate landscape with actual times of day and dangerous weather patterns. There is a distinct nautical feel to the Wasteland for a storyline reason I’ll let you discover on your own but as a result rusting hulks litter the landscape and look amazing but sunset and eerie by moonlight. Their is so much detail to everything that I found myself taking screenshots on my Xbox One just so I could show people what it looked like when they come to visit. The detail in burning wrecks, maggoty corpses and even just the storms are so beautiful. Even when you are getting battered by debris from a dust storm of struck and set ablaze by a lightning storm it is a sight to see, hopefully from the cover of shelter. Even the different tribes of the Wasteland have different looks and outfits that distinguish themselves and show attention to detail.

The overall look and feel of the game is harder to place but in a good way. This is because it is not directly associated with any one of the franchise’s movies. It seems to take a little from the looks and feel of all the movies especially in the tribes and vehicle designs. A good example would be some cars look slightly altered like the first Mad Max movie, Some are a little more raggedy like The Road Warrior then there are some loaded with spikes like in Fury Road. Max himself starts off looking like the first movie but with unlockable head features he can look like the end of Road Warrior, or even all Raggedy Man like in Mad Max: Beyond Thunderdome. He looks most like Mel Gibson and sounds a bit like him, but just different enough to be his own version.

Last Scraps:
Mad Max is a great game and a terrific addition to the canon. As a true fan I know I will do every mission, find every scrap at a camp and leave the Wasteland as deep into his character as possible. I still have a lot of road ahead but I have a full tank, a full canteen and enough scrap to see another dawn.