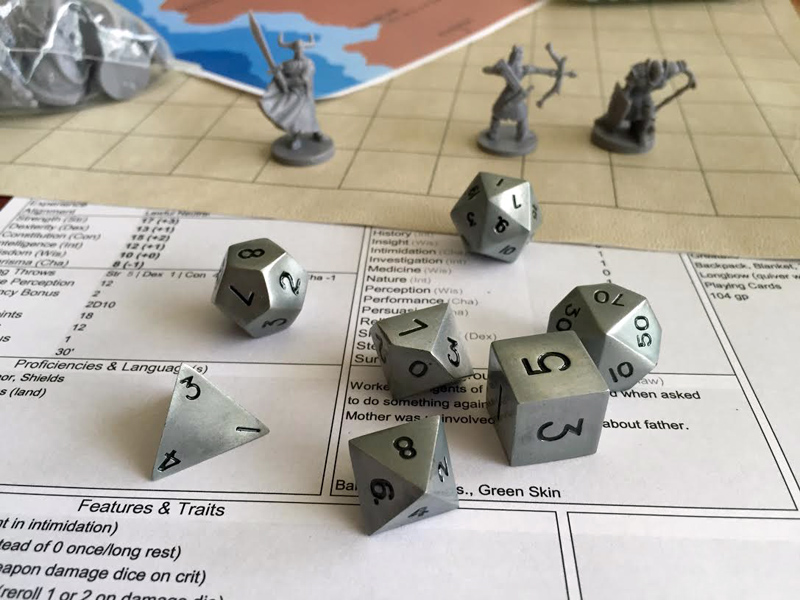 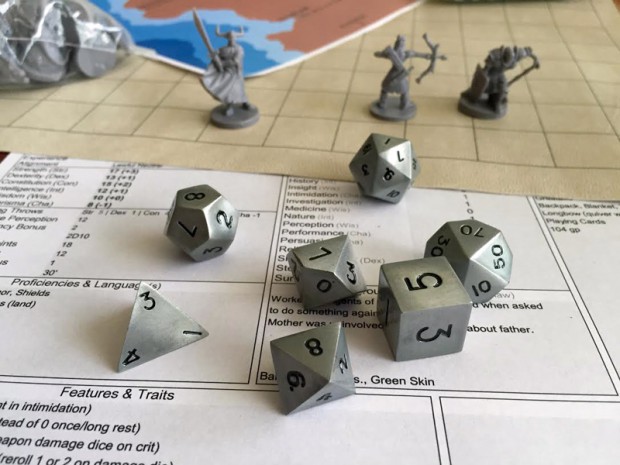 Norse Foundry makes all kinds of tabletop RPG related gear, mostly made of metal (hence the “Foundry”). They have a range of dice, coins, pins – even some velvet and satin dice bags. However, we had our eyes on their metal dice – the company’s claim to fame, and got to checkout their 7 piece “Aged Mithril” metal dice set. Our game of choice: the new Dungeons & Dragons 5th edition ruleset. The kind folks at Norse Foundry gave us a media rate on the dice and, before we knew it, they arrived on our doorstep. All that was left was to conjure up our RPG group and start slinging some metal. The Half-Orc Fighter in me roared in anticipation.

All the Norse Foundry 7 piece metal dice sets contain one D4, D6, D8, D10, D12, D20, and one percentile die. This is a good variety of dice to start with for most any RPG out there right now. You may have to roll one of the die more than once depending on the game, but that’s cool. We removed the dice from the clever box they arrived in and marveled at their sheer weight. They a lot heavier than standard, plastic dice, and the metal points are sharp and pointy – so be careful! Don’t be tempted to use them as caltrops or thrown weapons in a LARPing game as you could put an eye out. Just keep them on a table and everyone should escape in one piece. The craftsmanship of these dice is very impressive. Norse Foundry’s “Aged Mithril” collection has a tarnished, dulled-steel look about them and very much look like what a Fantasy gamer would think aged mithril would appear as. 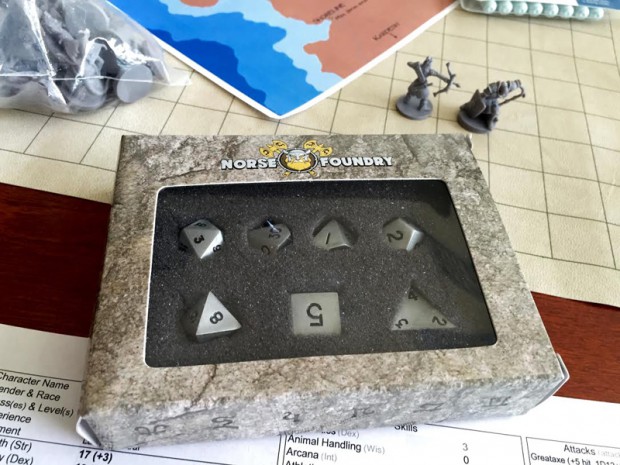 Most of the dice in this set are 16mm in size save for the D20, which is 22mm in width. These are just the right size for tabletop play and will match your more standard dice without issue. We began playing our D&D 5th ed. campaign and our party began a quest across an ancient desert in search of some old ruins. On the way, we encountered some giant fire ants. Being level one adventurers, this would surely prove challenging. I rolled initiative and was immediately disappointed as the D20 hit the wooden surface we played on then slid a short distance, not rolling at all. This would happen a lot throughout the evening as the dice were just too heavy for the light wooden tabletop we were playing on. I eventually went back to my run-of-the-mill, plastic dice as they readily bounced on the wooden table.

I thought this would be the end of my using the Norse Foundry metal dice until I corresponded with one of their craftsmen on the matter. He recommended that I pick up an RPG/TCG play mat to use as a rolling surface and explained that the two hard surfaces of the wood and the metal simply don’t play well together. I went on Amazon and picked up a basic play mat made from fabric. My RPG group then got together for a second gaming session a few weeks later. The results were like night and day – I highly recommend that you get a fabric or spongy play mat for use when rolling these metal dice. When used, the metal dice bounce a lot more and grip on the fabric, causing more randomness in the roll and a more natural feel to the plastic dice you have most likely been using all this time. 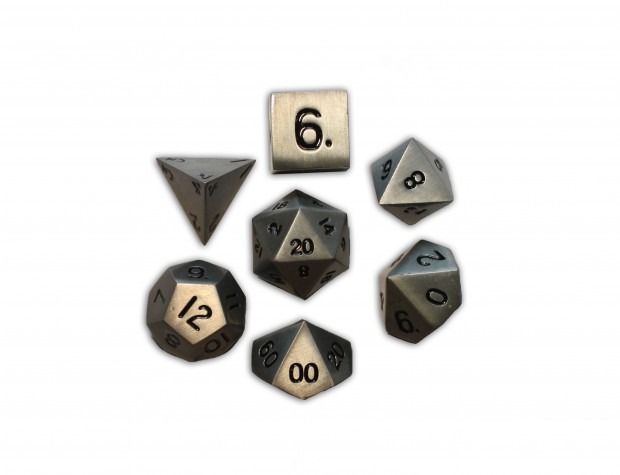 Overall, Norse Foundry is the place to go if you are in the market for metal dice. They are utterly unique and feature an exceptional build quality. Also, their prices are extremely competitive – especially if you select one of their 7 piece dice sets. Each 7 piece dice set retails for $34.99 and is available now at their official website. They have a variety of colors and surfaces – from the “Aged Mithril” we reviewed to the black and red “Nightmare” set to a brilliantly-shiny “Chainmail” set – as well as several more. Whatever your preference or style, chances are you will find something that speaks to you at their site.