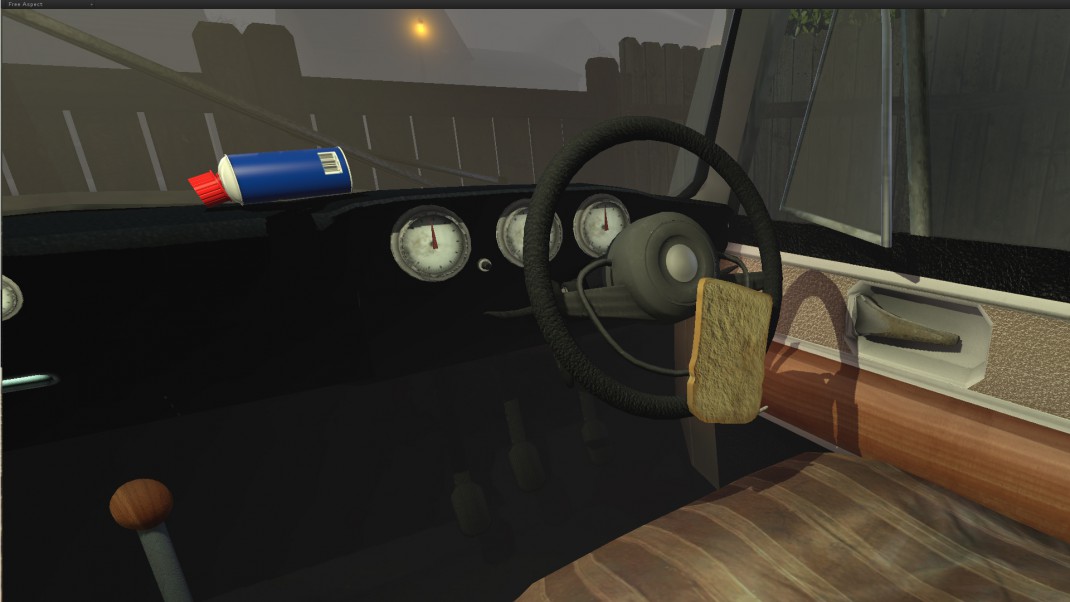 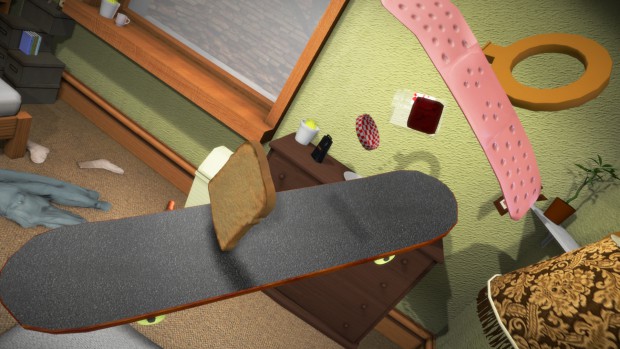 Bossa Studios UK makes some of the most unique games that I have played in a long time. I first became aware of the game studio by watching the boys over at Achievement Hunter doing a Let’s Play of Surgeon Simulator. I immediately picked up Surgeon Simulator and loved it. Michael and Gavin at Achievement Hunter then moved onto another Bossa Studios game, simply called I Am Bread. I knew immediately that I would have to get that game too, but my current work schedule has really prevented me from picking up games that I want. So I was incredibly happy when I Am Bread came down my review queue here at Gaming Shogun!

I Am Bread is a simple game in concept, but much more complex in gameplay. You are a slice of bread and your objective is to become the perfect slice of toast by any means necessary. There is no character development in I Am Bread, because you are just a slice of bread. You are not here to save the world, save the princess, or save your family. Your only goal is to become a nice piece of toast, maybe with some marmalade on you. Life as bread is truly simple.

Here is where I Am Bread becomes quite interesting. What Bossa Studios did was create a very simple concept of a story with a simple objective for the player, but wrap all that in an extremely complex game that forces the player to make choices along the way as to how to become toast. You begin each level in a room as part of the loaf of bread that you are spawned from. With no indicators, arrows, or markers to point your path, you are to become toast while staying edible. So the first thing you must do is find something in the room that has the ability to toast you.

Once you have found a direction, then you have to start flopping your way to that object. You will press a certain button that is mapped to a corner of your slice of bread to grip a surface. You then use either the mouse or the thumbstick, depending on your control preference, to flick your slice of toast to move. You will continue to grip objects and surfaces and flick your stick until you reach your destination. The controls work just fine and are designed well, but they are designed to through both your brain and your hands into some sort of argument as to which button needs to be pressed at what time. Just playing by myself, I had a hard time getting my fingers to cooperate with what my brain was telling them, so I can’t imagine how the guys at Achievement Hunter managed to get through their video without murdering each other. 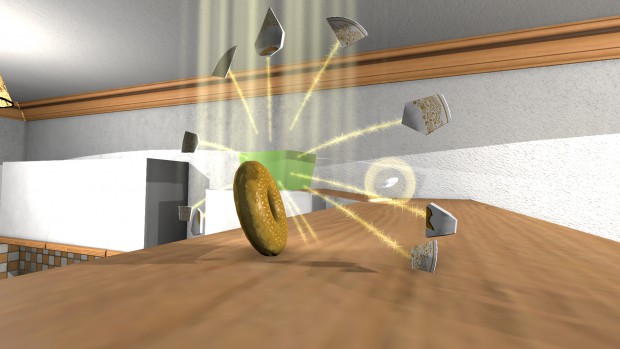 As you move, you also have to worry about your grip. Bread apparently has some tenacious grip, but it isn’t unlimited. Once your grip meter runs out, gravity will take over and you will fall to the surface below. This can be very frustrating, especially if you have struggled to work the controls as you climb a series of boxes, just to run out of grip and fall. You can also use your grip to grab objects and fling them around the level. This becomes important in some stages that will require you to use items to light a gas grill or break a window.

You also have to worry about your edibility as you move about the stages. Edibility is shown as a progress bar that is filled at 100%. As you flop across something dirty or fall into water, your edibility will begin to drain. The dirtier the surface, the faster your edibility bar will disappear. You also have to worry about edibility when you are toasting yourself. Your goal is to hit 100% toast on both sides with nice and even coverage. Focus on one spot for too long, and you will begin to burn. Burning your self will lower your overall rating at the end of the stage.

When it is all over and you are toast, you will be graded on your progress. Your grade is based on your edibility at the end, the perfectness of your toasting, and the time in which you took to become toast. It’s tough enough to navigate the stage and find some way to become toast, but to hit that with a perfect score is just amazing.

I Am Bread has roughly eight stages to it, all centered around someone’s flat. You begin at the kitchen stage, move into the lounge, then off to the bathroom, and so on. I Am Bread also has seven game modes to play that unlock as you finish the story mode. You have your standard Free Mode, Rampage Mode which you destroy items for points, Bagel Race, Cheese Hunt, and Zero Gravity mode. You can also unlock different pieces of bread that have different characteristics and physics. The baguette only has two points of contact and is a beast at causing damage, while the bagel is round and does not have the same contact points that your standard slice does.

The gameplay is where I Am Bread shines. It will be a tough game for some of you out there, just getting your brain and hands to communicate quickly enough to keep your edibility up. You do have multiple paths to follow throughout the game, so how ever you want to become toast is up to you, as long as you keep your edibility up. Once that reaches 0%, then the game is over. It’s a simple concept of a game, executed brilliantly and is just a blast to play. 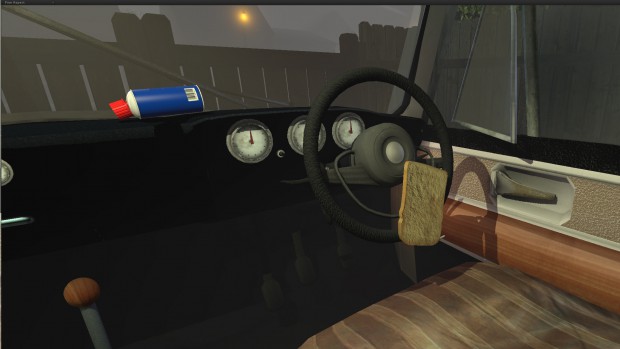 The visual aesthetics for I Am Bread provide a simple, yet fun to play in game world. Whomever lives in this flat is not keen on cleaning, as you have a ton of objects, obstacles, and hazards to move around. The developers tried to make each object look either clean or dirty, but not all. Some of the objects you won’t know will be hazardous to your edibility until you touch it. The graphics work well for the game, and will run on pretty much any PC that is working today, which is great.

The music really adds to the ambiance of the game. The music is mostly piano-based, but adds an upbeat tempo and vibe to the game experience. It is very hard to play I Am Bread without a smile on your face, due to both the absurdity of the game’s premise and the uplifting music that you listen to along the way to becoming toast.

I Am Bread is a must buy. It is a breath of fresh air in this age of dark realism and first person shooters. I Am Bread is no joke of a game, there are plenty of deep gameplay elements to be found within, under its simple and silly exterior. You can also play the game in a similar way as to what Achievement Hunter did, by splitting the control between two friends, that is if you think your friendship can last through the first level without a fist fight. I have played and enjoyed a lot of games this year, but this is the first game that I have reviewed that really made me smile and enjoy it this much. I Am Bread is available now through Steam.