There is plenty of controversy surrounding the United States Marine Corps. decision to phase out the M249 Light Machine Gun (LMG) and replace it with the H&K M27 Infantry Automatic Rifle (IAR). Opponents of the decision say that the M27 IAR is a poor replacement because of its use of standard, 30-round STANAG magazines instead of the M249’s use of  belt-fed box magazines. They also claim the M27 IAR does not suppress enemy units like the M249 does. Proponents of the decision tout the M27’s increased accuracy and lighter weight over the M249 as well as cross-familiarity of existing M4 platforms – not to mention the M27’s longer range. Whatever side of the fence you fall on, one thing everyone can agree on is that the Umarex / Elite Force H&K M27 IAR airsoft electric gun is one beautiful piece of craftsmanship.

Using the same body as their limited edition M27 IAR (in the multi-colored desert scheme), this model is all black and features the M27 IAR’s aggressive look. It also shares H&K’s stylish and comfortable butt stock, similar to the one found on the company’s 416 and 417 series rifles. The M27 IAR comes with front and rear flip-up iron sights and a very comfortable pistol grip which even feels great when wearing padded tactical gloves. This airsoft gun is OEM’d by VFC, which has a good reputation for out of the box airsoft rifles. With the VFC manufacturing, you know the quality in this airsoft rifle is going to be good – especially in its exterior details.

Out of the box, we found the M27 IAR to shoot between 385 and 390 FPS using .20g BBs, which is great for those of you playing at 400FPS or less fields. We have a lot of those fields down here in Southern California, so I was able to play with the M27 IAR for a number of games over a couple month-long period. It has a rugged build quality and, despite my inadvertent smacking it into walls, ledges, and the occasional dropping it to the ground the airsoft rifle continues functioning without problem. If you like the Umarex / Elite Force H&K 416 D airsoft rifle, you can expect a lot of the same feel during play save for the M27 IAR’s longer barrel and rail system.

While the role of the gun in real life is a hot button among the gun community, the airsoft version has its own version of this controversy – albeit to a much lesser extent. In military simulation (MilSim) airsoft games, effort is put into making sure that teams are made up of classes, similar to those found in your favorite Battlefield or Call of Duty title. There are assaulters, snipers, designated marksmen, support gunners, and more. In many of these games, the support gunner role is the only player that can field a box or drum magazine and, in more extreme cases, use fully-automatic fire to simulate its real-world suppressing fire capabilities. 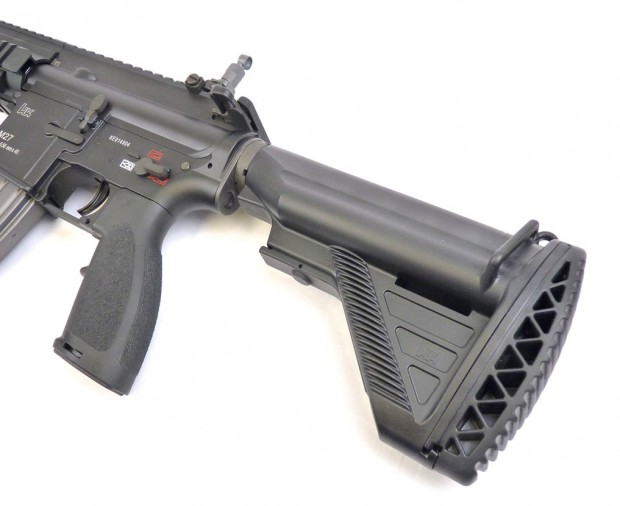 Even though this weapon is now a dual-purpose support gun/designated marksman rifle for the USMC, some airsoft game hosts are still deciding in what role this airsoft gun can be used in. This is important depending on what your purpose for this airsoft rifle is. If you are picking it up for public games at your local field, you probably won’t have any issues. However, if you are picking it up to attach a box magazine to and use as a support gun in MilSim games, you might not be allowed to do so.

Despite this, the Umarex / Elite Force H&K M27 IAR is one classy and high-performing airsoft rifle. I was able to run and gun with it in both assaulter as well as support gunner roles thanks to a nifty box magazine I picked up from my local airsoft shop. It is, plain and simple, a lot of fun to field and shoot. The M27 IAR may be a little beefier than your standard M4 style airsoft gun, but when you bring it out on the field, I guarantee you that heads will turn. The Umarex / Elite Force H&K M27 IAR is available now and retails for around $450 dollars depending on the retailer you buy from. We recommend Evike or AirsoftGI when possible as they usually have good customer service.