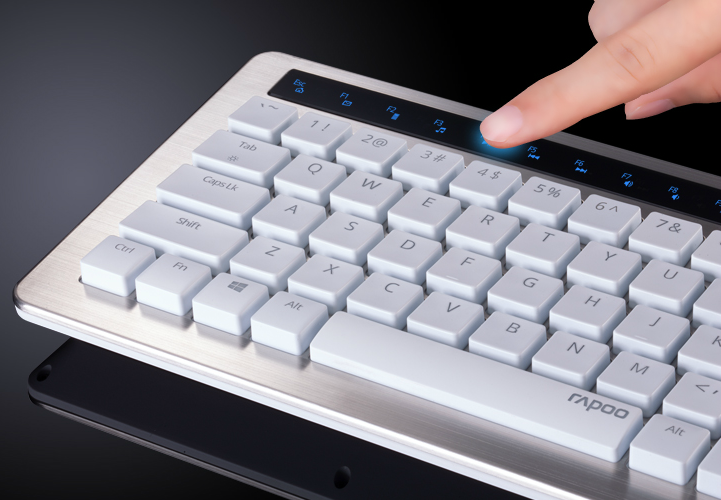 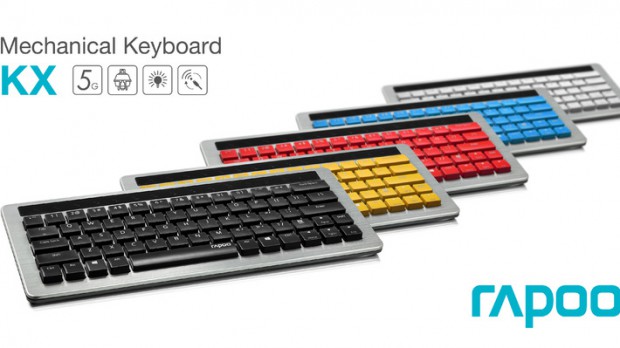 I blame gaming for my keyboard snobbery. I was fine at first as a casual gamer having a keyboard that lit up pretty and had a few programmable keys. Then I got my hands on my first mechanical keyboard and it was all changed. Pretty soon I found myself hooking them up to my laptop so that I could get the tactile response I had become accustomed to even when I was on the road. Then an unpleasant thing happened during that period of time… I became disabled. My new condition demanded I spend more time in bed which also meant more time on laptops and considering my laptops are gaming laptops the heat issues from them have always plagued me. So now the keyboards attached to the laptops weren’t just for enjoyment but for necessity, I have to put the laptop nearby and write on a separate keyboard. Full size keyboards tend to be difficult to type on in bed but smaller keyboards tend to lose the tactile response. Now Rapoo has the solution with the KX Dual Mode Mechanical Keyboard which not only provides one of the smallest mechanical keyboards on the market it can be used wireless and has backlit keys!

Hands On:
First off should be addressed is the key design. With full size light up keys it is easy to keep your place on the keyboard. The keys are also slightly elevated rows like in a movie theater so that the row above is slightly higher which helps keep your fingers from slipping. This can be handy also since you may not be resting the keyboard on a flat surface and the slope of the keys helps you hold it in place as well as avoid key slippage. The light-up keys are really nice too especially for evening for night typing or gaming. Most laptops don’t have this feature so it is particularly helpful. For thews that concern themselves with such things there is also no keylight bleed-through on the sides of the keys which can be a bother to some.

The mechanical keys have the response you have come to expect on that type of keyboard, a distinct click as well as a spring response under the key. You know you have hit the button and you have a pretty good idea when you may not have hit a key hard enough or may have accidentally hit two keys. This does bring up the point that with the compact configuration of the keyboard anti-ghosting would be a great addition especially for folks with huge bear paws like I have but as long as care is taken while typing this isn’t so much an issue and when it comes to gaming is a mute point. 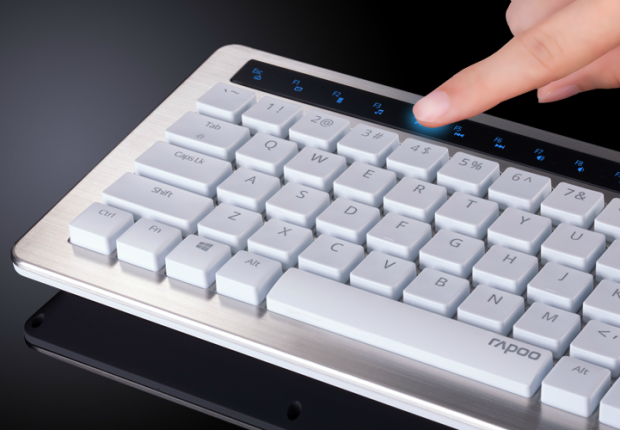 While on the subject of the compactness of the keyboard I am amazed at how well this was done while maintaining a key buffer around the edges to protect the keys and give a surface to rest the edge of your hand on. This was partly accomplished by making the F row of keys as well as escape and delete touch buttons. Personally I have no problem with things, it actually helps separate the numerical keys from the F keys during gaming which is really important. Some might be bothered that such important keys such as ESC and DEL are on that row but personally it was no bother for me and once again helped located escape quickly.

My only complaint at all about the minimizing process is that the left shift key has been reduced to a normal size key and the up arrow is located where the inside part of the shift key would be. As a result I find myself accidentally paging up regularly when I am trying to capitalize something. Once again gaming wise this really isn’t a problem but typing wise it was something to keep in mind so much as to become a distraction. If the print button were moved up to the F row and the left windows button removed the arrow keys could be shifted over and the problem fixed. Up until this point in this review I was actually writing on the keyboard while laid up in bed but I hit the arrow button in a way that caused random sections of a sentence to be spread throughout the review for every time I went to capitalize a word or just “I”.

To be mechanical the thickness and weight of the keyboard had to be increased, making the chassis plastic instead of metal might have helped the weight issue but at the cost of durability. This keyboard feels tough and as though it could take a real knocking before showing any problems.

Last but not least is cutting the tether and going wireless. That is one of the key features of this keyboard and probably the reason many people will pick it up. It uses a USB dongle to accomplish this and surprisingly doesn’t seem to have any latency issue as compared to being plugged in. With the lights, touchpad section, vibration response and maintaining a strong connection the keyboard sucks up a bit of juice but for the average typing session or gaming run it will probably stay energized and worse comes to worse you plug it into charge and hardwire which can become quite a distance with a USB extender cable. 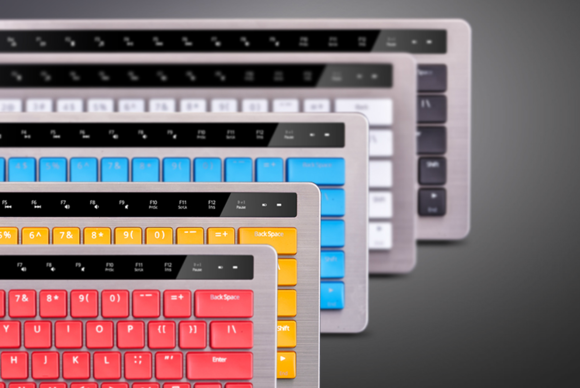 Last Call:
The Rapoo KX Dual Mode Mechanical Keyboard fits all the mechanical keyboard features you would want into a compact wireless design. The left shift button area could really use a redesign and if that happens it will be a hard keyboard to top.