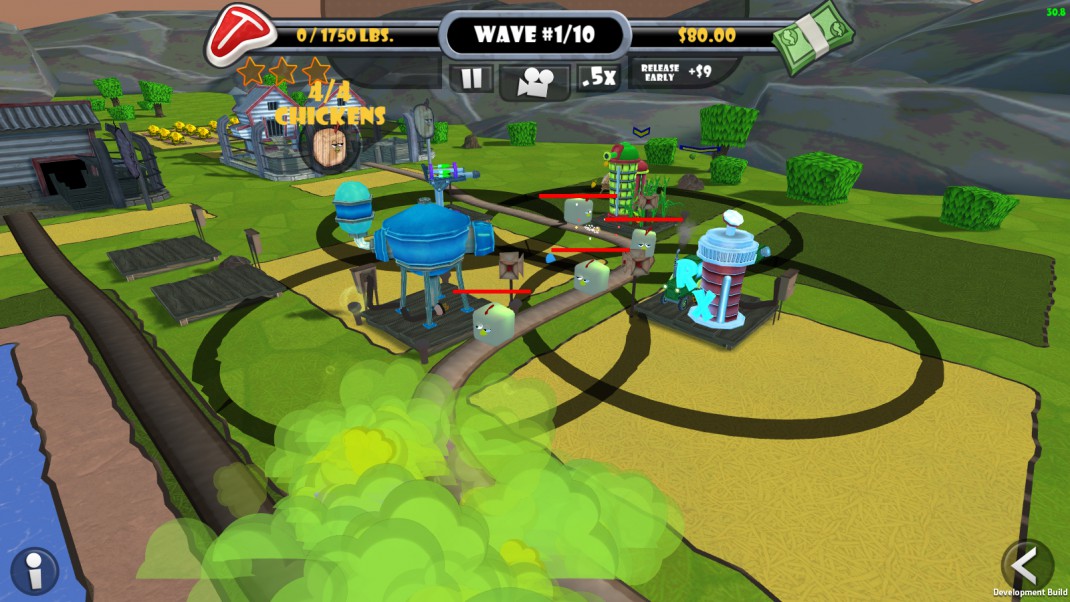 In Fat Chicken, you play as a manager of a meat production farm that raises, fattens up, and then slaughters meat for consumption. You begin your career in Modesto, CA with chickens. As you fill up your quota for meat by the pound, then you will move onto the next city and begin working with pigs, then cows, then mixed stock. As the game progresses, you are able to hire managers and other employees to help fatten up your stock, or keep them alive longer so that you can collect more meat. You will also have to contend with protesters that want to shut down your production, since you are using growth hormones to enlarge your animals.

The story is the epitome of a casual game story line. It is short, sweet and to the point. There is no character development here, just cartoonish characters with obvious agendas. As the story progresses, you will have to contend with more enemies to protect your stock, like the aforementioned protesters and aliens that have come to probe your cattle. This does raise the difficulty of the level by adding in an extra layer of items you must keep track of, but doesn’t raise the difficulty up to anything a normal gamer would have to worry about.

Game mechanics are what you would expect in a typical tower defense game, but most of your towers will now be designed to save your live stock instead of killing it. You begin the game with hormone and corn towers, designed to enlarge and feed your stock. You must be careful not to over feed or enlarge your stock, because that could cause death of your tasty and delicious little minions. You may also need water towers to hydrate your stock, if your stock’s track does not cross any puddles or ponds.

Each farm has a different layout that is designed along a track for the stock to run along. The stock begins at the starting point, then moves throughout the farm, until it reaches the slaughter house. Towers can only be placed on boards along the track, and the fatter your stock is when it hits the slaughter house, then the more money and stars you earn. Money can be used to buy more towers, or upgrade existing towers to be more efficient.

You can even hire heroes and helpers to help defend or manage your farm. Farm hands armed with prods will hurry the stock along, helping to prevent death and shrinkage. Managers will give you bonuses, and you can buy upgrades and power ups between levels to use. All in all, there are 26 levels over 13 different real world places throughout the United States. Enough material here for a casual Iphone game, but you can blow through this pretty quickly if you sit still for a few hours.

Fat Chicken does have a delightful cartoon look to it. The stock and the people of Fat Chicken look like they were designed in the same world as the Angry Birds, which I can imagine was intentional, just a little more blocky. They remind me of the Little People my son used to play with as a toddler, all head and torso with no limbs. The graphics are cute and entertaining, but will not win any awards for technical merit. The sound itself is also cute and light, with a decent original soundtrack that plays nicely in the background. The sounds of the stock are exactly what you would expect them to be, though I wish the death sounds were a little more pitiful, it would have added an extra layer of dark humor to this game.

Fat Chicken by Relevant Games is a very nice, casual game that just does not have a home on my PC. This is the sort of game that I would enjoy passing a few minutes here or there as I waited for my take out order to get ready, not to devote a few hours of sitting in front of my monitor to play. In fact, being on the PC really brings to light just how fast one could blow through these games. My recommendation is pretty simple, if you have an Iphone or Ipad, pick up Fat Chicken right away, it’s definitely worth your time and money. If you don’t have one of those platforms, and must absolutely have a new tower defense game, then I would recommend this game for the PC, otherwise it’s one that could be skipped for the PC. Fat Chicken is available now through Apple and Steam.