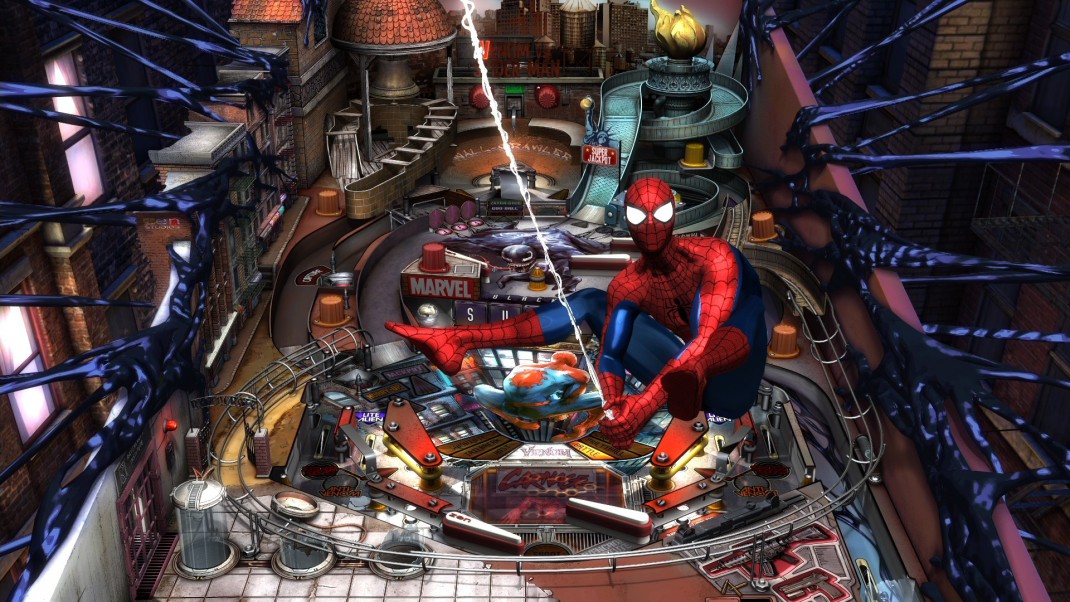 Zen Studios definitely knows the physics of the little silver ball. Other companies have come close, but Zen seems to have mastered it to the next level. Playing their tables, it is easy to believe that the little digital ball dancing around a table full of animated creatures is the real deal. Their latest table in the Marvel Pinball collection, Venom, is no exception and adds another great addition to an already stellar collection.

Hands On:
Usually, I would have a description section to let you know what the table is about but if you don’t know who Spider-man’s nemesis, Venom, is you probably don’t care and that’s fine – you can still get great pinball play from it regardless. Venom is at his creepy best as he leaps across the top of this medium length multi-tier board with rockin’ music playing while a very pissed off Carnage paces in a holding cell visible through a window in the bottom of the table. Spidey is at the base of the table watching on and quipping at your mistakes on the board since, technically, they are Venom’s. Venom’s tendrils slowly creep over the edges of the table but don’t interfere with the action that is controlled by five flippers and fast bumpers and winds around in what I would guess is supposed to be a swinging pattern through metal piping.

The table looks like a real table you would see in an arcade and all the elements are ones that would be recognizable to a video pinball junkie like myself. At the same time, the heroes and villains look right out of an animated movies but seem to really come to life. For example, Venom jumps onto a wall of the table to avoid your ball when it comes towards a bumper he is standing on and you keep waiting for Carnage to break through the barrier which is invisible hexagons that only become visible when struck like those in the Agents of S.H.I.E.L.D. television show. I love playing pinball and when I hit my stride I can run with the best. The true aficionado is my wife who can finesse the maximum amount of time out of a single ball and I could watch her play this table for hours which she can just about get out of a single play. I’m not saying this is an easy table, actually it is a fast table especially for a medium length and you need all five of your flippers to control the action but if you get a pinball wizard playing it is magic to watch. Besides, the game is worth watching for the banter among the characters alone.

The only complaint I could have is that these tables are so good that there should never be just one table in a download, it should always be a few.

Zen Studios does a great job with pinball and the latest Venom table is no exception. If you like video games and you like pinball you’ll love Zen Pinball 2 Venom. If you like Marvel comics and Spidey you should be downloading the game right now. This minute. Go ahead, the internet isn’t going anywhere and you need this game!