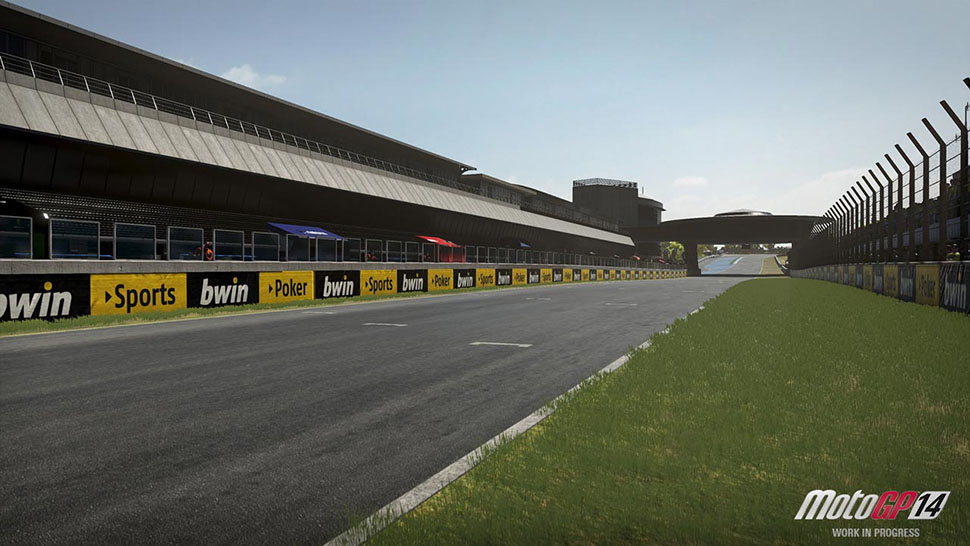 Italian game developer Milestone has finally released this year’s MotoGP game here in the US. Originally released in Europe in June, MotoGP 14 faithfully reproduces the world of MotoGP, Moto2, and Moto3 circuits. For those of you that may not know, and if you are an American there is a good chance you don’t, the MotoGP 2014 campaign was raced on 18 circuits in 13 countries, with all those races being faithfully reproduces in MotoGP 14. MotoGP, like Formula 1 racing, has taken a back seat here in the States when compared to Motocross. So a game like MotoGP 14 will fly under many radars here in the States, which is a shame since it is a very tight game that does a lot right.

Like most racing games, there is no real story in MotoGP 14, so we shall just talk about the actual circuit and courses that you will see in the campaign mode. Campaign mode allows you to create a racer, using a default type skin with a few choices of gear from the beginning. You begin your MotoGP 14 campaign by signing with a racing team, then hitting your racing goals that are set by your team. The better you do in a race, the more fans are attracted to you and the better your racing team offers become. You can sign with different racing teams thorough out the campaign, getting better offers the better you do in a race.

Character customization is extremely limited, really only coming down to changing out your helmet, gloves and boots. Considering you will spend the majority of your time wearing these items, MotoGP 14 can be forgiven for not allowing the customization of what you rider will actually look like. The more you race and win, the more items you will unlock. The items only have a cosmetic effect on the rider, and the color of your suit and bike will be determined by what team you sign with. All the major teams are represented, along with many minor ones. Your goal being to race well enough to received a contract from teams like Repsol Honda or Ducati.

The circuits are faithfully recreated in MotoGP 14, and have had a graphical face lift compared to last year’s edition. Not having played MotoGP 13, I have to say that I wasn’t impressed with said graphical face lift, but more on that later. The circuits include greats like Le Mans in France and Silverstone in the UK and the two circuits from the United States in Austin and in Indianapolis. 18 circuits in all are in MotoGP 14 to accurately represent the real MotoGP campaign from this year.

MotoGP 14 is a great balance between arcade and realistic racing. Options can be used to give the player the experience of their choice, whether they just want a fun arcade style racer, or really turn on the realism and include damage and realistic motorcycle controls. Switching between the two, I could fee the difference immediately especially in the corners. Arcade style is much more forgiving in regards to speed and angle of your bike when you turn, while realism mode holds you accountable for every little thing you are doing wrong. MotoGP 14 does a great job in making both accessible for every player out there. Whether your new to the series or an old pro, MotoGP 14 can be adjusted to your skill level.

This game also has a ton of different game modes, with is the truly the life’s blood of any racing game. Career mode is here, and is deep enough to give you an accurate representation of the MotoGP life. You also have other single player modes like Time Attack, Grand Prix, Championship and Scenario. Scenario mode is a fun mode, placing you into different scenarios from past MotoGP races. Multiplayer modes are similar in tone, with Grand Prix, Championship and Sprint seasons available, along with a Split Battle mode where players compete for the best split time in their laps. The difference between the Grand Prix, Championship and Sprint seasons are the sizes of the motorcycles being used. 250cc, 600cc and 900cc motorcycles are used, depending on the race being run.

Here is where MotoGP 14 falls apart for me. Everything I have read in regards to MotoGP 14 says that it is supporting a new sound and graphics engine to look better than ever. Well, I would hate to have seen what MotoGP 13 looked like, because MotoGP 14 still falls short of my expectations for a PS 3 game. I could be jaded in regards to my expectations due to games like Last of Us, but MotoGP 14 does not compare to other PS 3 games on the market graphically. Lighting is good, shading is good, but for the overall impression and presentation, MotoGP 14 comes up lacking.

The sound design for MotoGP 14 is very good. I like the sound of the engines as they roar through the circuit, but again I can’t tell how this is an upgrade over the last version. To me, the game sounds like it should, not like an improvement. While this does lessen the experience of MotoGP 14, it is not a deal breaker on an otherwise great game.

MotoGP 14 does a fantastic job in bringing the MotoGP 2014 campaign to the PS 3. Every lap, circuit, professional rider and race team are present and faithfully recreated in the game. MotoGP 14 also brings a lot of game modes to the table, with Scenarios, Career mode, and three different racing circuits with different sized motorcycles. Online mode is also deep, supporting 12 player online races, and even a two player offline mode with split screen. Nice to see some split screen action still, that mode seems to be showing up less and less in video games coming out lately. Milestone says that it improved the sound and graphics engine over MotoGP 13, but having not played MotoGP 13 I cannot see the improvement. I can only compare it to current PS 3 games, and MotoGP 14 just does not match up graphically to those. Overall, the graphics gripe only lessens what otherwise is a great motorcycle racing game, and can be forgiven when the game play is just that fun. MotoGP 14 is available now for the PS 3.