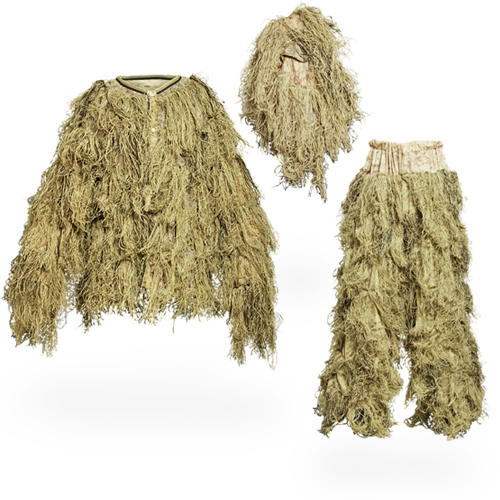 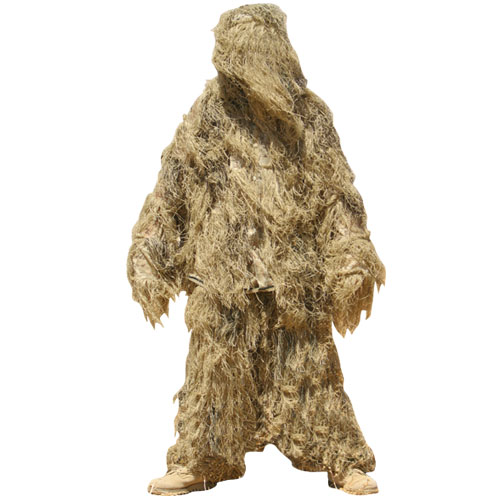 Wearing a ghillie suit as an airsoft sniper is one thing – effectively using a ghillie suit is an entirely different thing altogether. Condor Outdoor has created an all-in-one ghillie suit pack that comes in four individual pieces: A pair of pants, jacket, hood, and rifle wrap. Together, they form a heck of a starter ghillie for players on a budget. Retailing for about $75 dollars (with retailers like Evike having it on sale for about $20 dollars less), you also get a nifty nylon carrying bag for the pieces. The ghillie suit set is available both in “woodland” as well as “desert” color schemes – which mainly affects the color of the synthetic fibers which make up the concealing pieces of the suit. Both colors are a bit monochromatic, but if you really want to be effective in this role, you are going to want to customize your ghillie suit by doing things like adding foliage and other assorted pieces of flora to it – preferably, from the area of operations you will be playing in.

Donning the suit is easy, with the pants and button up jacket being nicely sized to fit over your combat gear. The pants slip on over your tactical pants and cinch up via nylon tie cord. The jacket is, as previously-mentioned, button-up, which allows you not to have to put it on over your head if you are wearing a helmet. The hood actually ended up being the most difficult thing to don over my tactical gear and it would not fit properly over my OPS CORE helmet. The hood does, however, fit over most paintball masks and if you wear, say, a Dye I4, you shouldn’t have any problems. The viewport of the hood is made from a nylon mesh and doesn’t obscure the wearer’s vision too much. I do suggest wearing a mask that is not smoked or tinted, however, as both tinting and the mesh can cause some problems.

In terms of on-field effectiveness, I was completely impressed. Even at one of the smaller local fields I frequent, I was completely blown away by how effective this suit was. People were just not expecting to see a ghillie suit on the field, so their brains simply did not put the visual pattern of a human being in one. On larger fields, the effect was amplified. I even had a couple of instances where opposing players were easily within my sniper rifle minimum engagement distance and just kept moving by. Granted, it was perpendicular to the direction I was facing, but it still had a cool Call of Duty stealth mission rush to it. It should be noted that I have no sniper or stealth experience whatsoever. In fact, I am usually a bull in a china shop. Also, I had not performed any customization to the ghillie suit, so had they been moving directly towards me, I am pretty sure the jig would have been up. The biggest issue I encountered with the ghillie suit set was that the jacket goes over your combat gearing, and this does not allow you to easily get to magazines when you need to reload. My suggestion is that you leave the front of your ghillie suit jacked unbuttoned once you get to an area to hunker down – that way, if you need to reach your magazines you can. I also suggest you keep your combat gearing as high-speed, low-drag as possible. A chest rig is ideal – nothing with plates. Your goal in wearing this is stealthy movement, not protection. If you are worried about getting hit by airsoft BBs, a ghillie suit is not for you.

The most fun time  I have had with the ghillie suit had to be on Halloween night. For most of the evening, I wore the ghillie suit up while hiding in the bushes across from my apartment door. After trick-or-treaters would get their candy and turn around to walk away, I would jump out at them. This caused lots of fun scares and a few to burst into tears. I feel bad about those instances… But, I digress! Again, thanks to the folks at Evike.com for sending the suit over. The countless scared kids running away from my front lawn with candy bags flailing about made my Halloween. 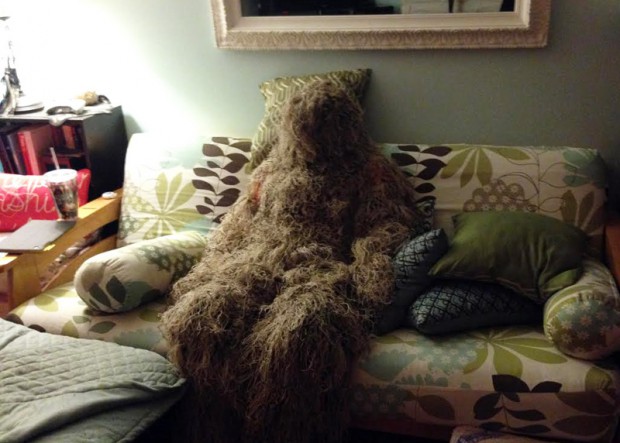 Tired after a long night of scaring the kids

Overall, the Condor ghillie suit pack is an excellent and cost-effective way to start your career as an airsoft sniper (or real steel hunter, bird watcher, etc). My biggest suggestion would be to make sure you customize it. Customizing the suit takes its effectiveness to the next level. You should soil your ghillie suit with dirt, mud, etc. Drag it around for a bit on the ground. Add little bits of real foliage to the strands of artificial fibers. Spray paint it to match a bit closer to the color pallet of the environment you are playing in. Additionally, this suit was light enough that it won’t cause you to suffer from overheating on warmer days – just remember to hydrate!

You can purchase the ghillie suit set over at Evike.com!