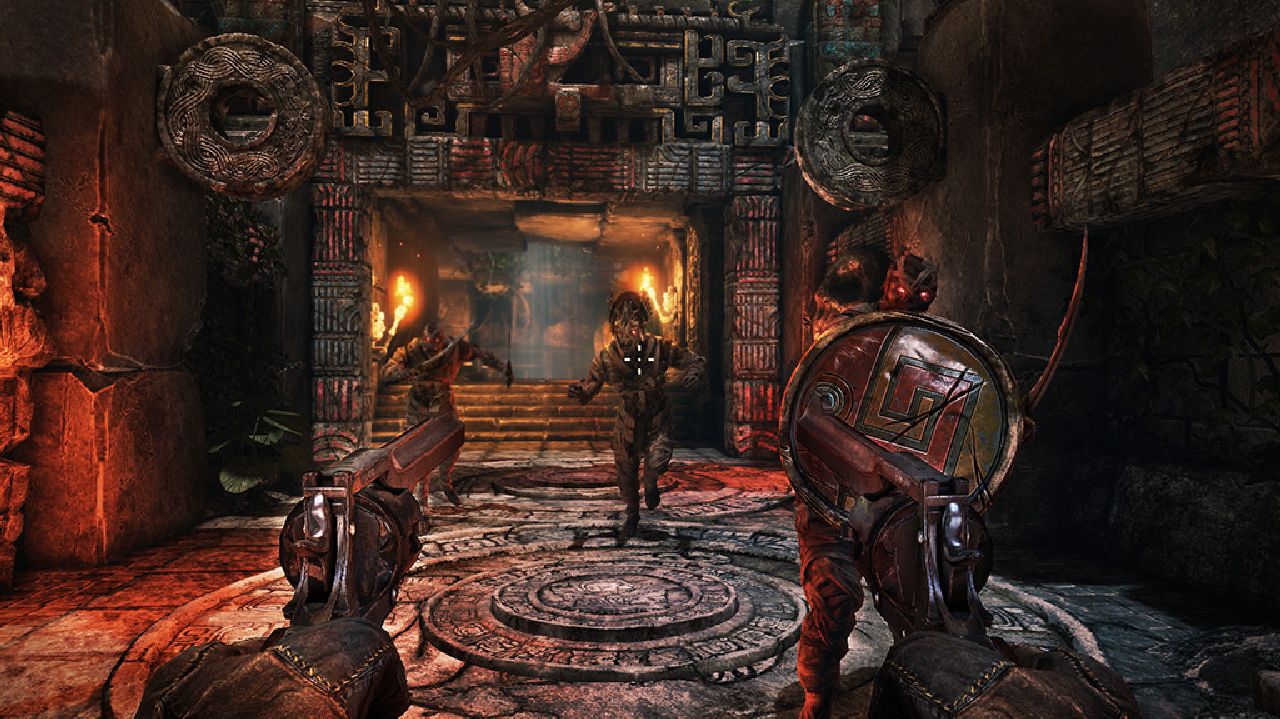 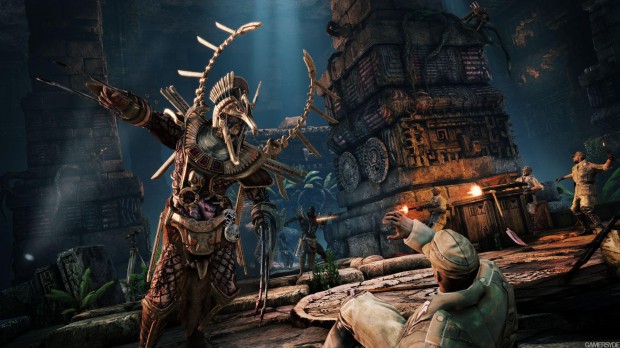 The only thing I love more than a good first person shooter is a good first person shooter game with Nazi!  The only way to make that combination a bit better is making it feel like Indiana Jones, with adventuring and puzzling.  Well, anyone who loves all that like I do needs to head right out and pick up Nordic Games new title, Deadfall Adventures.

Storyline:
The year is 1938. James Lee Quatermain is a man of many talents, yet holding on to money isn’t one of them. James is an adventurer by trade, just like his legendary great-grandfather Allan Quatermain. And he knows how to squeeze money out of this famous name of his, while at the same time despising it. Despising those who believe his great-grandfather’s tales of the supernatural and those who make fun of them alike.

Accordingly, Quatermain isn’t all too keen on escorting Jennifer Goodwin, an US agent and former colleague of his, to an Egyptian temple structure in order to retrieve an ancient artifact – The Heart of Atlantis. Neither does he believe in the reputed invigorating qualities of this artifact, nor does he care the least that a division of the Ahnenerbe, the Nazi department specialized in the occult, is after The Heart as well.

But life has its ways of changing one’s perspective. Quatermain soon finds himself part of a hunt across the globe – from the stormy deserts of Egypt to the icy depths of the Arctic, and all the way to the steaming jungles of Guatemala. In long forgotten temple structures the thrill of the chase awakens the true adventurer in Quatermain, as he and agent Goodwin strive to be one step ahead of the Nazis and the Russians, one step closer to obtaining the Heart of Atlantis. And deep in these temples, where age-old guardians awake from their eternal slumber, James soon learns that his great-grandfather’s stories are not as crazy as he had always believed. For all things live forever, though at times they sleep and are forgotten… 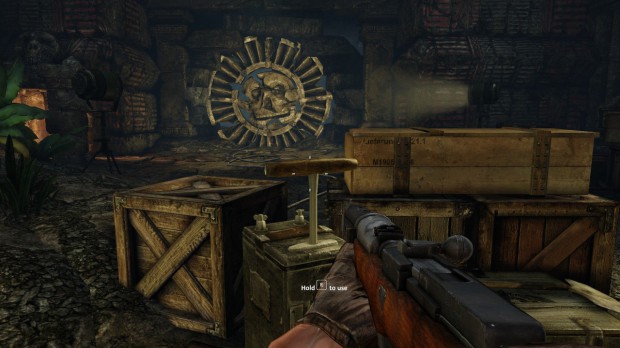 Description:
Deadfall Adventures is an action-driven first-person shooter, spiced up with elements from action-adventure games. Become an adventurer, hunt for treasures, explore unknown regions of the world and rescue the damsel in distress from the clutches of enemies, both earthly and not-so-earthly.  Join James Lee Quatermain on his journey across the globe!

Features:
– Action -Adventure gameplay from a first-person perspective
– Set in the Quatermain-universe, created by H. R. Haggard
– Fast-paced action and intense, accurate FPS gun battles
– Adventurer equipment: compass, treasure maps, notebook and flashlight – necessary to solve ancient puzzles, find treasures and even to defeat certain types of enemies
– Puzzles that encourage you to explore the game environment and interact with it
– Environmental traps that can be used to eliminate enemies in many spectacular ways
– Exotic, picturesque locations from around the world – Egypt, Arctic and forgotten
– Mayan ruins in the jungles of Guatemala
– Compelling story faithful to the spirit of classic action-adventure movies
– 1930’s setting, including detailed weapon designs
– Unique adventurer-style multiplayer features and modes 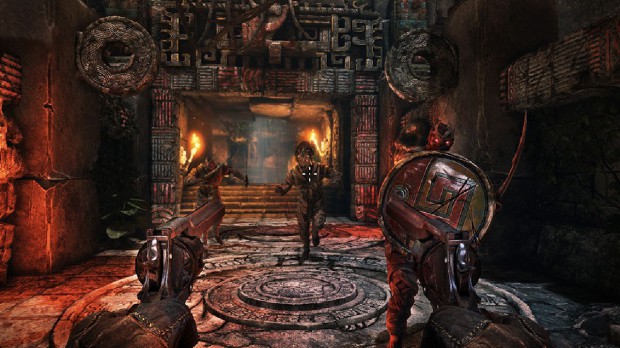 As I mentioned above, I love the combination of theme, storyline, and game style that come together for this game.  I like the fact that instead of going with Indiana Jones, which has been explored heavily with varying success, the game goes with the Quatermain universe, one of the greatest ever created and the godfather of tomb adventure genre that is far less familiar to current generations.  This can be a bit risky (John Carter comes to mind) but in this case works beautifully.  Your character is the great grandson of Allan Quatermain – so, though James is expected to have treasure hunting in his blood, his character doesn’t have to match that of his great grandfather.  The storyline is fun and fits terrifically with a nice mix of humor and gravity where needed and the acting is pretty good.  So it isn’t just a pretty game, it tells a story worth playing.

Of course, a game can look great (which it does) and have a great story (very nice) but, if the gameplay wanes, then it is all for nothing – nobody will stick it out.  Thankfully, Deadfall Adventures plays great both as a first person shooter and as a puzzler.  One of the fairly unusual options of this game is that you can set what level of difficulty you want the puzzles to be independent of what difficulty level you set the enemies to be at.  So, if you really aren’t into puzzles but you love a shooter (and especially shooting Nazis) then then you can set the puzzles to easy and make your enemies harder and gun away.  If you love a good puzzle you can make them really hard, maybe make the enemies easier and make adventuring your priority.  This is a great option I hope more FPS adventure games pick up on so that it really can cater to any audience.

Gameplay is pretty straight forward control wise following a FPS standard.  Hitting the middle wheel on the mouse lets you quick select weapons or put something like a journal or a flashlight in your off hand.  Personally I like when a map or clue can be taken full screen but it definitely lends itself to the authenticity of the first person perspective to have it in a hand instead. 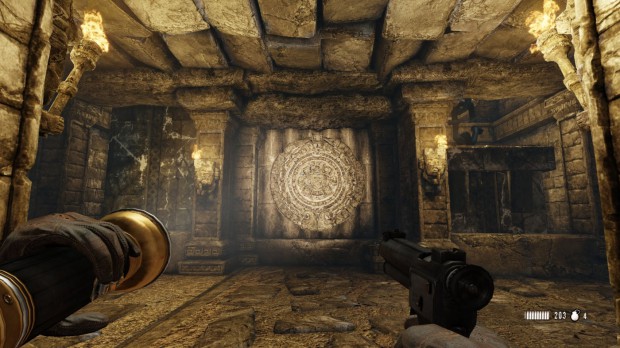 Deadfall Adventures is a great FPS adventure game that lets you kill Nazis, shoot Thompson sub-machine guns, search for treasure, and maybe save the girl along the way.  The acting and dialogue can get a bit hammy at times but that really fits the characters and time period as well.  With the ability to set difficulty levels separately for puzzle and enemy makes this game a great play for an even wider variety of audience.  All I can say is I hope there are sequels and that they are as good!