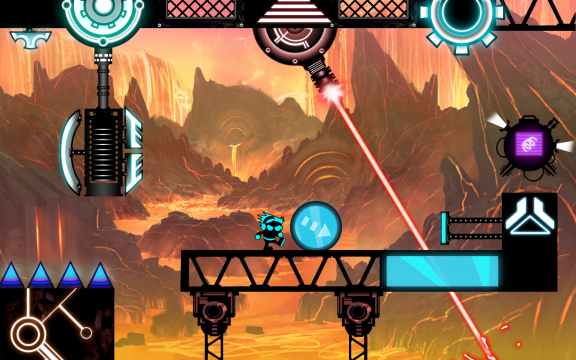 I’m not going to spend much time here on Rush Bros. story line, because it is almost non-existent. Rush Bros. is about two DJs that have decided to split apart to chase solo careers. However, instead of just creating more music individually, they decide to race each other through various levels of obstacles, traps, and jumps. There is no character development, no twists in the story, and really nothing else to discuss in this department for Rush Bros. What you see is what you get and the entire game will live or die by its game play.

Rush Bros. is the type of game that makes me really wish I had a game pad for my PC. While the controls using the keyboard and mouse are very solid, using a game pad will get you the most control and enjoyment out of the game. Rush Bros. is a platform game, you will run through each level and try to reach the end within the time limit while avoiding the various hazards that are in your way. You have all the skills available to you that you would normally have in a typical platform game like sliding, double jumping and wall jumping. As you progress through each level, you will run across power ups that will increase your speed or jump distance to help you finish the level faster.

What XYLA Entertainment tried to do to separate Rush Bros. from the crowd was to allow a custom soundtrack that would alter the game’s level design. However, what it really only alters is the background and the tempo of the hazards within the game, while the actual design of the levels stay the same. If you choose to listen to Reverend Horton Heat, the tempo of the level’s hazards will fall inline to the beat of the music, which will be much different if you selected someone like Slayer to listen to. While this is an interesting game play mechanic, it just doesn’t really save Rush Bros. from being overly generic and not as good as a game like Super Meat Boy. In terms of sound and music, Rush Bros. again scores high marks. The soundtrack that comes with the game is very solid, as well as the sound design. There is no voice acting, but I didn’t expect any once I saw how much effort was put into the story line for Rush Bros. It is the ability to allow custom soundtracks that really helps Rush Bros. from being on the low end of platform games. If you choose to use the custom soundtracks, then the music design is up to you.

Rush Bros. is an interesting concept that is made mediocre by not really having anything other then custom soundtracks to separate it from the pack. XYLA Entertainment has something strong here, but it will need some more refinement to really make Rush Bros. a must play. The game’s visual style is strong and interesting to look at, but the actual game play is generic and mediocre at best. What saves Rush Bros. from being forgettable is the use of custom soundtracks to change the beat and tempo of the game’s traps and backgrounds. However, even that isn’t enough to keep Rush Bros. from being just mediocre. Rush Bros. is available now through Steam Greenlight.