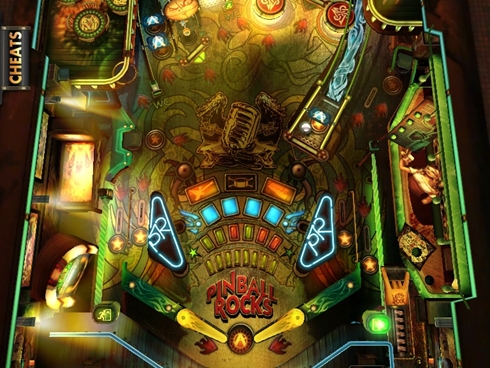 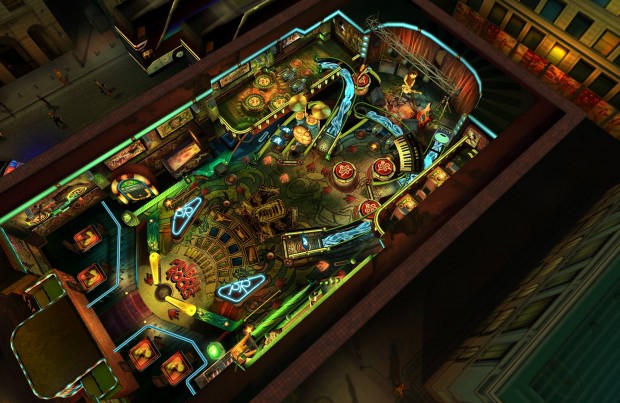 We can’t afford a pinball machine, but our house is still known for playing a mean pinball. Most people who travel to Vegas are more interested in the shiny roulette ball than a table with flippers. We’ve made the trip with just the Pinball Hall Of Fame Museum on the agenda and accomplished little else on the visit.  So whenever a video version comes along we have to give it a try, there really is no replacement for a real table but, with the proper physics, a game can be the next best thing. At the very least, it’s far more affordable and usually more portable. The folks who made Pinball Rocks HD seemed to be on the same digital page as us.

So for your money, in this case for free, you get one table with the option to unlock more tables or more music.  The table is designed to look like a club with a rock band on the stage and a hot bartender waiting to serve up drinks.  The table has ramps about where you would want them going to an upper level with plenty of bumpers and lights all over the place.  The soundtrack includes such bands as Chevelle and Filter and rocks pretty well without a headset but definitely hits the next level if you are wearing them.  A sexy female voice does a commentary of sorts letting you know when you have completed a mission or with a slightly less sexy and more annoying voice when you have lost your ball.  The plunger is a “rock on” hand which is one design I would have never have thought of for a plunger.  Every time you lose your ball the music changes tracks which definitely keeps replay going and you can buy a whole bunch of different songs for your pinball jukebox or an even better idea unlock the other four tables for $2.99 each. 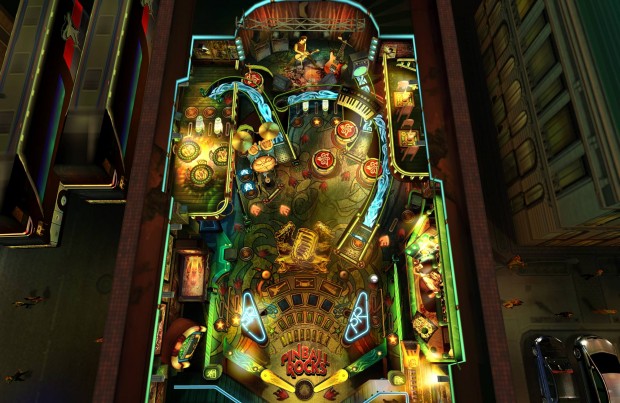 What is really, really key is ball physics. If the ball doesn’t feel right on the flippers, if the flippers feel soft, or movement doesn’t look like it has an actual table slant that increases on ramps – all are bad signs.  If any of that is even a bit jacked up, it can throw the whole game off and make it completely unplayable to a real pinball fan.  Luckily, the physics in this game are very solid. The bumpers bounce seemed a touch off from time to time but no more than a real used pinball machine can be, so in a sense it could be said to be spot on.  I can honestly recommend this game’s physics (which means recommending all Gameprom’s pinball machines), though I sure wish I could get the other tables to tell you for sure… ok just to play them.

Pinball Rocks HD is a great take on the pinball machine with very solid physics and a rocking soundtrack that makes you feel better about losing your ball since that means a new tune on the jukebox.  It is free, which is a very good selling point, with a whole bunch of great rock with the original unlock.  If you get bored of the table, you can always unlock another one for just a few bucks and rock on.