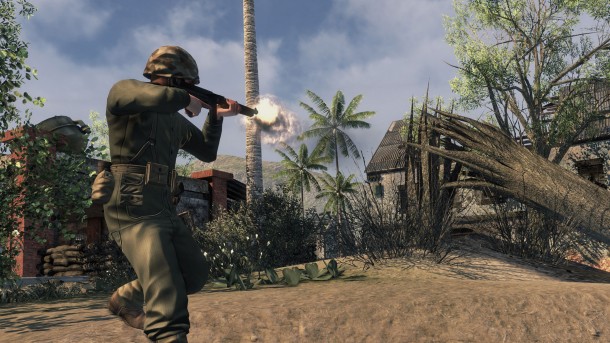 Sometimes it is just nice to have a good old fashion World War II first-person shooter to play.  Not a new conflict to portray in shooter games, World War II has been a hallmark location for these kinds of games: A time of increasingly-stronger weapons but still a lot of close combat options.  It probably doesn’t hurt that we won it either. 🙂  Battlefield 1942 and its subsequent DLC packs still rank as my top first person shooter experience, so if you can give me a Pacific theatre oriented campaign with excellent graphics and realistic weapon reproduction, I will be all over it. Thus, I have been all over Rising Storm.

Rising Storm is a first-person shooter game based on the Pacific campaign of 1941 to 1945. It takes place in several famous strategic locations.  The game covers the famous island-hopping campaigns in the Pacific as the US Army and US Marine Corps fight it out with the Imperial Japanese army and Special Naval Landing Forces.  Featuring some of the most brutal fighting in the Pacific theater, players are able to experience beach assaults, jungle fighting, close quarters night fighting, and more across places like Guadalcanal, Iwo Jima, and Saipan.  The player is able to take the part of either side – American or Japanese – battling it out online in full player versus player multiplayer.

Rising Storm is being created in a first-of-its-kind collaboration between a mod team and a professional game development studio.  The Rising Storm team is made up of the best independent developers from the modding community and several members of the development team at Tripwire Interactive.

If you haven’t play Red Orchestra then you may want to go through the training course, at least basic.  The key locations are in a little different place than the average FPS which is common when you have a game that allows for squad orders.  For example I am very used to hitting Z to go prone where it is the Alt button in this case.  You could remap to your usual comfort but that would mean remapping the command keys as well which might make things a bit messy.  Taking a couple runs through training helped develop the comfort pretty quick.

Once that is done, it is a solid multiplayer game with lots of maps that have very different environments to offer, as well as weapons and game mode unlocks.  Bots can be added to throw conditions off a bit or give you someone to attack with a human squad if you prefer killing bots.  You’ll find that different maps lend themselves to different weapons and if you have a weak commander you will be in pretty rough shape.  Rising Storm is visually stunning making for a very immersive experience.  I kept finding myself saying “I’ll play just one more round” until hours had passed and the day had long since turned to night.

Rising Storm isn’t trying to tell you the story of WWII or even reenact key battles of the war.  It is a hardcore first-person shooter concentrated on the best gameplay a game of its type can offer.  They give you community favorite weapons and have addressed issues such a spawn camping that previous FPS usually have a problem with.  The light mortar is a bit of a “derp gun” but, hey, what first person shooter would be complete without one?  Rising Storm is a beautiful way to pass the time blowing away the competition.