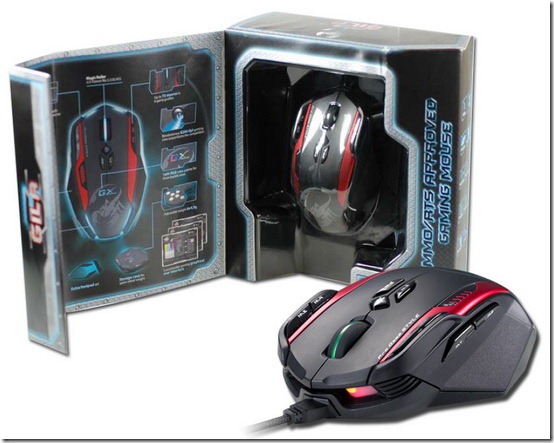 Our World of Warcraft guild is about to celebrate its six year anniversary and, as a result, just about every member who knows I do game and tech reviews wants to know about the latest gaming mice. So, as they come along into GamingShogun Headquarters, I volunteer quick to get the info to them.  I approach it from the point of view of function rather than style but sometimes, like in the case of the GX Gaming Gila MMO/RTS mouse, you can’t help but notice you have a glowing-eyed demon loaded with functionality in the palm of your hand. 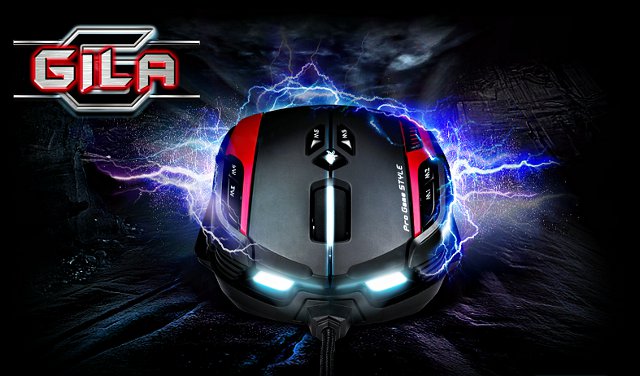 Gila is the next generation MMO/RTS professional gaming laser mouse for the GX gaming series from Genius.  Comfortable to use with either hand and step-up twelve buttons design, Gila can be customized to conquer any gaming challenge and improve combat performance.  Gila has a built-in over-clocking SG Core ii engine with a dpi range from 200 to 8200 so gamers can easily shift around in the battlefield.  A full speed MCU with 32KB built-in memory prevents macro settings from game block and gives gamers 1-ms (8X quicker) response time. The braided cable and gold-plated USB connector provide a stable and smooth signal connection during battle combat.

A reliable eight million life clicks give MMO/RTS gamers a comfortable button feel, and the adjustable weight design includes six metal weights – each 4.5 grams, customized to improve battle performance.  Gila not only allows the X/Y axis dpi to be independently adjustable, but it includes the “Angle Snapping” function that instantly raises cursor precision at high speeds, and the “Sniper” button that instantly reduces the dpi when you need it.  Gila uses the Scorpion user interface so gamers can setup “Button Assignment”, “Macro Management” for up to 72 keys, “Advanced Setting” to customize mouse performance and the “Light Option” that allows for customization of up to 16 million fascinating backlight colors.  MMO/RTS game oriented, comfortable design with a superb hand grip, and outstanding performance in all games, Gila is the choice of game fanatics everywhere.  Become a pro gamer now! 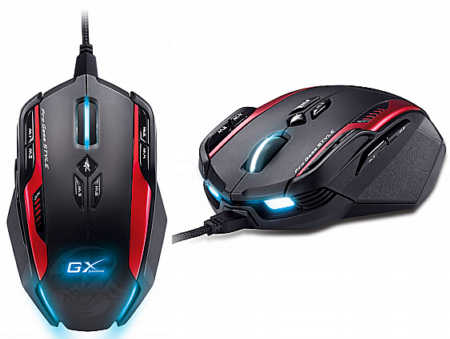 As soon as you plug this bad boy in, the front headlights start to glow and make this mouse look possessed.  This might seem accurate when you consider the fact that it basically has its own brain: A full MCU with 32k of memory and its own DPI overclocking engine.   These were no doubt the reason the GX Gaming Gila received the CES 2013 Innovations Award as well as a slew of other accolades from various sources.  This system enables the mouse to store control macros on-board and carry the settings from computer to computer, making your experience the same no matter what computer you are playing on.  It also enables slipping around macro blocking.  Macro blocking is a growing occurrence when a game recognizes short scripts of repetitive actions designed to speed up gameplay (macros) when they are originating from the keyboard or the system.  At this point, most detectors are not designed to detect them in a mouse CPU because mice usually don’t have them.  I imagine as a result of this step up in technology, and side stepping of game developer desires to stop macros, that eventually there will be patching and built-in programming to look for these. For now, you might be able to not only take your macros with you but avoid wearing out your hands with repetitive motions in some… for a while. 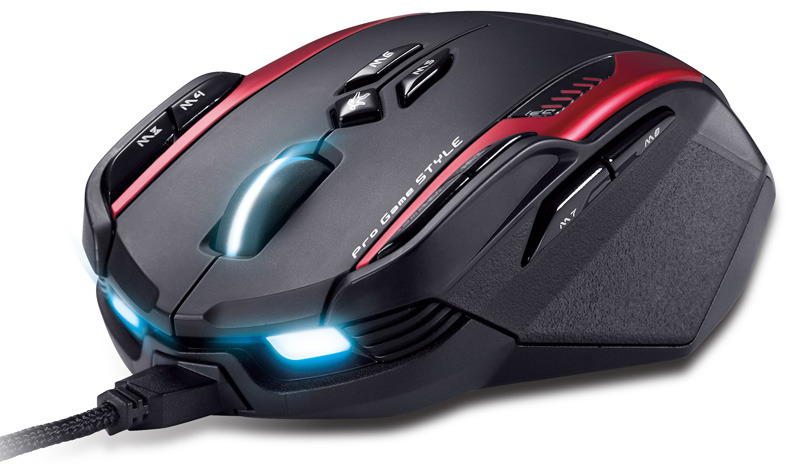 I won’t say which game I checked it out on to test this because I used it solely for testing purposes and not making it a common practice. But I can tell you if I had made a practice of it, my button mashing during that game would be insanely reduced and the life of my sexy mechanical keyboard would be greatly lengthened.  I think the real innovation of the Gila is its maintaining my gameplay experience, no matter which rig I am using it on.  When I am on “Fat Man” (our matching gaming desktop rigs are affectionately-known as “Fat Man” and “Little Boy” because they are the bomb), I usually have my rotation for my favorite MMO built into the keyboard macro buttons.  Then, when I get on the gaming laptop, “The Big Bad Wolf”, it doesn’t have any of the buttons so I have to work off my memorized rotation and powers that be help me if I am on “Little Red”, our travel laptop, with its tiny keyboard and I try to do a key rotation with my gigantic fingers.  With the GX Gaming Gila MMO/RTS gaming mouse, all these playing fields will become equal and I will play the game as the pros who play it do, through programmed mouse buttons.  GX Gaming has its own “Scorpion” program interface to build all your macros through the computer that is excellent and user friendly. It saves all the information on the mouse where it can be called up later.  The hardest thing you’ll have to do is memorize which of the buttons you programmed to do what.  The program also allows you to program the colors of the mouse lights with 16 million options.  Personally, I was happy with red for the glowing front “eyes” and green for the others. That may seem dull to some but I don’t know what color you would call the red and green, maybe it was blood and seaweed, that sounds fancier.

Overclocking the mouse is as easy as hitting a single button and deciding what level you want it at.  There is an indicator right there on the mouse as well as one that pops up on your computer screen so you know so easily that it is almost idiot proof (I have been around long enough to know that nothing is truly idiot proof) and it can’t get more on the fly than that.

Just in case this customization of your programs and mouse weren’t enough, there are also weights and drag strips you can put on the mouse to adjust the drag and weight to your liking with a nice carrying case for the unused weights included. 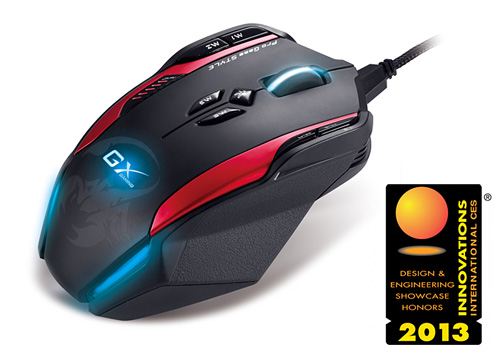 There is a reason CES 2013 gave this mouse its Innovations award, this is the next step in the evolution of the mouse and is a step beyond not just other mice but the games you play them on.  This will make your gaming experience easier, smoother, and more universal than ever before just by having the Gila attached to your computer.  I highly recommend picking up the Gila MMO/RTS gaming mouse, it will improve your game in some cases more than they want you to.

You can find out more regarding this mouse at the product’s official website.