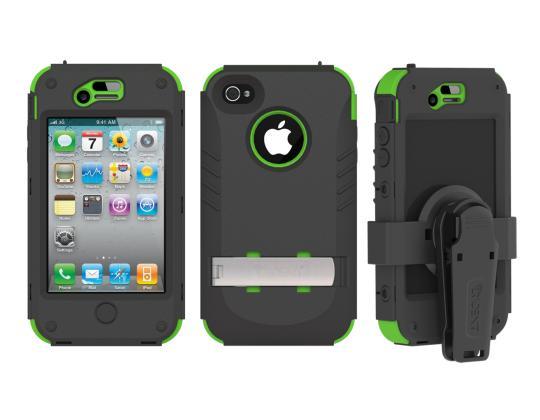 Last night I was standing in a gravel parking lot with a bunch of friends and pretended to fumble my cell phone and caused it to fly up in the air, smack hard onto the gravel and go skidding across it.  One of my buddies actually yelled in horror and surprise as he went diving after it and saw it land so roughly.  He picked it up, looked at it and said “Aw damn!  It is one of THOSE cases.”  He looked it over until he saw the Trident logo, checked and found no scratches then laughed and handed it over.  He was one of just several people that night to look at the case, feel it and say “this is that case that they have all the videos of, right?”  If you don’t know what I am talking about or what they are referring here’s an example:

Yep it is that case set.  The Trident Kraken AMS system actually is a combination of three pieces, the Perseus rubber case and two pieces of the Kraken exoskeleton that can be actually used as the Perseus by itself, the Kraken front protector section of the exoskeleton and the entire thing put together. 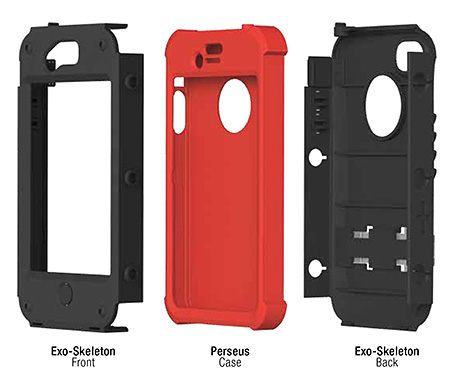 The different levels of protection really come down to different levels of style because the Perseus by itself isn’t very protective, it gets a bit better with the Kraken front but it is when you add the back that it becomes an insanely tough case.  I didn’t feel comfortable doing much in the way of toughness tests until all three pieces were together at which point I bounced it off walls, dropped it in gravel lots, tossed it in the air to watch it hit the hard ground, all kinds of things that should have kicked in my Apple Care Plan and had me vaguely describing to a person with an apple on their shirt what happened without adding detail.  No video documentation was taken of these tests because it would probably cancel any warranty ever and I can’t afford to fork out money for a new phone if the protection had failed, which it didn’t.  Nobody saw anything, understand?  Nobody read this, you get me?

I found myself using the little stand on the back all the time, at dinner I set it up on the table so I can see any incoming texts or calls without picking it up or taking my attention away from others and when waiting in the car for someone to run an errand or getting ready to call it a night I prop it up, start Netflix and watch a movie.  It’s handy when at the computer like right now just having it propped between the keyboard and the screen to glance down at when a message comes in.

The hip clip took a bit of getting used to since it has one spot to clip into but once you get it down having the phone on your hip and not having to dig it out of your pocket every time something comes in on it.  Just pop it off the clip, take a look and then snap it right back on and away you go.  If your significant other says it looks a bit geeky or techie, like mine did, embrace it I say!  Or wear a long shirt and it will cover it up while keeping it handy.  It has been jogging and hiking tested to stay in the clip on your hip while moving around and if it does drop no worries if you are using the full Kraken AMS setup.

The folks at Trident also sent me a bike mount for the back of phone that actually locks into the casing making it not so much an attachment as just another addition to the system.  At first thought a bike mount may not seem like the most useful thing but I was surprised how many places I found to use it since it basically is a small C clamp as well as a bracket.  I have an iPad holder for the windshield of my car and found multiple ways to attach my phone to it in case I don’t want to take my iPad but still want to be able to map where I am going or using it hands free to listen to music.  I also have a BlueAnt Ribbon bluetooth connection so I can have the phone mounted up on the dash and use the stereo as a hands free calling system.  The bracket is remarkably versatile. 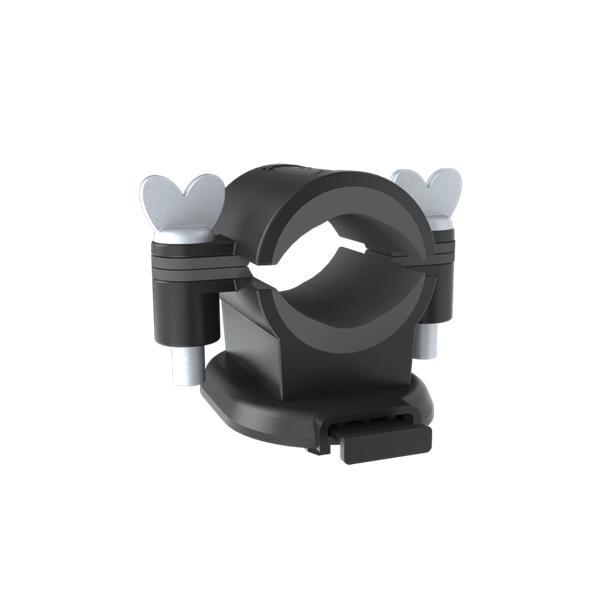 To be honest it was easier and more comfortable figuring out ways to mount the phone knowing that if I dropped it or if for some reason it didn’t stay clipped down then it would survive a fall without a scratch on the case probably.  I’m most excited to see what I can do with the clip when October rolls around and I find myself wanting to get video from attractions all over Southern California.  I will definitely have to give another shout out to this case and it’s bracket when I figure out new ways to safely capture video with my phone. 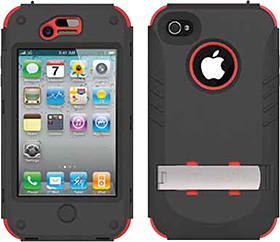 This case looks good and gives me a sense of security I have never felt with my cell phone.  I have never comfortably tossed it up in the air and let it bounce across a gravel lot.  Gravel hurts, badly, but didn’t even put a scratch on the case.  If I ever start to doubt the protection it provides I can watch the videos, I think I will pass on running over it with my car though it is a compact so probably would do even less damage to the case.  Actually I will probably just watch the videos some more for the heck of it right after I am done writing this.