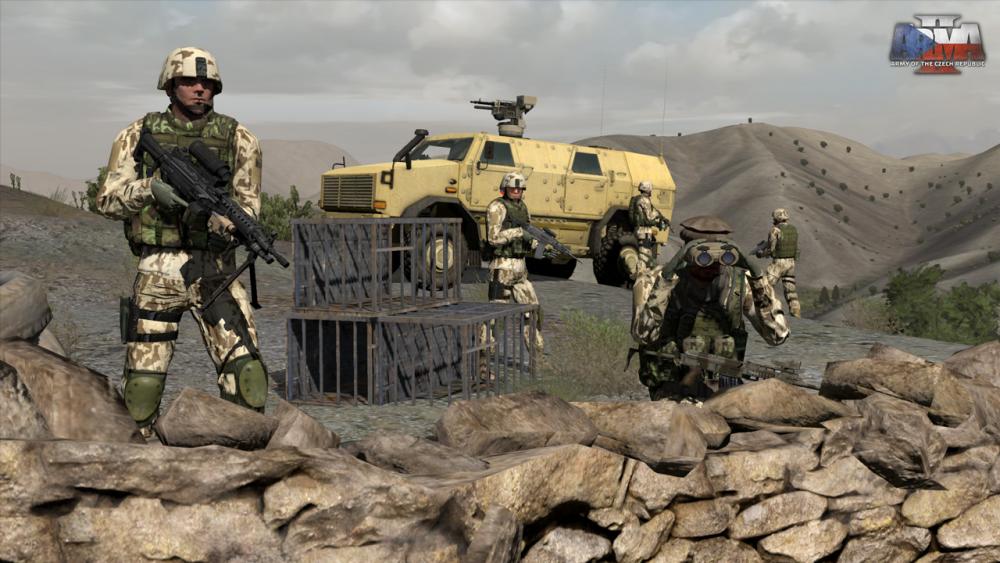 In a world of FPS there are certain franchises which deliver excellent gameplay but due to the big boys never get the light of press.  Everyone has heard of CoD and Battlefield but there has been another very active franchise which has been pulling in enough of a following to keep the DLCs and sequels coming out and has recently hit the spotlight with their zombie mod DayZ which is being further developed.  ArmA ,from the Latin word for weapons (not the often mistaken belief that it is for Armed Assault the first game), has been around since 2006 when it was first developed by Bohemia Interactive whose big standout wound up being the Flashpoint series stateside but boomed decently with both titles in Europe.  There the ArmA series thrived and grew with their third ArmA title on the way, an extremely well received expansion to the second game called Combined Operations and DLCs based off of it.  It is one of these that Bohemia recently released, Army of the Czech Republic, that shows just because they have ArmA III and DayZ in development doesn’t mean they have given up on their previous title. Civil War is just coming to an end in the fictional Bystrica and members of the Army of the Czech Republic are sent in to help bring the peace and round up war criminals.  Things turn out to be a bit more complicated than at first thought as the game develops into a 15 mission storyline over two fictional territories.  You will have state of the art equipment to help you in this fight but wits and strategy win the day in every scenario because your elite team is outnumbered at every turn. The graphics in this game are excellent though objects in the distance lose definition which is probably intentional.  An enemy standing still in camouflage among the trees for example blends in as they well should, and if you are advancing through foliage or in the middle of the road the enemy is going to spot you first, possibly while a canopy is still in your way.  While this may prove frustrating it is accurate and up close the graphics show very nice and clean definition.  The real gem of atmosphere is the sound though which is amazing realistic.  I left the game for a moment to get a snack and came back and froze in the middle of my living room.  It sounded just like my grandfather’s house out in the middle of nowhere in Southern Oregon.  Crickets were chirping but it was more than just that, they perfectly captured the sound of nature being nature.  It is almost hard to explain, like explaining the sound of nothing but that was it.  When you move your sounds are accurate whether on roads or in brush and the gunshots are perfect as well but what really left it’s greatest impression was capturing the sound of isolated nature. The first thing you will discover with this series, and the Flashpoint games as well to a lesser extent, is that they are not trying to be another CoD or Battlefield clone.  You can say sure, whatever, but until you play the training missions for ArmA you really have no idea how unique the game is when it comes to controls.  Any person raised on American FPS controls will be immediately at a loss on how to do most things in this game.  ACR is terrific but not a jumping in point.  I believe there is a legitimate reason this is an expansion: the gameplay expects you to know this foreign control system.  Here were some actual moments that happened when I tried to jump directly into ACR.  I was stuck in a car unable to open the door while the enemy surrounded it and shot it up like the Bonnie and Clyde car (look it up if you have never seen it).  I couldn’t change weapons when I ran out of ammunition so I stood there with an empty gun and got shot up.  One of my men was shot to the point of near death, I was looking into his bullet holes and our medic just stood there checking the perimeter.  Unable to use my sniper scope I stared uselessly at a forest as a sniper picked off my team one by one.  These are just a few issues I found, the list went on until I went back and did the training and took a very long look at the controls section.  ArmA didn’t go with some industry standard, they blazed their own trail in many ways and if you want to play it you need to embrace that.  This game is so foreign that in ACR they don’t speak English, if you want to know what is being said you have to read the subtitles. ArmA, and ACR in particular, doesn’t try to put in a bunch of cinematics or trails you have to follow, actually in most cases it is the opposite. If you find your own way, the often longer way to a location, you have a better strategic advantage.  This game is all about the strategic advantage.  Heading straight for an enemy from a road is the direction they expect you.  Sneaking up wide and approaching from the side opposite the road is much more likey to take them by surprise.  If you are on the high ground ducking can keep you from taking bullets while the enemy on the low ground has less defensible cover.  These are real life standard tactics that are often lost in games so it is nice to see that most of the gameplay is realistic in that sense.  Much like the real world this is a sandbox environment with many, many ways to get a job done and your most valuable weapon is your brain, though if you like other types of weapons this game adds all the latest weapons, vehicles and aircraft you could want and allows you to use them in mission or just having fun mode. I mentioned above that there was the moment when I was standing there next to my wounded comrade while my medic stood around checking out the scenery.  This was frustrating as I managed to get the medic to try to heal me but couldn’t get him to heal the guy full of gaping wounds.  My first thought is this is a major drawback to the game, I want my medic healing the team.  When I think about it if we are under fire I would want my medic to do what I choose, return fire or heal the teammate depending on what I felt was the priority.  So in that case I felt that the medic should only heal when I say so.  But when the firing stops and we are regrouped I honestly felt the medic should heal the injured team member.  Once I got the hang of issuing the order it just became a part of every post engagement assessment but at the same time it felt like telling a toddler he could go potty now.  Maybe this is something that will be addressed in ArmA III. ArmA II: Army of the Czech Republic is an excellent DLC on an excellent game.  It requires a learning curve which if you have the patience for you are rewarded with hours and hours of great and challenging gameplay.  My guess is that DayZ probably will have the same system so if you want to play one of the hottest zombie FPS properties around when it is fully fleshed out you may want to pick these games up for that alone, while others are stumbling around getting devoured trying to figure out the gameplay you will be boomsticking your way to Groovyville.  If however you just want to play an extremely well built military FPS you can’t go wrong with this franchise and this DLC in particular.