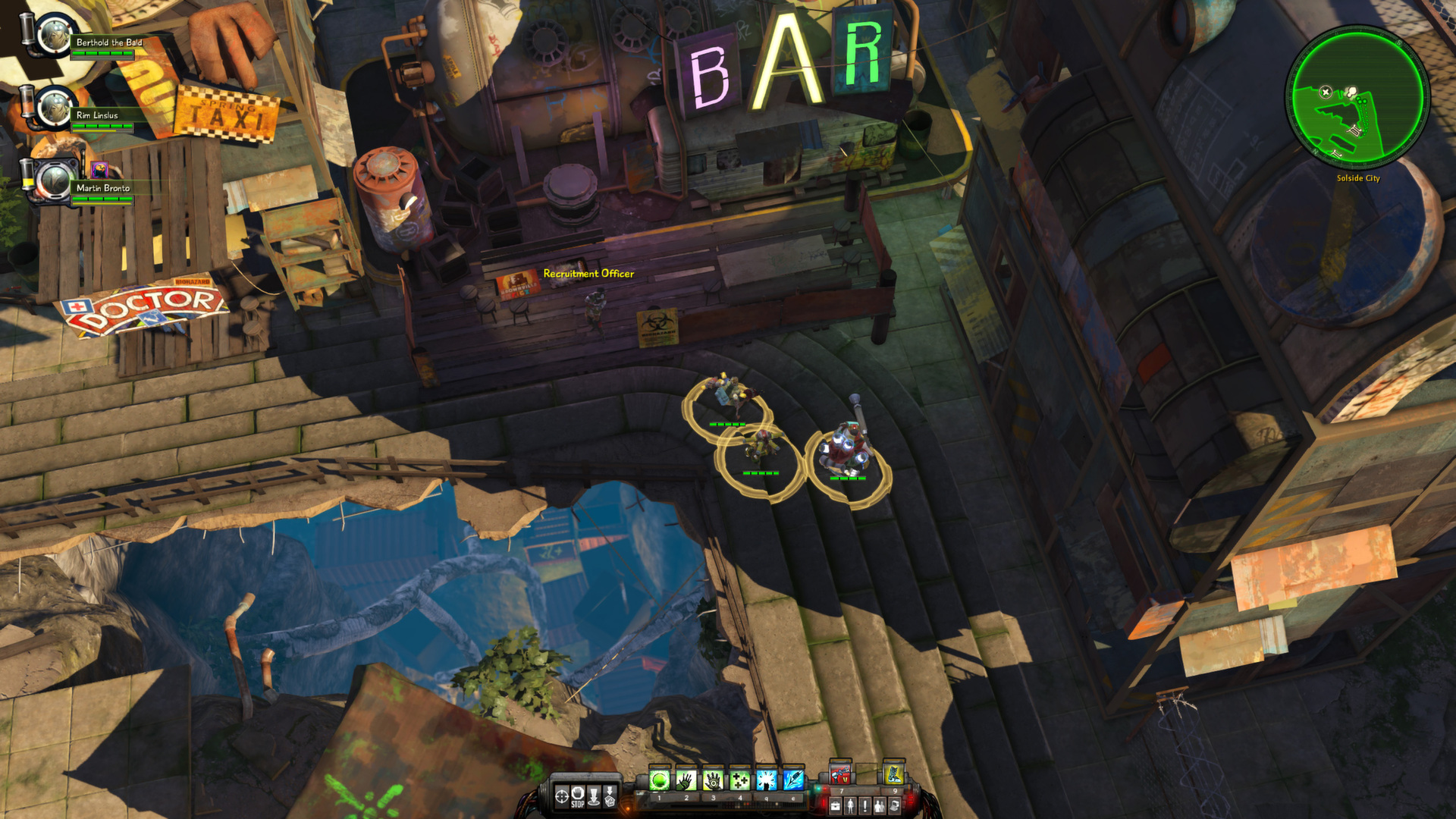 Krater: Shadows Over Solside is a game I have sat down to review several times now – each time playing it some more, restarting it and taking a break and playing other games then coming back to repeat the cycle.  The temptation to describe the game in one simplified sentence is very high but, at the same time, doesn’t do the game near the justice it deserves.  So, I will begin with a very simplified statement and then explain why it isn’t so simple. 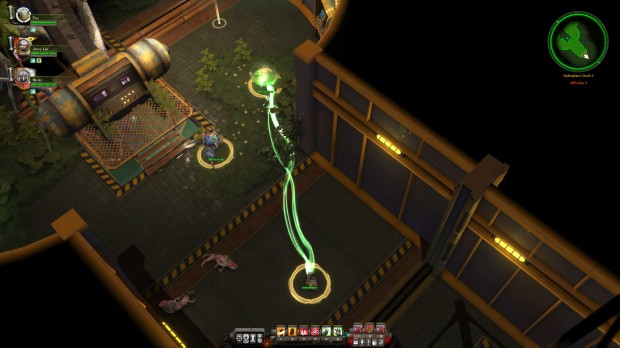 At its surface, it is a top down RTS RPG with almost identical controls to D3 that is themed in a post-apocalyptic Sweden where survivors scrape together what the can from the old world in eccentric designs presented in concept art design just like in Borderlands.  If you just watch the trailers or play a quick demo this may seem like that all there is to this game and, to be honest, I LOVE both of those games. I have spent immense numbers of hours in them and would welcome a game that combined the two.  This game does so much more than that though so I am going to break it down into features. 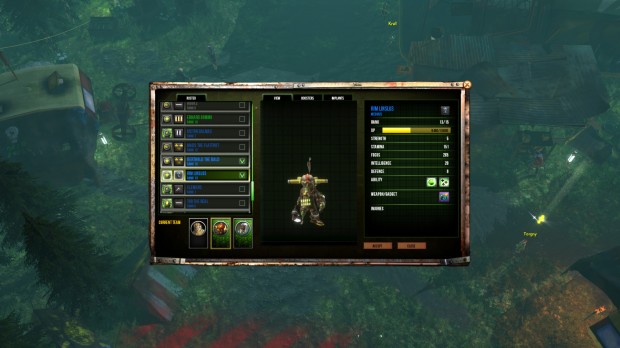 Crafting in this game includes not only weapons but implants to body parts that add not just to stats but also abilities.  You can craft just about everything you need for this game and the few things you can’t can be bought, such as new units for your group.  The result is an extremely customizable experience in the game nearly from the start so that your really feel like you are creating the game as you go.  In many ways you are – there are few restrictions put on movement and most quests don’t required a linear path.  A good example of this is when I left a town and went to a location following a certain path.  The path was set with random seeding just like Diablo 3 so that when I played it again later I had an entirely different experience and, by choosing this path, I completely missed an interaction which would have solved a quest for me and given me a new one.  I was also given an item intended to be passed on to another individual and didn’t do it.  The result was that I didn’t get the experience or reward for the quest’s completion instead I just had something sitting in my inventory I could sell if I want.  So, in some ways, it is a very open world and not set on quest-rails. Also, Fatshark has promised to have weekly updates, adding new elements long-after release and this is actually considered the first of a three part story that will be revealed to us over the next couple years. 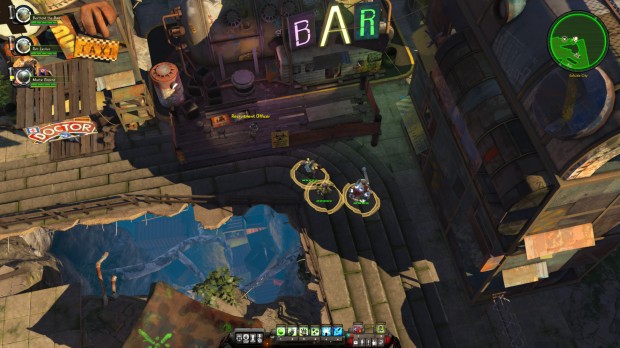 The graphics look very much like Borderlands, which is a very distinct style, and looks in many respects identical to the concept artwork used in creating most games.  One of the few things I would say is different is that this game uses color and shadows everywhere, the same amount of detail given to a wall that is 6 inches on the screen in Borderlands is given to one that is only 1/2 that in Krater.  The result is amazing contrast and detail that unless you have a strong system and a good monitor might be lost on a player.  Cutscenes are much more like Borderlands since they are at ground level but gameplay is so detailed you need a strong system to due it justice and in some cases just to play it.  It does bring up the question of whether or not developers should have pushed the envelope of graphics so that not everyone can play it but it makes it so that those who have nicer systems definitely feel like they are getting their money’s worth out of their rig. 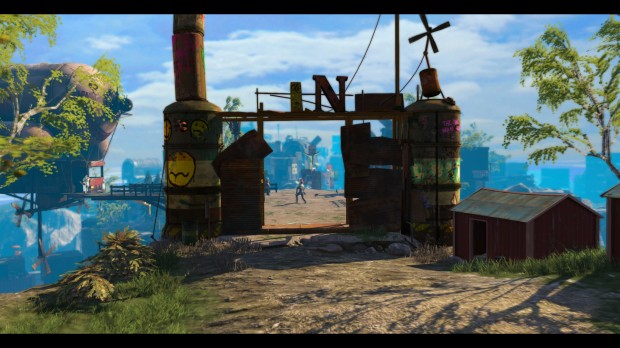 In most of these dungeon crawler games you control your lead character and your other party members do their thing at the same time such as mercenaries in Diablo 3.  In this game though you control a party of three consisting of four possible classes and all characters in your party are replaceable.  You basically have a tank, a healer, a ranged dps and a melee dps to choose from to create your parties but your control over the characters doesn’t end there, you also work the talents of each member of your party at the same time!  You have six buttons at the bottom of your screen for combat, two each for the classes you choose.  So for your tank to do taunt you have to select the skill that does that, then hit the healer’s buttons choosing the type of heal you want and hit your ranged dps or melee’s special attacks.  They are standard key-bound to 1-6 which means on my Razer Naga Expert MMO gaming mouse they are assigned to six thumb buttons so just like D3 can be played entirely with the mouse.  It takes a bit of getting used to doing the tank attacks, melee specials then healing your party so no one falls because falling is another unusual aspect of this game. 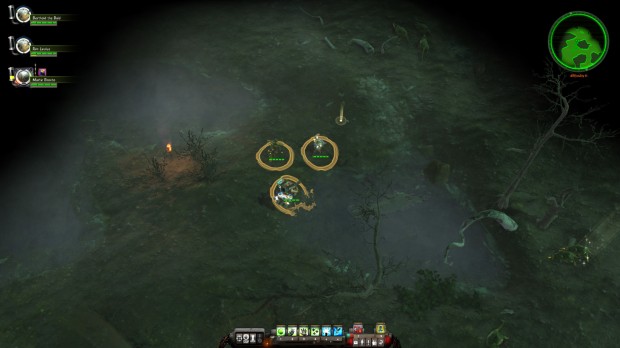 So one of your party gets his rear beat down, it definitely happens when you are getting used to the game.  If it happens too often in this game the character takes permanent damage.  After a few knockdowns one of the character’s arm might get crushed and it will have permanent 20% drop in strength.  If it gets knocked down a few more times it might get a leg permanently mutilated lowering the character’s stamina.  If the character takes too much permanent damage it simply drops dead and you have to get a new member for you team.  Depending on how bad the damage is you might be able to use weapons or implants to balance the character’s damage or you might just replace them.  Replacing them though brings a new member to the team and the more time a member experiences with a team the better they work as part of the team!  So experience and injury can be permanent on a character and effect the team as a whole.  Also just like weapons and implants their are varying colors of strength and rarity to the mercenaries so some might not be such an upgrade in the short run but after maturity will be far superior. 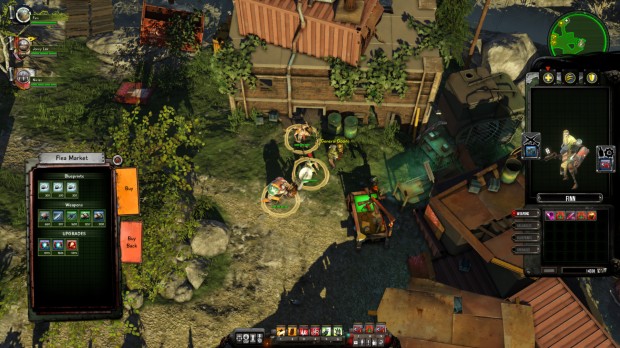 Game Over Man, Game Over?:

The game is designed to actually have no end, much like many other games it is designed with end game play that should provide countless hours of struggling deeper underground into the mineshaft.  Also this game is never the same twice due to seeding so if you get bored with end game you can restart it, build your team differently, take different paths and basically play a whole new game with whole new characters. 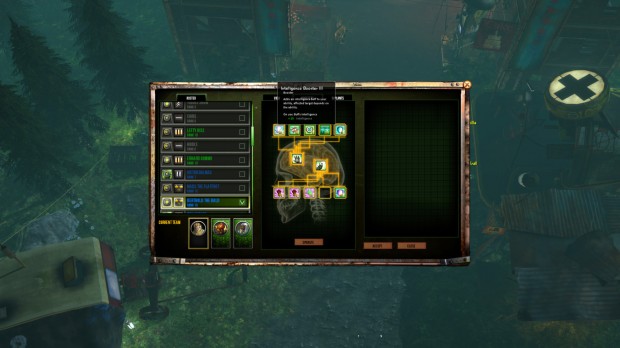 Another way the game keeps going is the planned implementation of multiplayer.  At release there is a button on the front page for multiplayer but for now it is only offline.  The nice thing is that when multiplayer starts up you can use your same characters online and any advancement of your characters online or offline accumulate together and count toward each other. 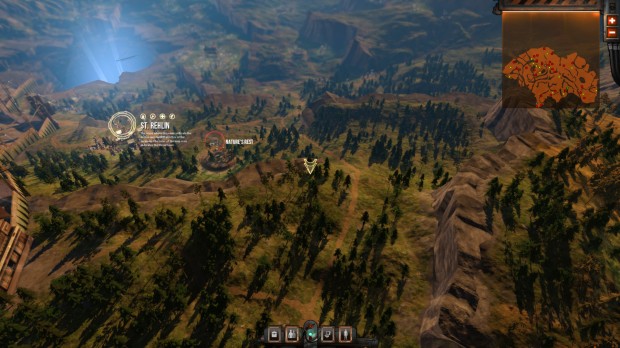 Krater is a game that plays a bit like Diablo 3 with theming just like Borderlands but has excellent depth that is all it’s own.  The game is constantly evolving now and the plans are for that to continue.  Playing it week by week and with different team setup and character builds should make it a different game every time.  Seeding makes it so that even if you take the same path each time it should always be different with different random rewards resulting in different builds.  All this on Steam so no server subscriptions and the price is an insanely affordable $14.99 for the core game or $19.99 for the game, soundtrack and Dr. Cerebro Pack (first DLC).  If you still aren’t convinced here is a gameplay video and a cutscene music video.