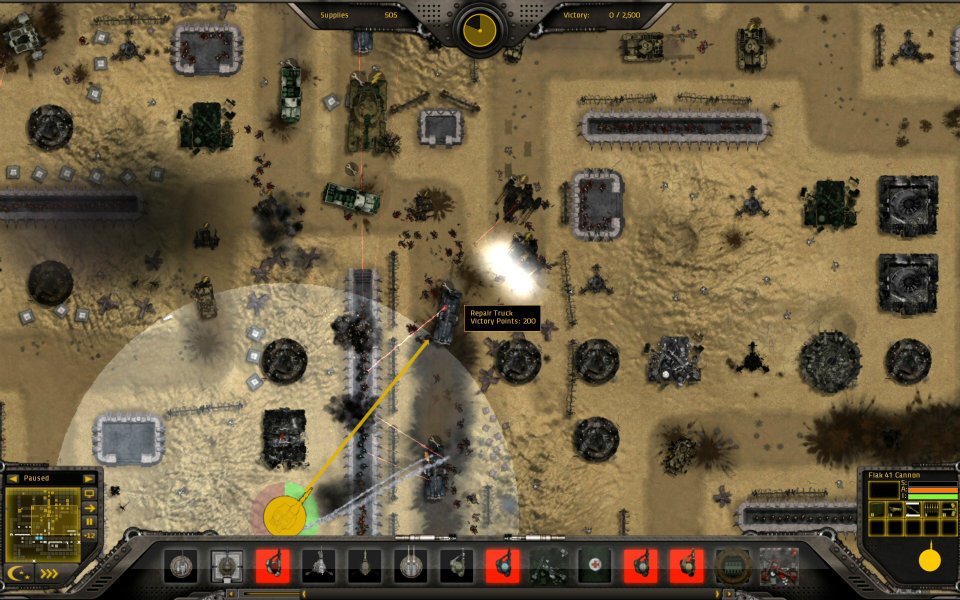 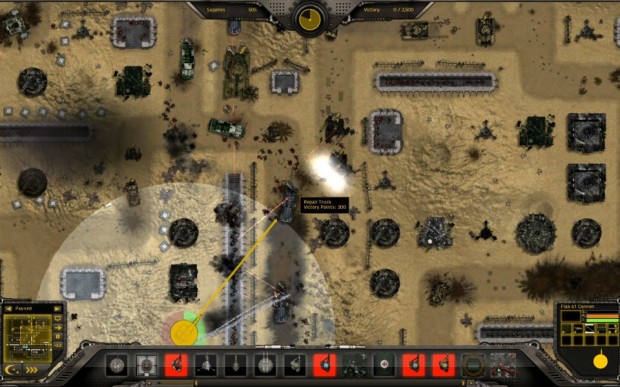 God Save The King!  He is over 200 years old!  Ok, ok, I am sure it is a different king but the same World War I has been raging for two centuries in this alternate universe.  Apparently technology has advanced but mankind is still hanging on to the same war and all roads are lined with turrets and soldiers.  The storyline doesn’t run heavily through the game, mostly in the briefings before missions but it is kind of interesting that you are leading a 200 year old fight and the player’s guide is called “King George’s Army Warfare Manual Version 2,415c” and written in a distinctly British manner.  If you pick up the game I highly recommend you read it even if you feel comfortable with the gameplay because it is so filled with humor it makes for a terrific read. 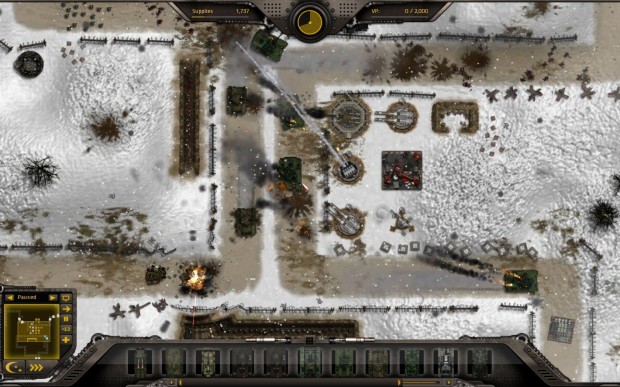 The game is a 2D tower defense which has a fairly standard setup but very unique variety of units that alone brings on gameplay addiction.  Because it is the same war for over 200 years they have kept the weapons that work right and created new ones using the new technology.  As a result there are tanks and turrets straight out of WWI and then there are laser weaponary and mechs as well making for some interesting decisions as to whether the tried and true or the fancy and new weapons are the best for the particular terrain, placement locations and enemy forces involved.  The game also allows something most games of this type don’t in that you can choose to be either the attacker or defender each time you play a map and you can play maps multiple times.  So instead of getting just one try at any map you get two and hopefully you have success at one or the other to unlock the next map or two.  If you lose a map you get a consolation upgrade, if you win you get to pick between two better upgrades.  Either way though the enemies on that map and any map get more difficult so you want to make sure you aren’t trying to pad yourself so much on the lower maps that the higher maps become near impossible but at the same time you don’t want to move up maps too fast when you aren’t upgraded enough.  It is truly a game of balances all the way around and I was really tempted to label it a strategy game rather than a tower defense because it has just as much strategy as say a game like StarCraft II just without the building of bases.  Also much like StarCraft and other strategy games there are medals you can unlock and achievements to unlock on your Steam account in case you crave prestige as much as you do victory. 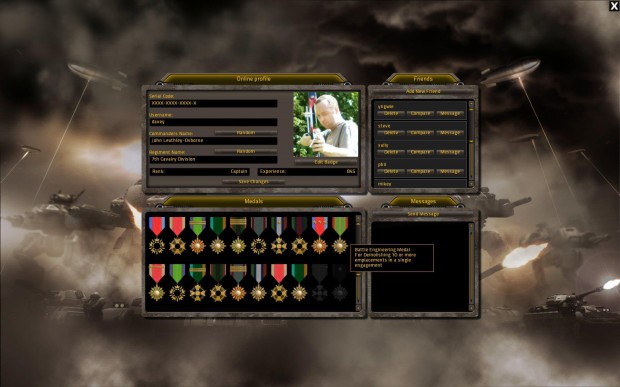 I found myself choosing to have tanks escortings mechs on attacks and giant WWI turret cannons being defended by lasers on defense with soldiers also playing a key role in both defense and offense and may make the difference in holding or breaking lines of defense.  Individual units can be given target instructions throughout the engagement but it is important to know that once an attacker’s vehicle starts rolling down a certain path there is no stopping it.  Also if the speed of the game is moving too slow or too fast for your taste that too can be adjusted.  It all comes down to personal style and strategic planning so what seems like a simple tower defense game involves much more thought than many strategy games and has proven at to me to be more addictive. 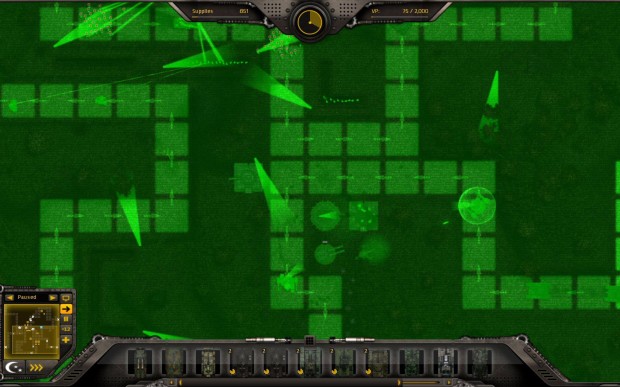 The sound in the game is excellent and the graphics are terrific and far better than many games of the same genre.  They even have an infrared mode for the night fighting which looks great and is a blast to use.  Watching the mechs walking, the shells exploding or the lasers firing becomes so much fun that I on occasion sped up and slowed down play to watch the action, I tried to be watching in slow motion during most unit explosions for the thrill of it.  I also played with firecrackers as a kid. 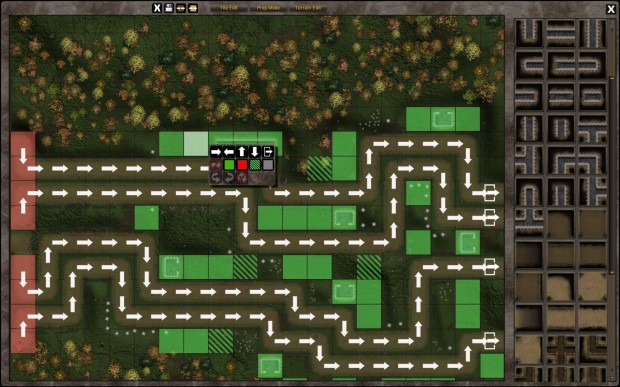 I know plenty of people who would want the game for this element alone.  You can custom design your own maps then upload them to the community so that other players can try beating them.  Since there is no multiplayer I think of this as a very nice consolation since seeing people enjoy a map you designed can be just as satisfying as beating them up, especially if the map beats them up for you.  It is a straight forward grid system but that works just fine if you have a creative and strategic mind, let’s face it some of the maps in the game are devilish enough that I fall just short of calling it’s designer “evil.”  I did on occasion get completely choked to death at choke points.

Just in case you missed the above there is no multiplayer, though the game’s design lends itself so much to one that maybe a patch, DLC or sequel may include one.  Personally I am satisfied with building the maps to kick arses. 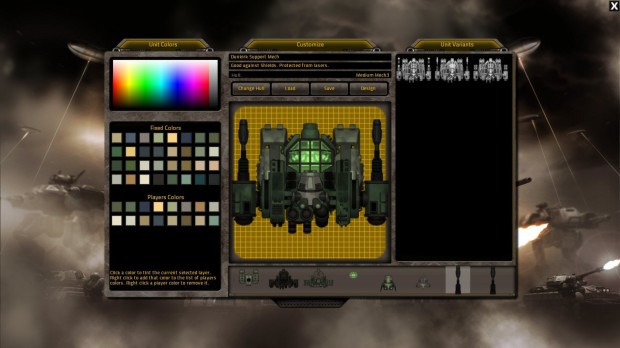 This game has a really fun story premise, great maps, terrific unit selection and a very nice look to it.  Throw in a map editor and I think it is actually selling the game short calling it a tower defense and think it should be under the category of strategy, for most of the maps and challenges take a strategic mind.  To prove this on some maps I just tried throwing just anything wildly at the enemy while attacking or defending and found without the right choices the battles turn out disastrous.  If a map is not designed well by yourself the community will tear it apart right along with your reputation.  If you like strategy games or “the thinking man’s 2D tower defense” then this is definitely a game for you.  It is only $20 on Steam and the number of maps you get is limited only by the community.  Cheers Positech, excellent game.