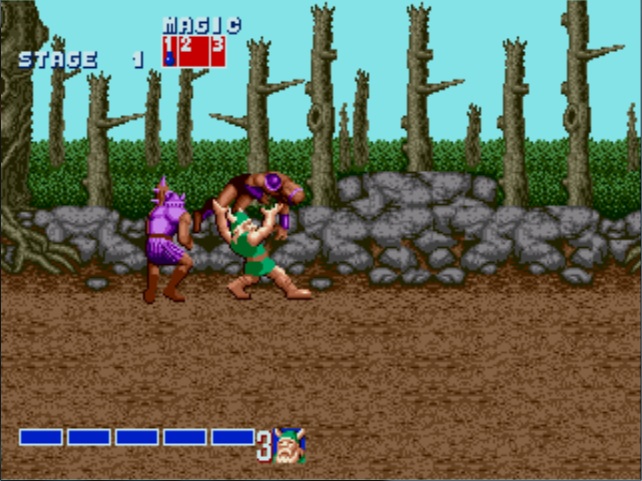 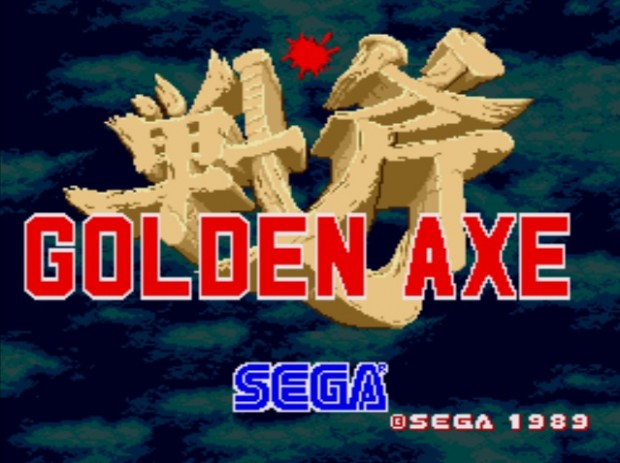 There was once a time when the hub of social activity was the video arcade, where loud games noises and Journey music bombarded you while you played your favorite game and flirted with the big haired blonde next to you.  Quarters lined the edge of the playing screen or pinball table as people used them to hold their spots in line for the next game while they watched the current players trying to pick up new tricks and tips.  One of the shining beacons in these arcades was a game called Golden Axe where you got to choose from three characters and hack and slash your way through a wonderful barbaric environment where the only thing faster than the action was how fast the game ate your quarters.  Everyone had a favorite character to play and the lines were always long.  As consoles slowly killed the video arcade, Golden Axe going to the Genesis was definitely one of the coffin nails in the dying social scene.  I can play at home with my best friend as long as I want and only pay one price?  Yes please! 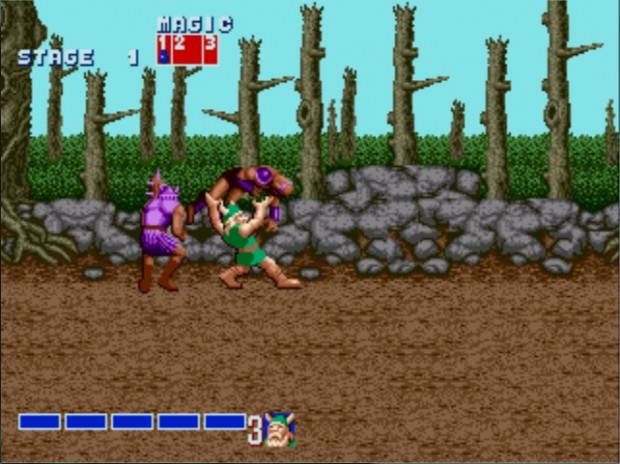 As a result the arcades slowly died off becoming occasional sites and novelties but the Genesis became so much stronger with the release of Golden Axe that Golden Axe II came out on the system before it went to the arcade.  It was the beginning of the console era, a time which is still going strong with it’s only competition being PC games.  It is on the PC and MicroConsole that OnLive has brought back this great gaming classic for a hack and slash trip down memory lane. 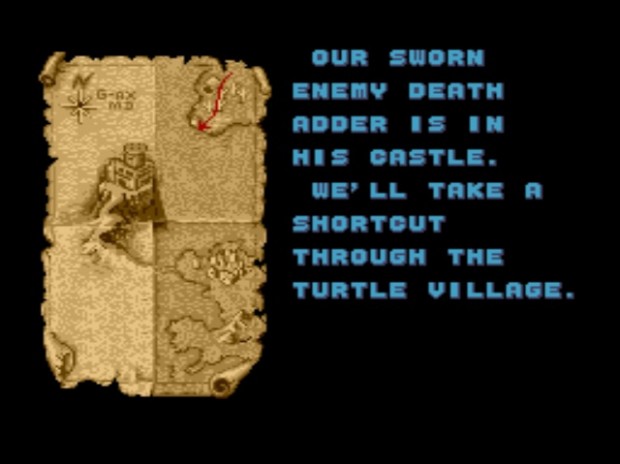 The storyline for the game is a pretty straight forward fantasy one: Death Adder has taken the royal family and the magic symbol of the land Golden Axe hostage and threatens to destroy them all if the people do not bend to his rule.  Three adventurers: a warrior, an amazon and a barbarian set off together to free the kingdom of Yuria from the grip of Death Adder.  On the way they must defeat the many minions of Death Adder and use all their fighting skills to survive.  The storyline is mostly told through cut-screens but the game does try to infuse the story where it can.  To most though it is their favorite adventurer they remember instead of Death Adder and his schemes.  It was a hack and slash and most people remember the hacking characters far more. 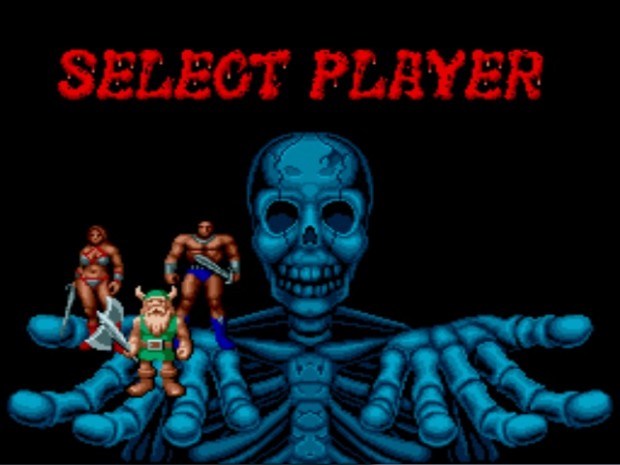 Gameplay was standard for the Sega Genesis with three buttons and directionals which is the same setup whether you use the keyboard or an OnLive controller (microconsole or PC).  One button is dedicated to the magic potion attacks which are stronger with the more potions you gather throughout the game.  Each adventurer has their own special attack that they do with the potions, my favorite was the dwarf barbarian who caused lightning to strike everywhere on the screen.  The other two buttons were dedicated to attack and jump which could be used in combination to make a jumping attack or a special character combo if the buttons are hit at the same time.  For example if you hit the jump and attack on the barbarian he did a rolling attack.  There is also the occasional creature you can ride for attacks, one of which is a Cockatrice which came right out of Altered Beast where it was an enemy (both games were made by the same company).  For the most part though you hack and slash, when the enemies get tough or too thick in numbers you use your magic potion attacks to thin them out.  Another use for the potion is if a bunch of enemies take you down, when you revive you can use a potion to knock them all down and give you a chance to regroup and reposition on the screen.  Though it is a hack and slash there is some strategy involved such as high ground and potion use for the most part you are hitting the attack button like a madman with a big grin on your face. 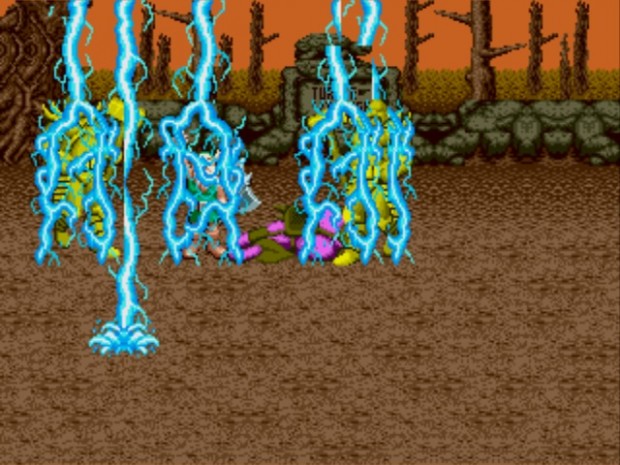 The graphics and sound of the game are terrific and definitely bring the feeling of the old arcade/console play.  They are probably even a little better than some of the same time because they use the same enemies over and over with just different color outfits.  You have minions with maces and clubs, skeletons and knights but they all look the same which enabled them to make the action fast and the graphics quality better.  I know that back in the day it didn’t seem like that much of an issue, I had actually forgotten about it until I started playing it again for this review.  At the time you would say “uh-oh!  here come the gold ones!” and think how nice the graphics looked as you hacked away.  It seemed like a good tradeoff then and really didn’t bother me that much now because I think of the time the game was made. 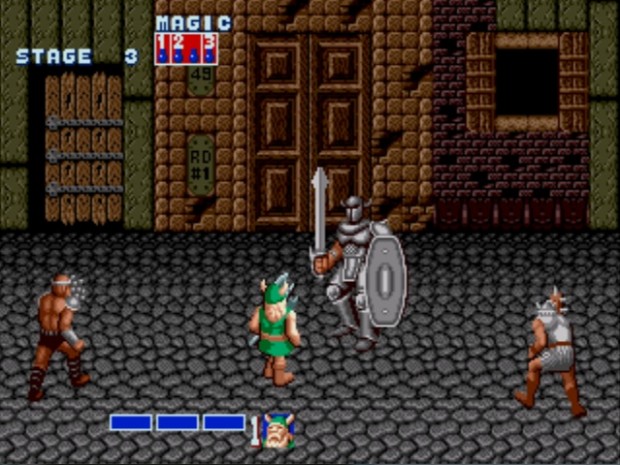 I got so into Golden Axe that I was almost late for an appointment because I was hacking away and not watching the clock.  The game is a great representative of it’s time and for people who lived through it is probably dripping with nostalgia that still holds up as a good play to this day.  It is also part of OnLive’s 200+ PlayPack this is only $9.99 a month which wouldn’t have lasted you an hour in the arcades back then or bought you the cartridge.  If you still aren’t sure you can go to http://www.onlive.com/promote where you can demo just about every OnLive game they have and see if the $10 PlayPack is a good investment to you.  Make sure to catch OnLive at booth 535 at E3 2012, it shouldn’t be hard to find they have a terrific interactive booth.  Pick up some swag for me!