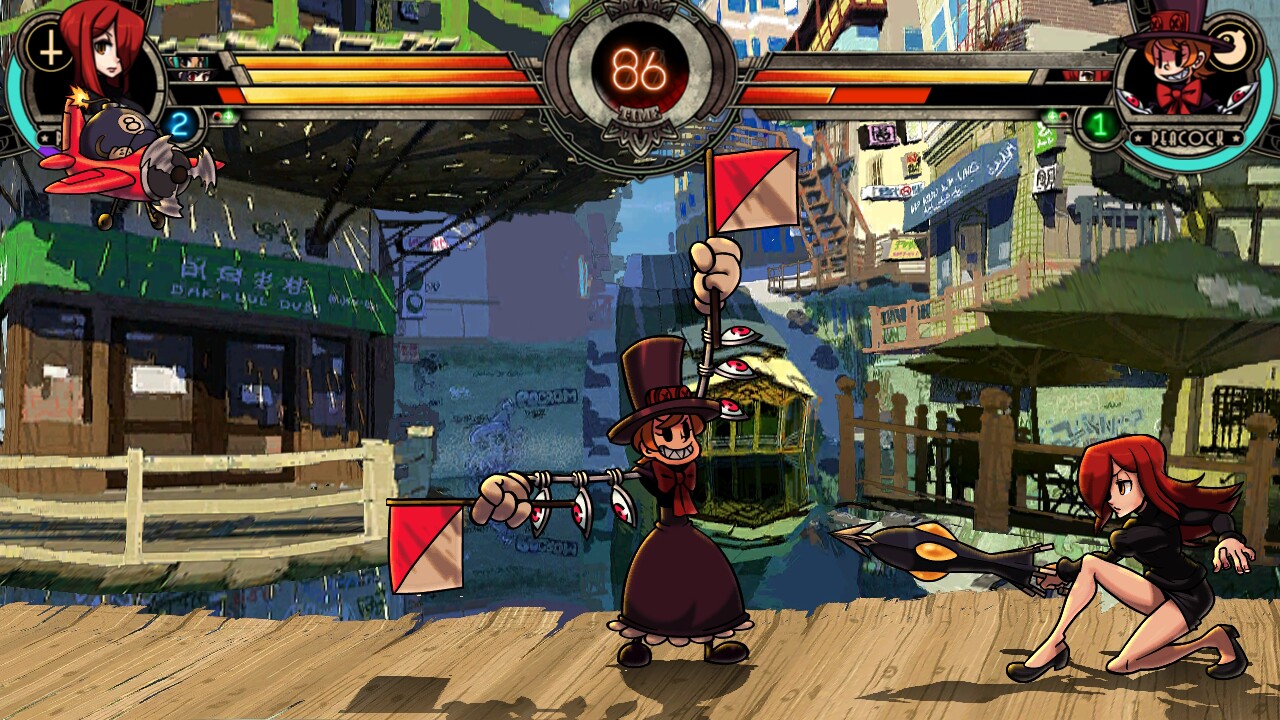 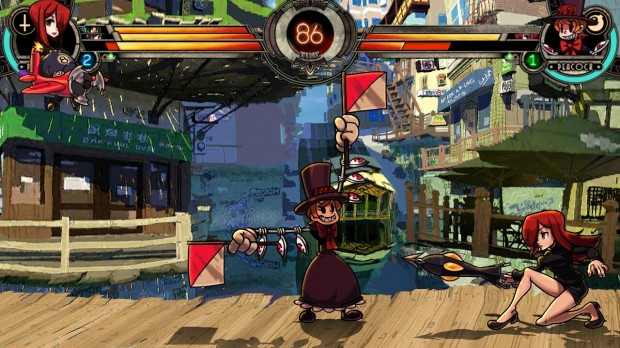 With this last generation of fighting games, developers have stepped away from the three dimensional arena and game play style and headed back to the world of two dimensions.  Fighting game veterans, like Street Fighter, Mortal Kombat and the Marvel vs. Capcom series, have all reverted to the good ole days of the 2D fighter.  Since the fans have shown a renewed interest in this old 2D fighting style, Reverge Labs have released Skullgirls to contend with the big boys.  While Skullgirls does lack some serious options and even a move list in game, it makes up for it by being a gorgeous fighting game that is well balanced and just downright fun to play.  Skullgirls may not be a perfect 2D fighting game, but it is a massive step in the right direction for Reverge Labs.

Skullgirls is set in a world that has been decorated by Andrew Ryan and populated by anime characters straight from Japan.  Within this world is a relic called the Skull Heart that will grant a woman any wish her heart desires.  The trick is that the wish must be selfless and pure, otherwise the woman will turn into the Skullgirl and become a slave to the Skull Heart.  Eight women are now connected to the fate of the Skull Heart and are battling to have their will to be the one that comes out on top.

The story does the job by putting the game into some sort of narrative, instead of just a string of senseless bouts.  What makes the story special to me is the way it is told and the world that it exists in.  Skullgirls is designed in the art deco style and populated by anime characters straight from Japan.  This mixture of styles truly brings out a very unique looking game.

The characters, all women, range from a 15 year old lab experiment designed to kill the current Skullgirl to a 25 year old leader of a nation that battles using an umbrella.  Each character is created to be a unique play style from the other characters on the roster, so finding a character to match your play style should be easy to do.

Skullgirls has the typical game play features that many of its counterparts have, such as story mode, arcade mode and online mode.  Unfortunately for Skullgirls, that’s all it has.  There is a serious lack of features for the game and that can limit the amount of time that you may play this game.

The good news here is that the actual game play of Skullgirls is solid.  The game plays beautifully over the internet and is balanced extremely well between different types of characters.  I never felt I was at a disadvantage just for picking one character over another, and that is huge when talking about a game that is looking to become a future tournament game for competitions such as Evo.

Characters have the standard three punch and three kick buttons with various different moves using button and stick combinations.  The characters have a health bar and an energy bar, with allows for super moves that use up either one bar or three bars, depending on the move.  The dash, the cancel, and other genre standard moves are within Skullgirls as well.

The only thing that isn’t in Skullgirls when it comes to moves is an actual move list.  Until recently, you had only to guess at what each character was capable of.  Now, you can download a move list off of the Skullgirls website, but not having one in game hampers the overall quality of the game itself.

Skullgirls also has a tag mode in the game, with allows up to three versus three combat.  The game will automatically balance smaller teams to fight the larger ones, so you can change up the challenge.

With a solid game play and a half decent story line, Skullgirls is made that much more special due to its aesthetics.  As I have previously said, it combines the art deco style of the 20’s and 30’s with the Japanese anime style character, then presented in a film format.  I am a huge fan of how aesthetics really make a good game great, and this is where Skullgirls truly steps into the limelight for me.

Each character is dripping with, for the lack of a better word, character.  The women have snappy one liners that they rattle of, nice puns that work well with the world that Reverge Labs created, and are visually unique and interesting that it’s hard to take your eyes off of them.  Of course, the visuals of the skimpy outfits and some of the ladies ample physical traits doesn’t hurt either.

The music is another hit for me with Skullgirls.  The introduction with the snappy double bass line just made me smile before I even started the game.  Then the music just gets better from there, adding more and more of a vibe to the game that is missing in most 2D fighting games.

While Skullgirls isn’t perfect, it is a fantastic entry into the 2D fighting genre that, if Reverge Labs learns from their few mistakes, will lead into a fantastic new series of games for years to come.  The gameplay is extremely balanced and well thought out and the aesthetics of the game are just fantastic and are really nice to look and and enjoy.  Skullgirls does skimp on the modes that the other premium fighting games have, and there is absolutely no move list in game, you must download it and print it from the web site.  The online play for Skullgirls was also top notch with little or no lag, but the AI during story mode could be brutal and unforgiving, especially to newer players to the genre.  Overall, this game is a must buy for any fan of the 2D fighting genre, especially for those that like over the top character design.  Skullgirls is available now through Xbox Live Arcade.