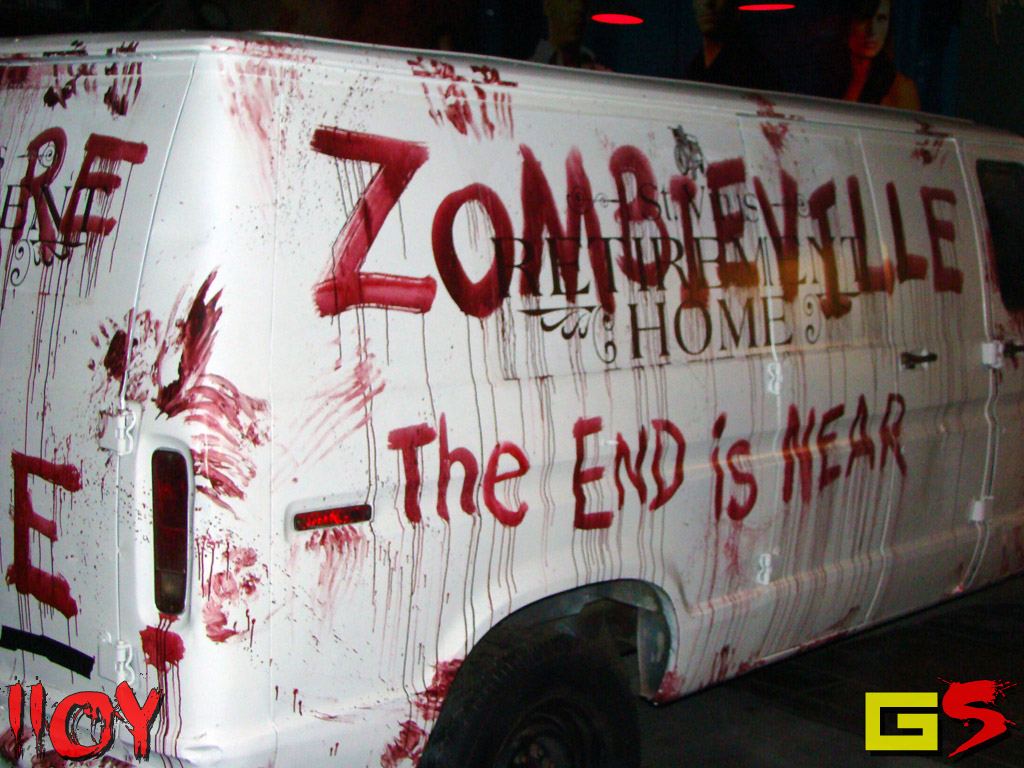 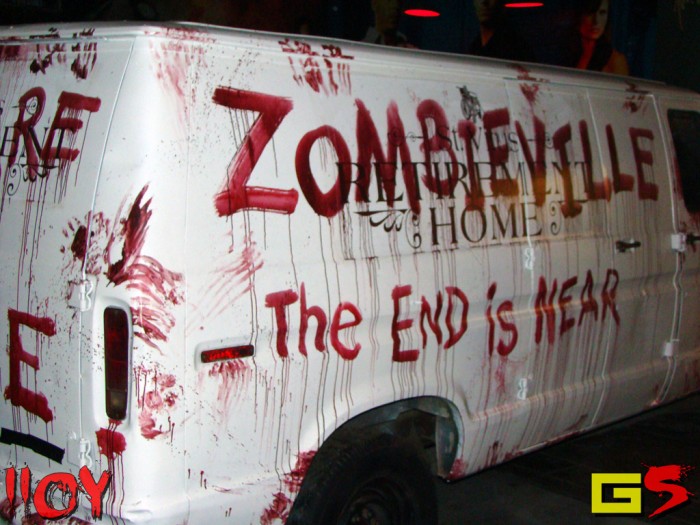 After finishing up our red carpet coverage of the 2011 Eyegore Awards, it was time to make our way into the park and get our first taste of Halloween Horror Nights for the season. We stepped in amongst a twisted world of clowns of all shapes and sizes accompanied by chainsaws and belches of fire from a huge arch and immediately found ourselves surrounded by screams and laughter, most of the laughter being of a maniacal and crazy clown manner, It was time to see what fears could be found in the park for our delight and disturbance.

La Llorona: This was proving to be the most controversial maze before it even came out due to the La Llorona myth subject matter. Last year this was a subject of a street zone and probably the poorest offering of scares that year, partially due to the crowds reaction and lack of respect to the folklore (taking pictures with the weeping woman carrying her dead baby while the public made bunny ears behind her head). This year the famous Hispanic tale was heavily researched and just about every possible variation of the legend was included in the maze with no punches pulled. We often describe this to a Wikipedia entry where everyone tells their version of what they heard growing up and it is all put into one piece. We don’t want to give away too much because it would be very easy to diminish the proper shock value you would have but no matter who complains about any part of the maze there is research to back it and it is done in amazing detail. The final scene visual just might haunt you the rest of your night at HHN. It is scary, it is disturbing, and it is executed with the love such an important cultural tale deserves.

Eli Roth’s Hostel: When this maze was announced there was a lot of concern in the haunt community that this would be too close to Saw and as a result would feel more like a recycling. Luckily this proved to be far from the truth as this maze paid some homage to the scenes in the movie but in many ways were their own beast making you feel like you were walking through another film in the series. The maze starts off before you even go in with a couple of ladies with strong accents talking to the crowd as if picking who would bring them the most finder’s fees and continues on until you come back out either stunned or being passed by screaming girls. Once again we don’t want to spoil too much and if you have gone a few times over the years you will recognized some reused props but you won’t mind because it still has a whole new feel. Make sure you listen closely to the soundtrack, it can be both amusing and disgusting on how it can twist a scare that much more. Eli Roth was seen laughing and smiling as he exited the maze on opening night so things must have been good! 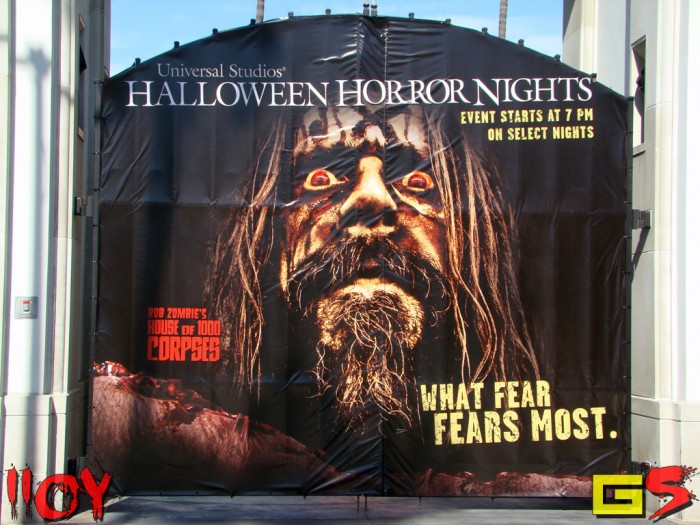 Alice Cooper’s Welcome To My Nightmare: HHN’s Creative Director, John Murdy, had grown up a huge fan of Alice Cooper so when he finally was able to work out an opportunity to work with Alice on a maze, it was one of his greatest, long time dreams come true. So knowing this we knew this was going to be a work of personal passion for John and he was geeking out the whole time he did it. The result is an amazing maze full of both eye candy and scares where when whole scenes are taken in they start to develop a surreal nightmare appearance to them. There are homages to Alice’s countless stage illusions and interpretations of songs from his vast library of work One thing we highly recommend is listening to the music as you go through since may scenes are artistic interpretation of the songs. The costuming is also fantastic, the Alice masks are so realistic it is like the rocker is there himself scaring you. We are tempted to take 3D glasses into the maze with us because though the maze wasn’t designed in 3D I can tell that certain sections it would work due to the lighting changes, heck they almost looked 3D without glasses. Definitely one of the finest mazes at any park we have experienced so far this year.

The Thing-Assimilation: The upcoming prequel to John Carpenter’s 1982 movie The Thing is the basis for the last of the new mazes for HHN 2011. The Thing is the story of some sort of alien species found in the ice in Antarctica that is able to inhabit other lifeforms bodies and take them over, leaving you guessing as to who is an alien and who isn’t. The 1982 horror classic is known for its state of the art (at that time) special effects and that same amazing detail is to be found in the The Thing maze at HHN this year. Unbelievably detailed prosthetics and nearly full body props are found through out this maze. After being startled by one of The Thing’s we wanted nothing more but to stand there and just admire the craftsmanship that has gone into the monster effects, they are THAT good. Although the prosthetics are fantastic the scares and ability to follow the storyline were a bit light in this maze. The first couple of rooms were pretty bland, but that was forgiven once we caught site of the first monster. The maze is definitely worth the time for The Things alone.

Rob Zombie’s House Of 1,000 Corpses: The only returning maze form 2010, House of 1,000 Corpses was well worth bringing back. The innovative 3-D in this maze is just astounding. The 3-D effects literally shift as the lighting does which can create a very spooky and disorienting environment. Casting is perhaps the strongest feature of this maze as the Baby and Otis characters are just as strong this year as they were last year. The actors know the roles well, and it truly feels like you are walking through part of the movie when you pass by. This maze takes us through the entirety of the movie, from Capt. Spaulding’s Murder Ride to the Firefly House and finally to Dr. Satan’s lair. We were really glad to see this fan favorite maze return this year, as it is already a HHN classic amongst fans. 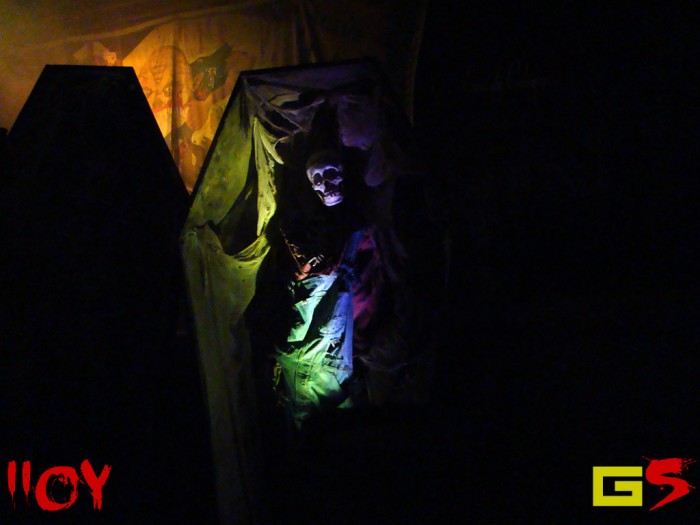 The Wolfman-The Curse of Talbot Hall: House of Horrors is home to this maze and this venue is typically is the weakest of all the HHN mazes every year. This year is no different as it’s very difficult to theme an already themed year round haunted attraction into something else. However, the talent in The Wolfman maze completely gave it their all when we went through. Wolves were stalking us and leaping towards us doing their best to gives us a good scare. It should be noted that if you are experiencing HHN with someone who is unable to use stairs, which this attraction has plenty of, there is an elevator to bypass them. If you didn’t get Front of the Line passes put this maze off until the last half hour before closing. Due to its proximity to the entrance the lines can push 90mins during the busy portion of the night, but is a 10-15min wait typically right before closing.

Bill and Ted’s Excellent Halloween Adventure: This annual show full of pop culture parodies returns with Bill and Ted and a slew of guests from the news over the last year. The Bill and Ted show is a mixture of comedy, satire and song. Every year they close the show with a big musical number showcasing some of the past years biggest talents. This year songs are featured by Adele, Chris Brown and Rhianna. The comedy skits fell a bit flat this year we thought and the biggest villain of the night was someone we didn’t expect thinking their time in the spotlight was over several months ago. Again, we don’t want to spoil anything for those going to HHN this month, but Bill and Ted remains a good show to get some laughs and rest your feet a bit before heading back out to the screams.

Terror Tram-Scream 4 Your Life: Terror Tram 2011 is such a vast improvement over the disjointed Chucky theme that 2010 brought us. The premise this year is that you’re visiting the various sets for a few new horror movies that are shooting on the Universal Studios backlot. Of course Ghostface Killer has found his way onto the sets and is making mincemeat out of those unlucky enough to cross his path. One of the coolest things to do at HHN for horror fans is to be able to walk right up to the Psycho house and Terror Tram gives everyone that opportunity, IF you survive the uphill walk that seems to be just teeming with wildlife and who knows what else that goes bump in the night. The Terror Tram theme flows much better this year than last, it’s a definite improvement.

Scare Zones: We’ve always found the scare zones at HHN to be a fun way to move from one part of the park to another and this year is no exception. The Freakz scare zone stands out as the strongest one of the night to us. The masks and life breathed into them by their scare actors is just outstanding. They are weird, fright inducing and, of course, freaky. The masked Reapers are a great replacement in the lower lot to the Chainsaw Pigs and make sure you stop and watch the Ringmaster Clown just under the fire jets in the Klownz scare zone in the upper lot. All in all the scare zones are very entertaining. 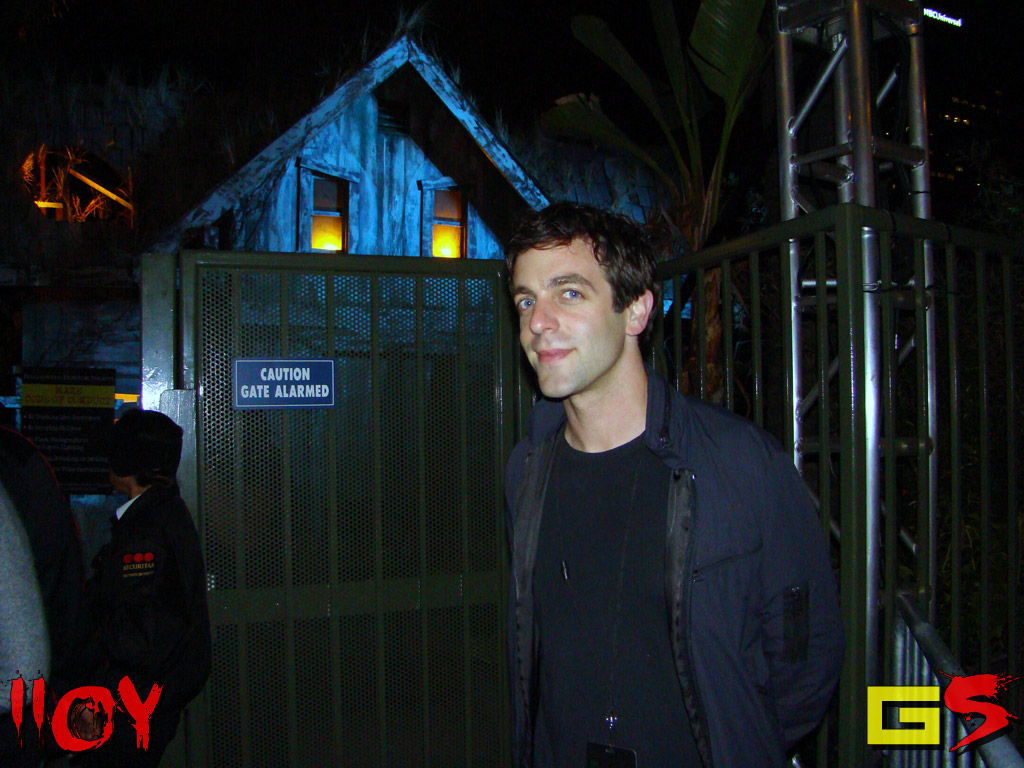 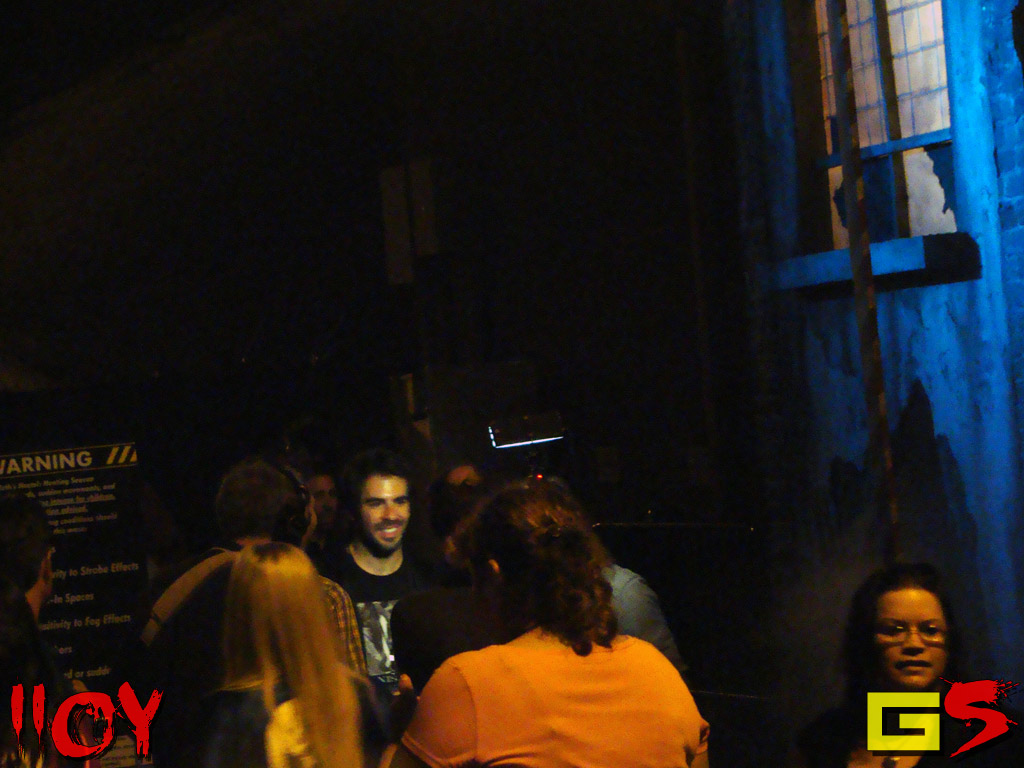 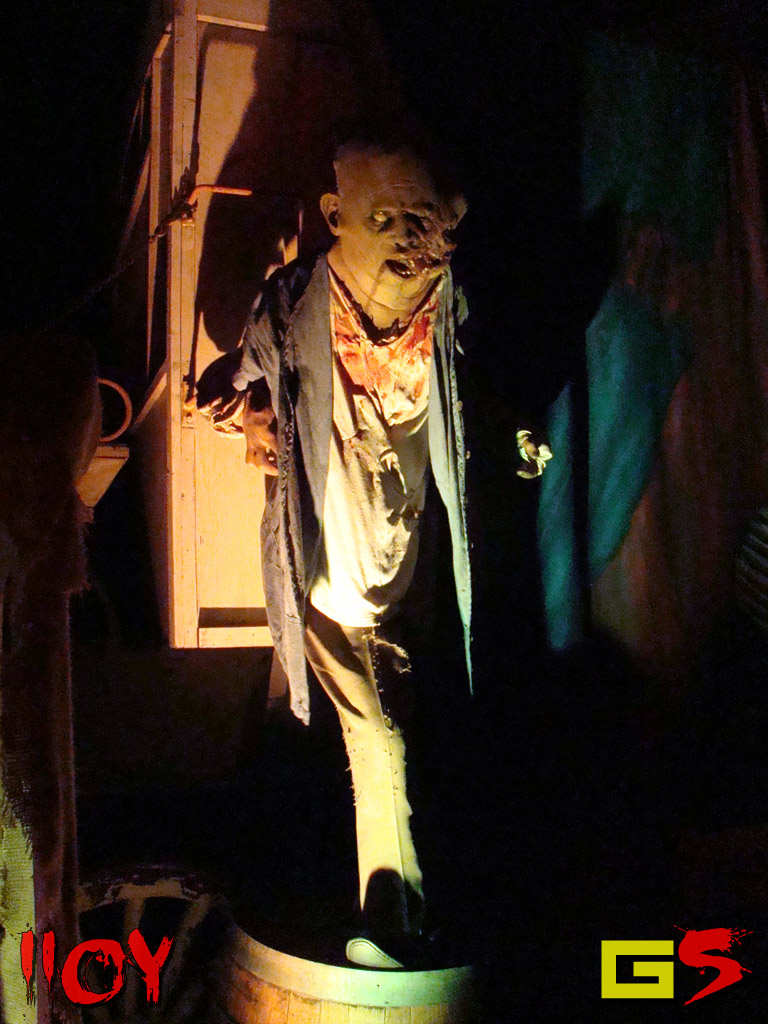 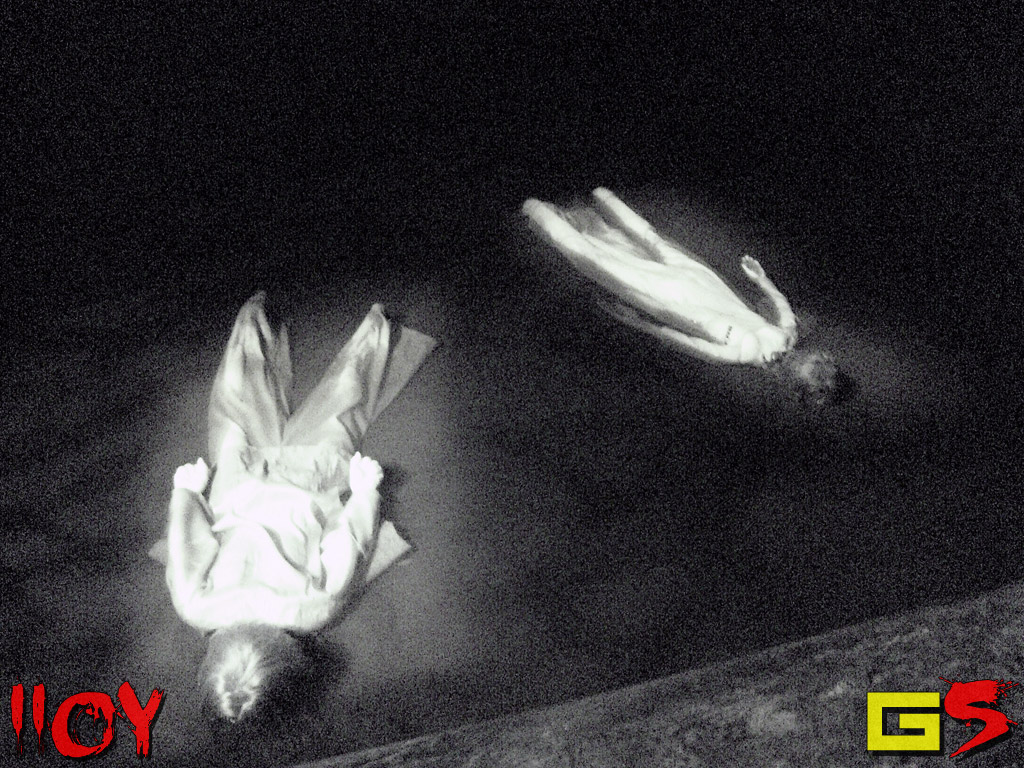 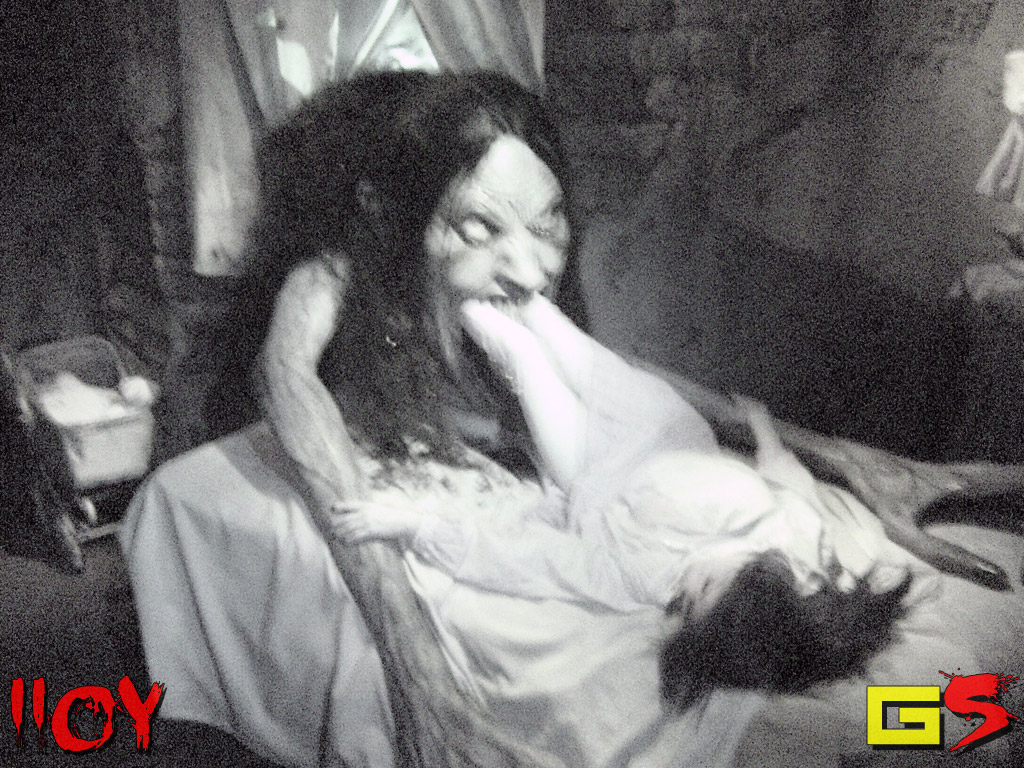 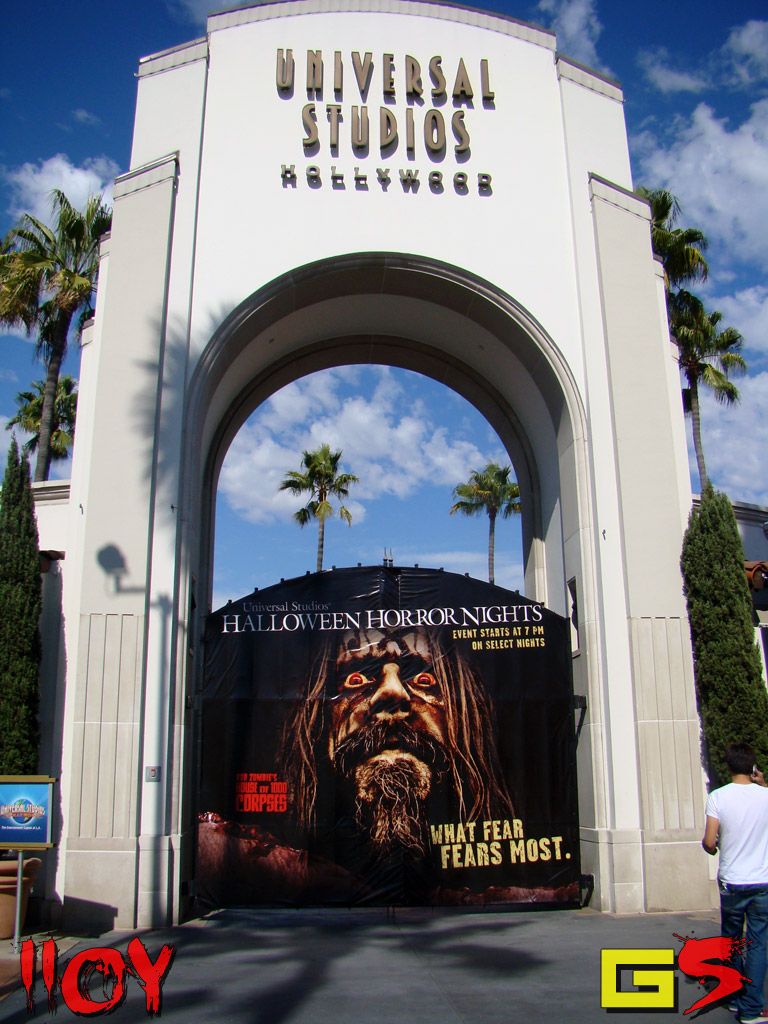 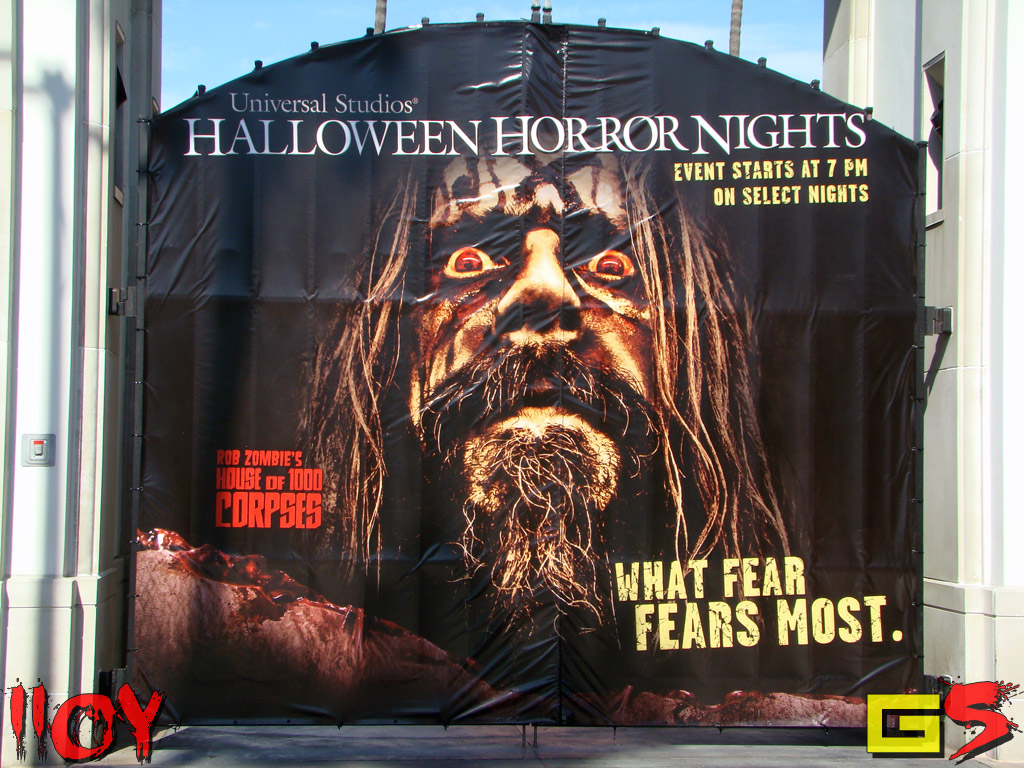 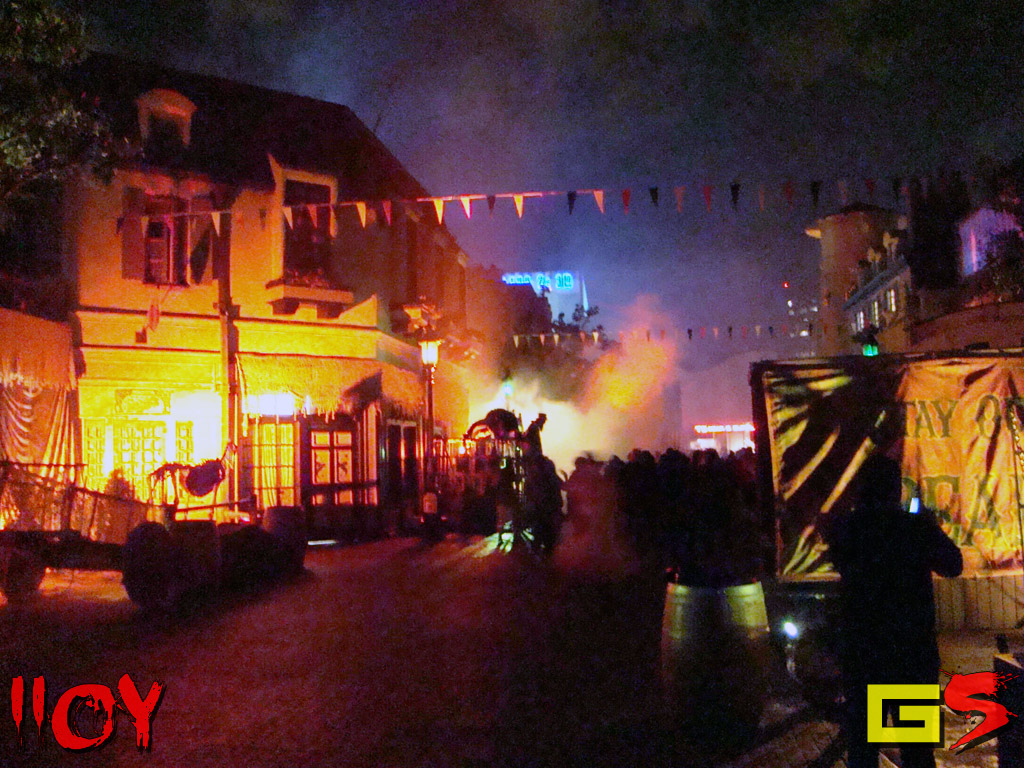 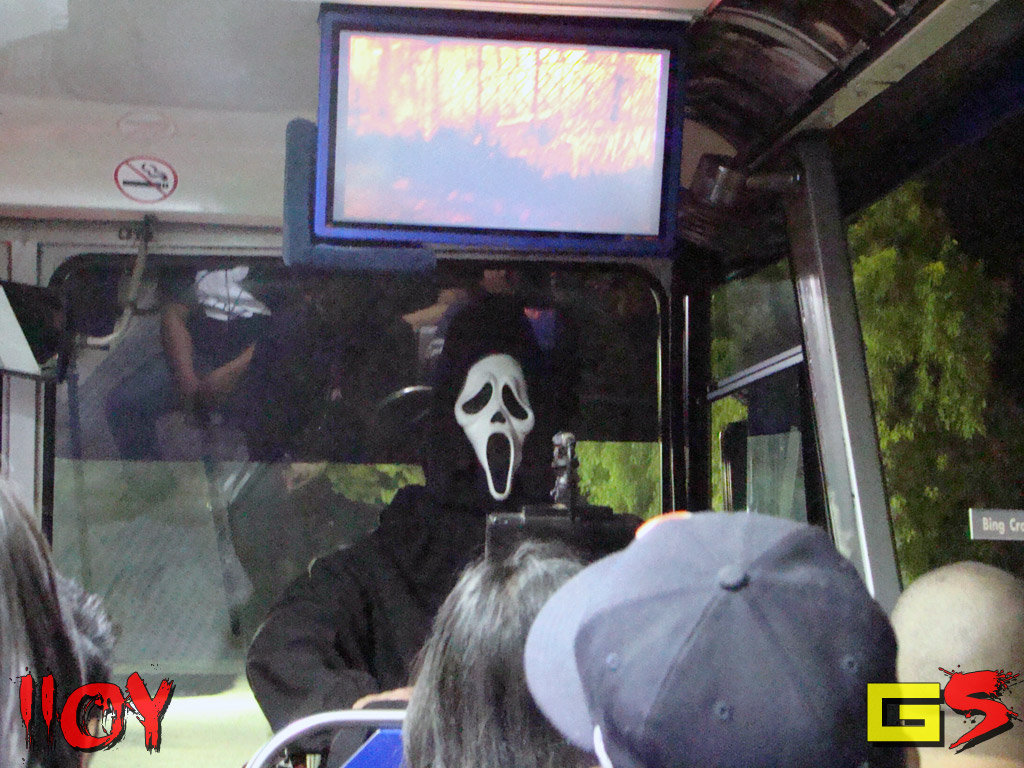 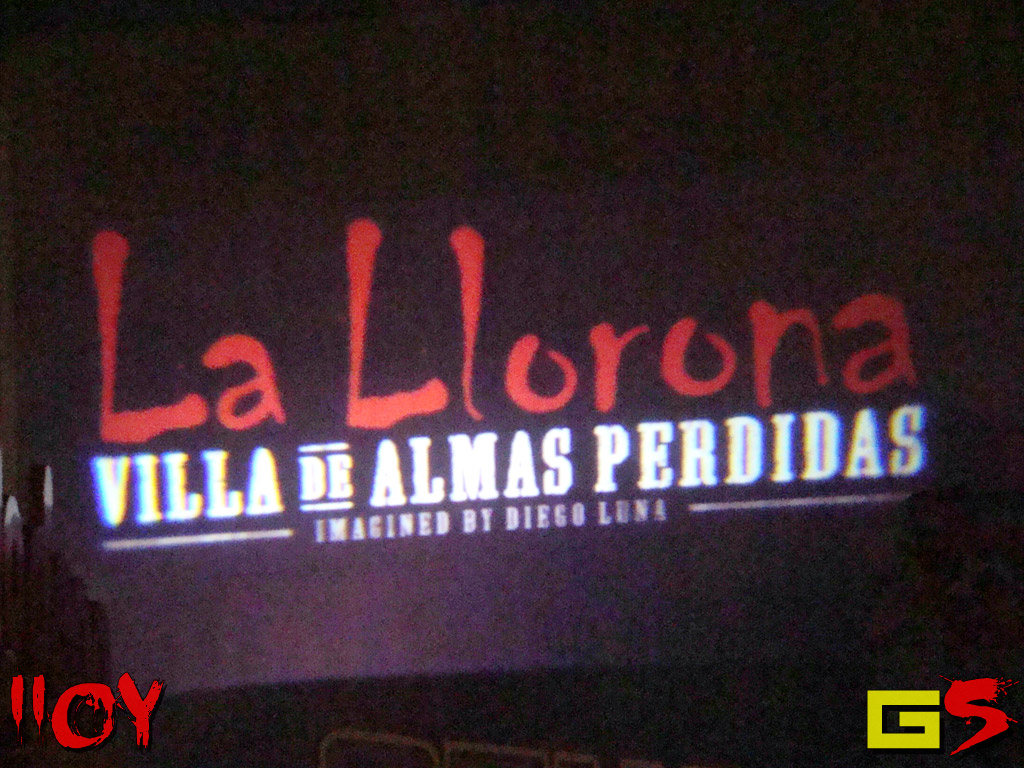 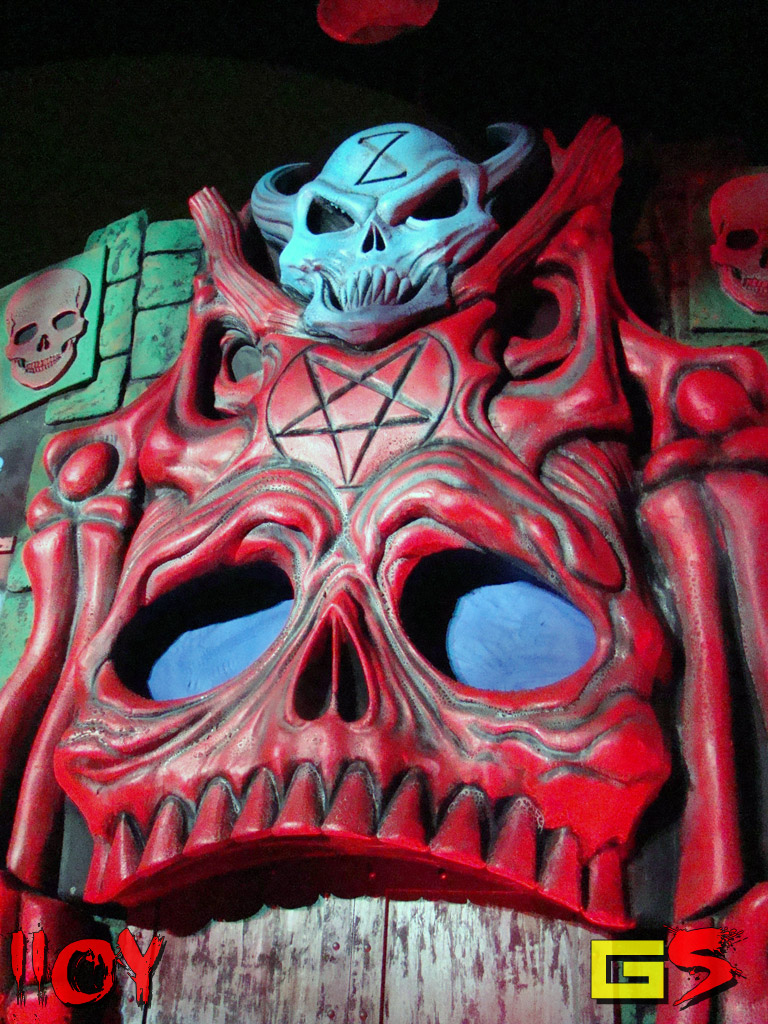 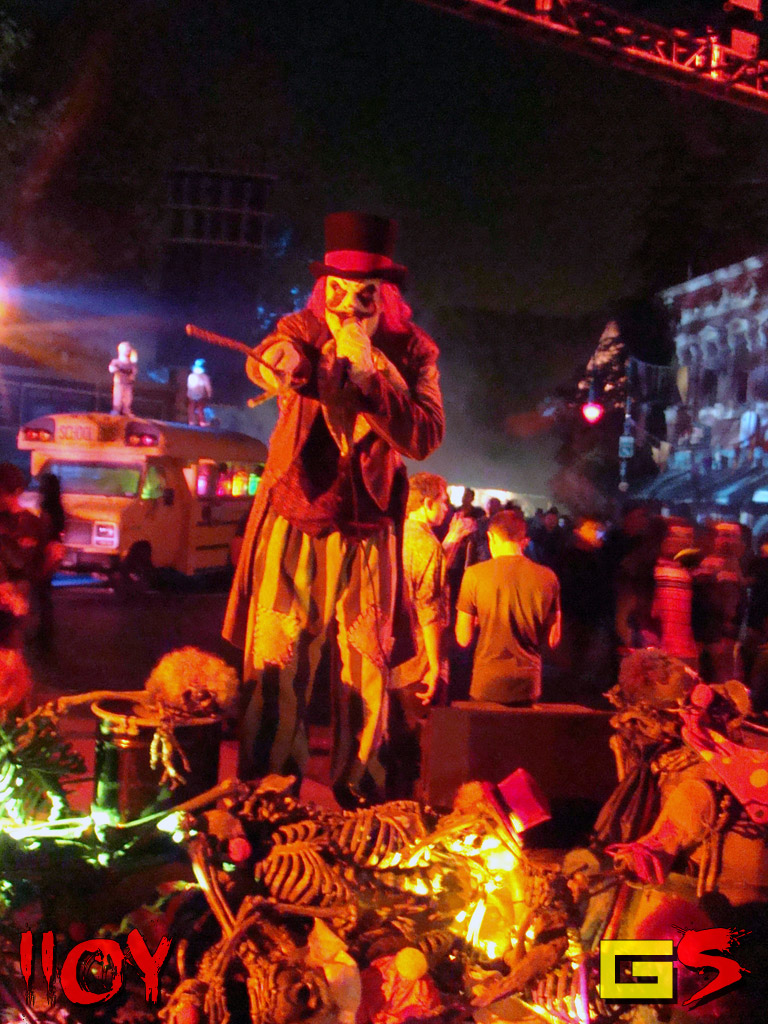 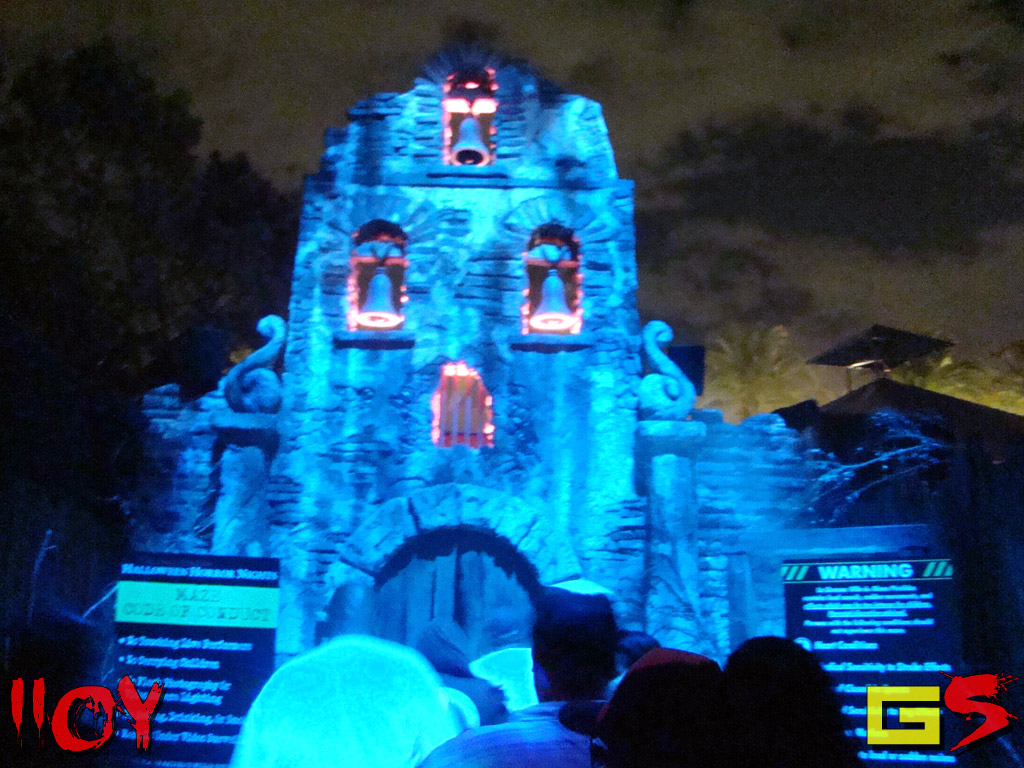 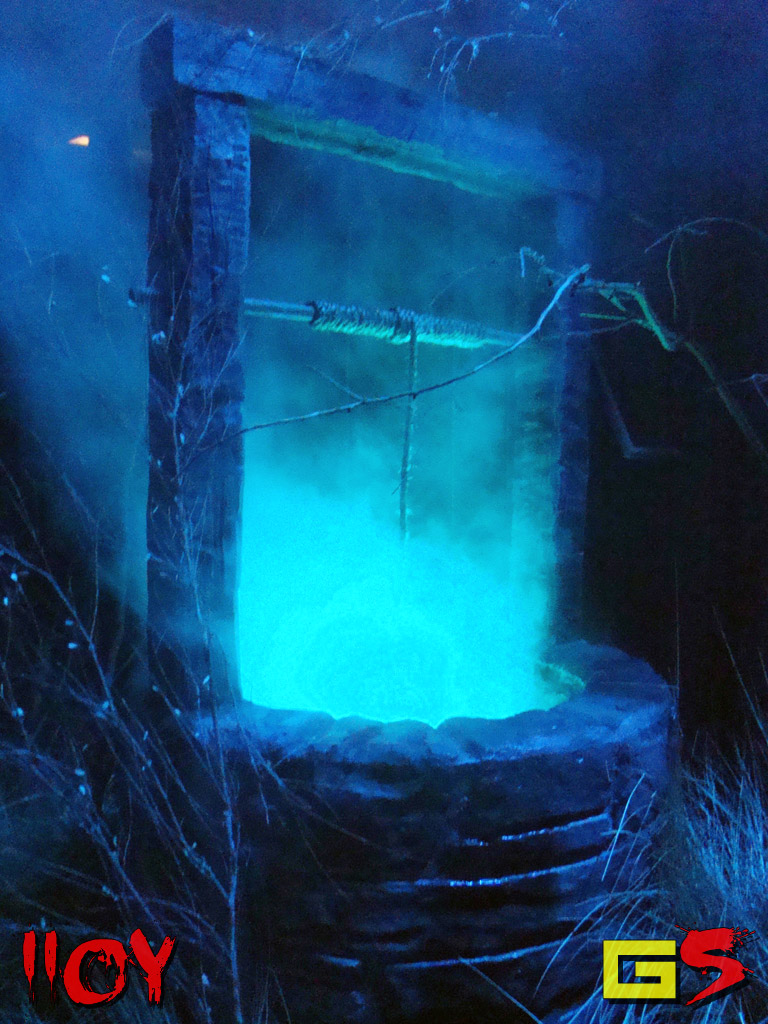 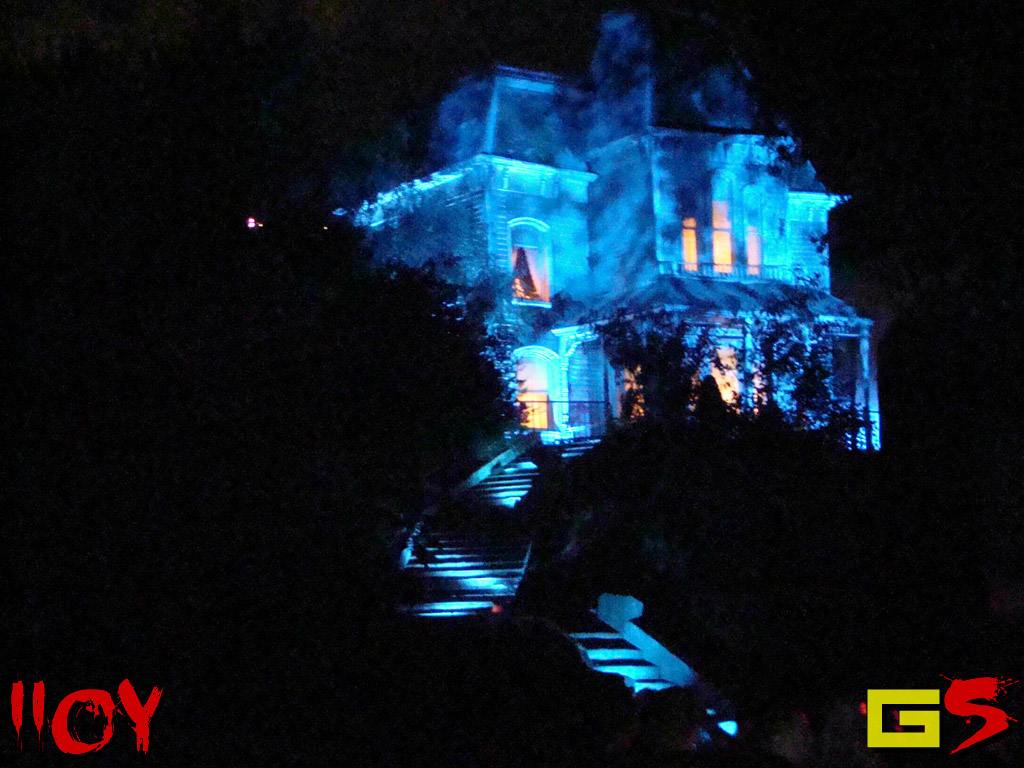 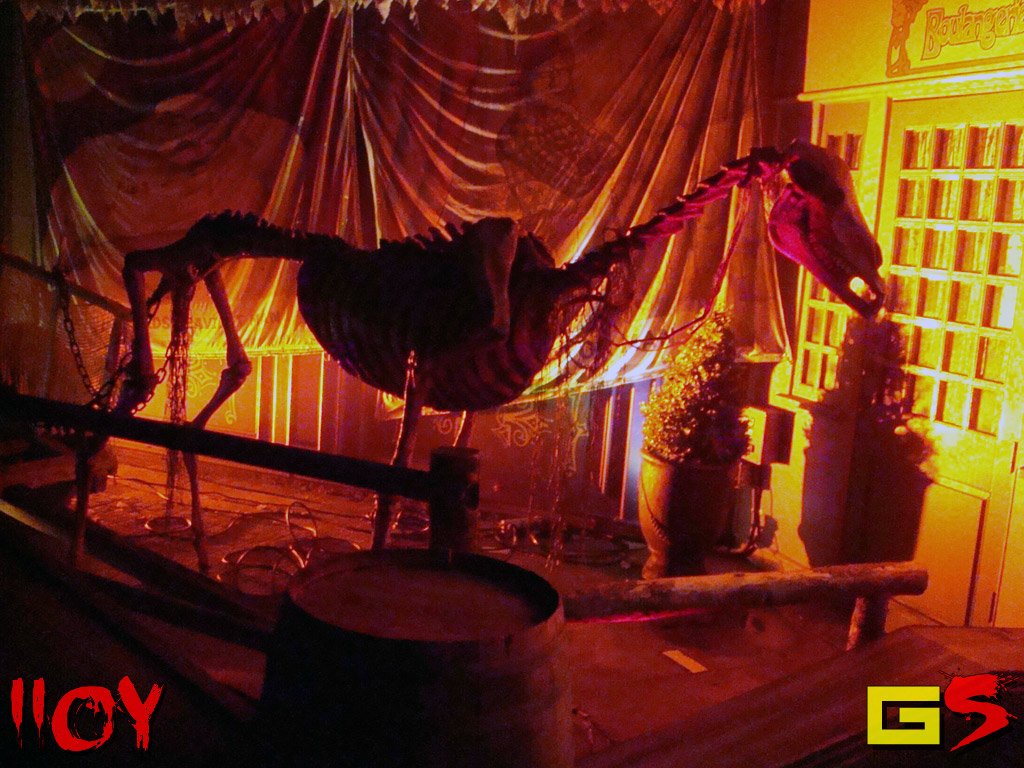 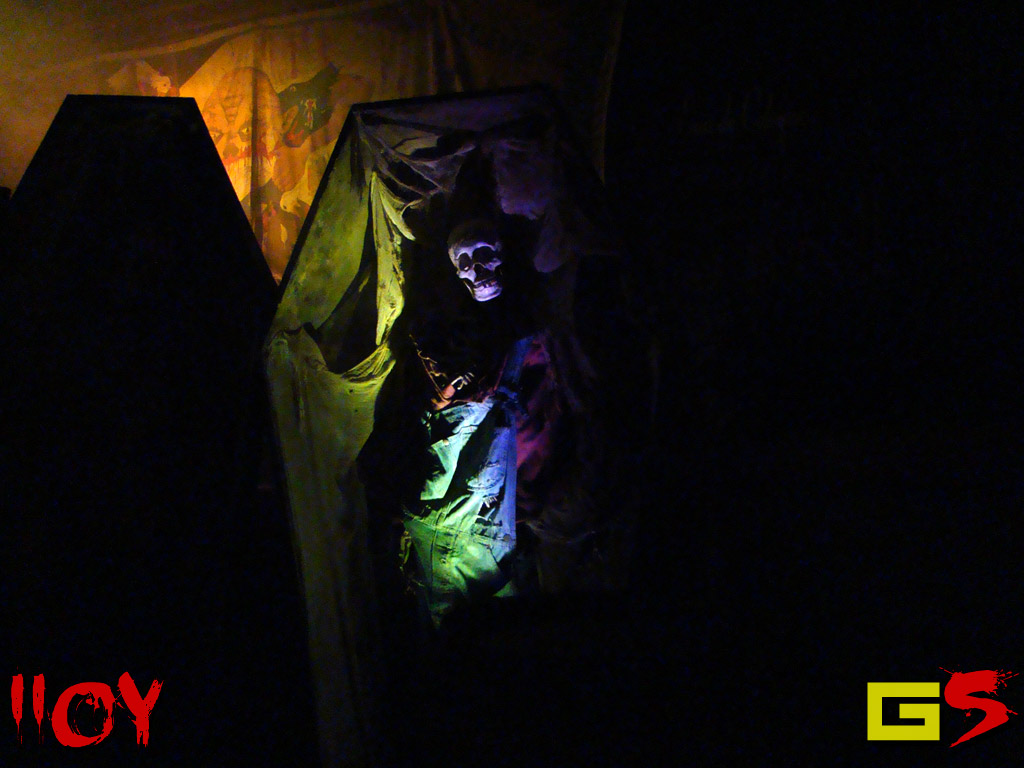