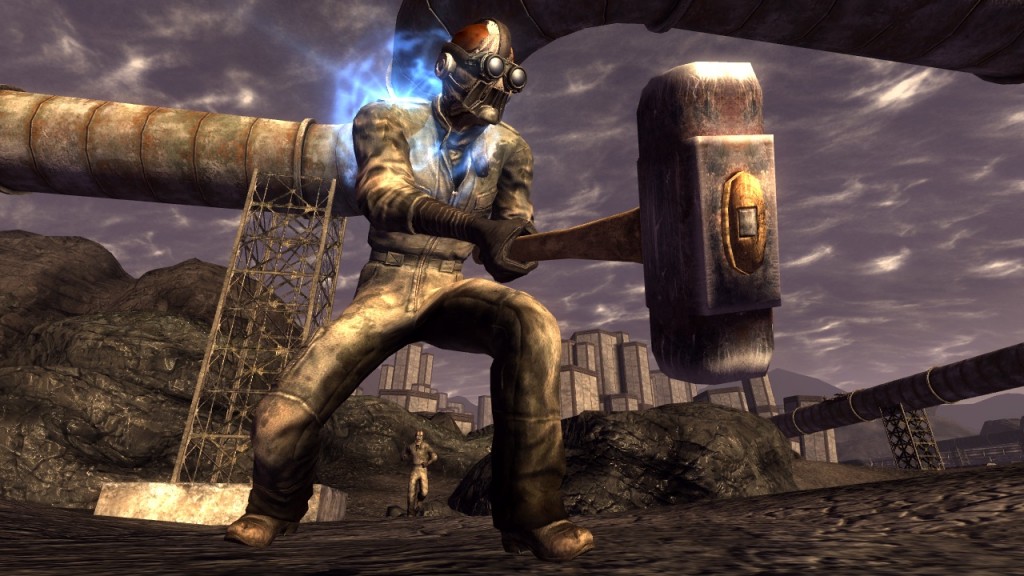 The latest expansion to Fallout: New Vegas, Old World Blues, once again takes you far away from the expanse of the Mojave Wasteland to a secluded area known as Big Mountain, or the Big MT (get it?). Does this expansion justify the download, or does it leave you feeling empty (get it? Again?). If you’re a fan of New Vegas you may have found yourself feeling a little disappointed in Dead Money’s awkward survival horror slant and Honest Hearts felt a little too unspoiled outdoorsy for your tastes, let me introduce you to Old World Blues.

In a nutshell, if Old World Blues was a member of your family, it would be your drunk uncle: Nonsensical, rambles on a bit too long at times, gut-bustingly hilarious, and an absolute blast to hang out with.

Old World Blues finds your courier responding to an invitation to a midnight movie at the old drive in. Upon pressing play, you are whisked away to a fantastic world full of mad scientists, robot scorpions, and a talking toaster.

You wake up to find yourself sans brain, spine, and organs. Why? Why not! A victim of some heat-of-the-moment surgery by an insane group of mad scientists, you are forced to track down your brain who may or may not have grown legs of it’s own and trotted off to spend time with an even madder scientist than those who removed it in the first place.

Old World Blues earns high marks for being the most hilarious addition to any Fallout game to date. The writing is top notch and the expansion is full of unique characters, like a toaster with dreams of being a heat powered death ray.

While it is quite long for an expansion, it can get quite lonely. Unlike the previous expansions to New Vegas, you have no companions throughout the Big MT. Instead you are on your own throughout the full five hours or so of gameplay and the fetch quests can get a little repetitive. To offset this however is some fantastic voice acting as your captors will frequently spout insanities over the speakers throughout the research facilities.

Once again, the level cap is raised by five and there are a handful of new perks to choose from, including one that let’s you respec your character should you decide you want to change things up a bit.

In the end this is a must buy for any New Vegas fan. With a host of awesome loot to bring back to the Mojave Wastes and some of the funniest dialogue this side of GLADOS, you’d be hard pressed to not enjoy a vacation in the Big MT.