A great spy story is something that game developers have not really been able to do, especially in Western markets. Now, I am not writing of spy stories a la Splinter Cell or 24: The Video Game – games such as those are too serious for the genre of spy story I am looking for. In my spy dreams, I am not Matt Damon playing Jason Bourne – I am Sean Connery as James Bond – Brash, suave, and not afraid to kick evil mastermind ass after bedding the ‘crush of the week’. Despite being somewhat ‘thin’, Alpha Protocol’s story and protagonist were exactly what I was looking for…

Alpha Protocol is based on a skill point system. There are skills in each weapon category (pistols, shotguns, assault rifles, and machine guns), including melee fighting, as well as useful skills like ‘Stealth’. As your character gains levels, you will outfit him as you see fit, hopefully making him a more efficient spy in the manner you wish to play it. However, at the start of the game you are pretty much skill-less. You wake up in what appears to be some sort of medical facility and fight your way out to find it was an initiation of sorts by a top secret US spy organization known as Alpha Protocol.

From your first conversation in the game with a mysterious voice on a PDA, the game’s conversation choice system comes into play. Throughout your various interactions with other characters of the Alpha Protocol universe, you will be presented with a radial menu asking how you wish to respond in the upcoming line of dialogue. Your options range from ‘Suave’ to ‘Aggressive’ to ‘Professional’ and each label does an adequate job of describing your upcoming response. There were a few times, however, a label did not mean what I thought it did and my character said something I did not want him too. In that respect, it’s a lot like real life and all the times we stick our proverbial feet into our own mouths. 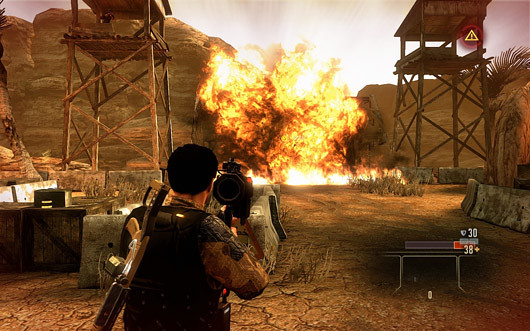 As you go on your first assignment, it is clear that nothing you have been told about the situation is what it seems. From the climax of this first operation you basically act as a rogue agent, working to uncover the truth while evading both your enemies as well as your own government. From this point, you can either take on allies from unlikely sources or arrest and/or kill many of them. Be warned, however, that in the spy game one hand usually washes the other and those contacts you are friendly to could be instrumental in the conclusion of the game’s storyline.

During missions, gameplay is handled in an over-the-shoulder, third-person perspective that you have definitely seen in other games. Gunplay is handled well, but the skill-based system means that even if you are a good shot in terms of actual mouse-usage, which I am, you may not hit what your reticule is on. I wish they would have gone a little more Mass Effect 2 on this end than Mass Effect. However, if an Alpha Protocol 2 is made, maybe they will. You have access to various weapon types, from pistols to assault rifles, as well as neat gadgets like remote mines and shock traps. This part of the gameplay is quite neat as these traps can be attached to walls. Attach a trap to a wall, run for cover, then use the sound generator to lure enemies to your location. Before you know it, your trap will be sprung and enemies will be lying on the ground, incapacitated (or burnt to a crisp if you used an incendiary trap).

In addition, every weapon has multiple ammo types to use. The pistol, for instance, as the standard rounds, tranquilizer rounds, and steel core ammunition. Also available via the game’s marketplace are new weapons and armor as well as upgrades for each. In a cool tie-back to the story, the selection of items changes depending on your relationship with various arms dealers as well as your physical location at the time.

Visually, Alpha Protocol ranges from average to above-average. It never blew me away with eye-popping graphics, but the game consistently provided me with enough visual flare to continue playing. Alpha Protocol’s audio work is above-average, with a multitude of environmental effects. The voice work in the game tends to be believable, if not slightly wooden at times, but they did a good job overall. Enemy soldiers do tend to have diarrhea of the mouth

You will also get the option, every so often, to select a handler for your missions. A handler, for the spy game-initiates, is a person who sits on the other side of a small LCD screen on a PDA and walks you through your mission tasking. Each handler will give you a different bonus to your abilities should they like you enough.

This brings up the relationship system between various characters and Michael Thorton. These conversation choices will either raise or lower value of your relationship with the other characters. Say something they like – you get a +1, otherwise, a -1 or 0 point change in relationship. This actually works rather well as the entire course of a conversation can change if the other person likes or dislikes you. Don’t think you need everyone to like you, either. Get an enemy mad enough at you and they might make a mistake, giving you a prime opportunity to take action. 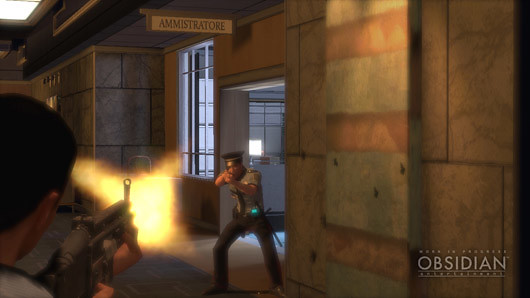 The dialogue in Alpha Protocol is not all that novel, nor is its delivery. However, it is by no means ‘bad’ and makes for quite an enjoyable experience on the PC platform. I have heard console gamers say that they have run across a number of technical glitches. Thankfully, I came across no such demons in the PC build of the game.

At a slightly later point in the game, the world opens up and you are given the choice of three very different locations to visit and investigate. The game adapts wonderfully, no matter what sequence you explore them. SEGA and Obsidian have done a fine job in that respect.

Where Alpha Protocol falls short is in its unpolished feeling. The gameplay just never feels like it works 100% as planned. That may sound a bit esoteric in terms of description, but it is a hard thing to quantify. Even the level design is often mundane and linear, with the exception of a nicely-put together rail yard sequence where you have several options on how to play through it. There is a simple cover system, but it does not work smoothly enough to be reliable all the time. Sometimes my character would be right up against a wall and the space bar, which activates the system, would not work. I would have to run away from the wall a ways, then back to it and the cover system option would be available.

In effect, Alpha Protocol feels like you are playing out an episode of the USA Network’s television series, Burn Notice (ed. note: Can we get more Psych, USA Network? Come on!). There is even a handler who refers to you as ‘Mikey’ in the same style as the character Sam does on that show. Alpha Protocol is a popcorn spy-flick, and whether you choose to go as an ex-soldier, ex-field agent, or even mercenary skill-build you will have a great time playing it through should you look at it as such. There are just enough plot twists to keep things interesting and the interweaving aspects of the game make you want to replay it with different choices to see how things turn out. Those players looking to be Daniel Craig as James Bond, Matt Damon as Jason Bourne, or even Kiefer Sutherland as Jack Bauer will be disappointed.

My hope for Alpha Protocol is that SEGA keeps the campy spy storylines and creates a series of downloadable ‘episodes’ that we can continue to play and enjoy after we finish the main campaign.