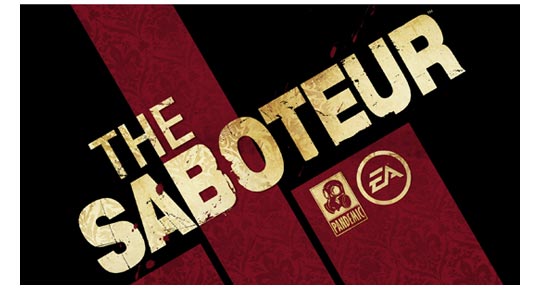 Hidden up in the meeting halls of the 2009 Electronic Entertainment Expo was what may have been the gem of the show. GamingShogun got the chance to go behind closed doors and check out Pandemic Studios Nazi action game The Saboteur.

We arrived to the meeting room and sat down with one of the games producers who gave us a quick run through of the story in the game. (cont)
You are a resistance fighter in France by the name of Sean Devlin. Sean Devlin has a fancy for brothels and race car driving but his secret life has a resistance fighter against the Nazi regime is the focal point of the game. Sean Devlin’s fight against the Nazi’s is based off of revenge and the story is very dark. The producers pointed out that the entire story is based on the real life of French resistance slash race car driver during those times.

The first thing you notice about the game is the graphics. Hands down the Saboteur was the most beautiful looking game of the entire show for me. It’s noir look reminds me of the film Sin City as the areas controlled by the Nazi’s are in black and white except for certain things in color. Street lights and Nazi arm bands all glow their respective color in the Nazi held parts of the game catching your eye. The city is alive with things going on all around you. If you are in Nazi controlled section of the city you will see guards marching, beating on citizens, and different military exercises. 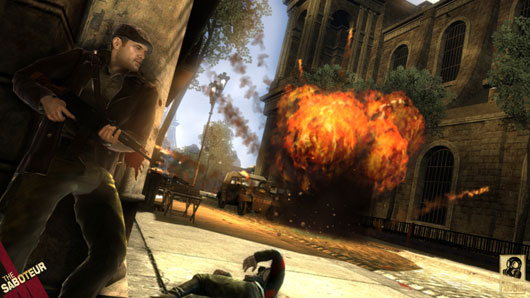 The non Nazi controlled areas are alive and bright with color. Citizens go about their daily business and can even lend a hand in certain situations. Pan around the city and the sky is a bright blue and if you happen to look into the direction of a Nazi controlled city you can see the change in color. Buildings are detailed and all natural landmarks are there. The team studied French history and made sure every little detail was in place. The landscape is huge as you can go from France to the shores of Germany and there is always something going on.

We got the chance to see some action as well. The simple motto of the game is ‘quiet in and loud out’. Sean Devlin was shown sneaking into a Nazi factory and slipping behind a guard to take care of him. The animations were smooth and our hero took the guards clothes disguising him as a Nazi officer. Sneaking through the factory he placed an explosive on a his target and had about 10 seconds to get out of the way before the explosion. You have several options at this point. You can either slip out quietly or stay and attempt to fight. In this case we stuck around and were bombarded by Nazi’s as the alarms went off. The producers decided to book it and hopped into a car. The chase was on as Nazi’s followed our her but in the end we hid out in a local brothel. We told you he had a fancy for ladies right? Driving is an important part of the game as it does work with the story. while I am not a fan of driving missions the one we saw looked very smooth and easy to pull off. 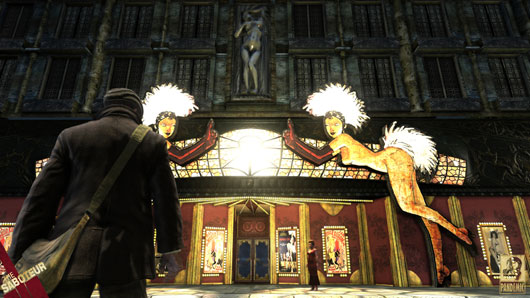 We were shown another small mission where your goal is to take out a large Nazi cannon. On the way to the target we went back into the black and white Nazi controlled zone. On our right was a Nazi outpost that was highlighted in red. It was explained to us that these were side missions to help improve your standing and could also effect the current missions you are on. Having a problem with a missions because of a sniper tower? You can leave that missions and take out the sniper tower instead thus paving the way for you to better complete your goal.

Once arriving at the mission area we were shown the climbing aspect of the game. Sean Devlin has a fondness of heights as well. You can climb rooftop to rooftop in order to get a better line of site with your targets. Animations were not jerky at all and the character climbed easily from different rooftops. There are tons of weapons to be found along the way. Pistols, sniper rifles, flame throwers, and bazookas. Some of them hard to get as the developer does not want you just going around and blowing stuff up. 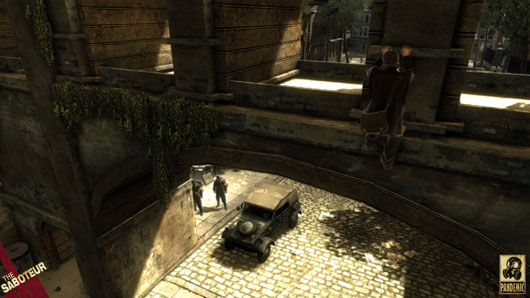 As we worked our way through the cannons base camp we were able to kill enough Nazi’s to be able to plant the explosives at the cannon. Once out of range the cannon exploded and one of the most beautiful things i have ever seen in video game happened. Like a stroke of a paint brush the black and white harsh world of the Nazi regime went away and was replaced by the bright and colorful free world. This was jaw dropping visually and I thought it was a unique new concept. the mission ended with a fun little surprise from the developers. They grabbed a bazooka and aimed to the sky at a passing zeppelin sending it crashing down to the world below.

The Saboteur without a shadow of a doubt was the game of the show for me. You are looking at fifteen to twenty hours of gameplay with the main story and forty plus hours if you do everything in the game. It is set to release fall 2009 for the PC, PS3, and Xbox 360. Do not miss this game!