Every kid growing up as played some form of cops and robbers. Realtime Worlds has brought that to adults with its very ambitious MMO called APB. GamingShogun was treated to a behind closed doors demo of the game at this year’s Electronic Entertainment Expo (E3) and, boy, is it deep.

The demo was given to us by one of its senior producers and a community manager. We started off with a very detailed look at the character creation system (cont)
The one thing that the developers of APB wanted to drill into our minds is that APB follows a three word philosophy. Creativity, conflict, and celebrity. The creativity portion is all about the character creation system. This may be the deepest system I have ever seen beating out the City Of Heroes franchise.

We got a chance to see a female model for the first time and there is not a single thing that you cannot change or manipulate on her. The point of this much customization is that the developers want you to be able to stand out from everyone else in the game. The characters are meant to be human looking and not grotesque. this is really a system about looking good and not looking like an abomination walking down the street. Although if you try hard enough the developers did admit you can make some freakish looking folks. 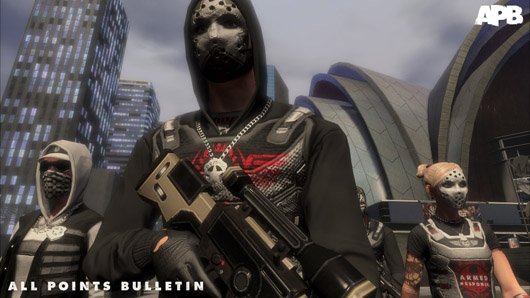 Skin color changed be changed all the way down to pigment and tattoos can be layered to create full sleeves. The unique point is the system knows how to layer this so they will place correctly and not look awkward. I will wrap around say a shoulder or even correct the color so it blends with the pigment of the skin making it look real. The character creation system is so deep they even showed off a model that was created of President Obama. The model looks exactly like Mr. President.

You can create all these logos for the tattoos by hand in what APB is essentially calling their crafting system. It is a paint style program where you can get down to fine brush strokes to create your own images. Images can be created for clothes, tattoos, and even cars. Placing these images on a car for instance will once again place correctly instead of say covering up the glass on a window. 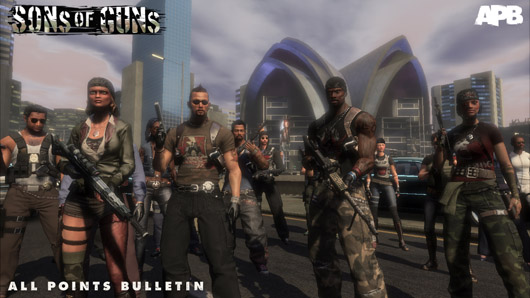 This is where celebrity comes in. With the deep customization and crafting mechanics you literally can become a car modder or clothes designer. APB developers want you to stand out in the world. Don’t feel like playing any of the actual game itself? That’s not a problem at all. You can use the crafting system to create your brand so other players will know of your celebrity status by the looks of the things you create. All these things can be put up on an in game auction house. This really gives a chance for casual yet creative players to make their mark in the game.

The final twist they had for us with creativity and celebrity was an in game midi sound editor. You can go in and create a sound file that will play to your opponents when they are killed. They used the example of someone making the Super Mario theme. Imagine having to hear that every time you die.

Last but not least there is conflict. APB was created by Dave Jones who is the creator of GTA. Needless to say the game has a very GTA feel to it but with some unique twists. APB is a player driven story based MMO with the enforcers vs the criminals. Each side has multiple factions or gangs to choose from. This is a living breathing city and it is all dynamic match making. There are no lobbies to choose from and like any world there are crimes happening. 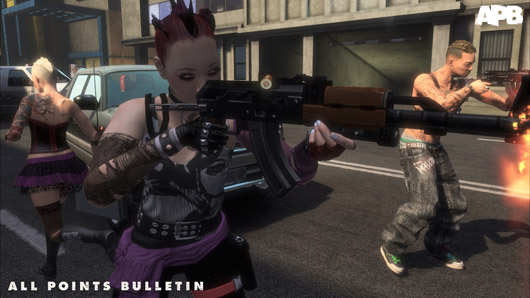 We were shown a case where one of the gangs went in and broken into a car. when this happens the enforcer side is alerted and it matches players by skill level in up to a 4v4 death match. Whoever comes out of that death match is the winner with no death penalty and a small respawn timer. If you are a higher skill level you may be going up against 4 members of a lower rank. This is a great way of keep things balanced and fair. Enforcers have morale decisions to make on weather they decide to kill or the much harder arrest. You are even able to become a dirty cop which of course may hurt you in the long run with your standing in the city.

With the living breathing world of APB Realtime Worlds has included a VOIP service that lets you hear battles in real time. As you are walking in the world you may here gun shots and head towards the area. When you get in range you will actually here the teams talking back and forth. Total immersion with this feature. There is also Last.FM integration with the game where if a car drives by and is playing a song in your library you will hear that song. Don’t have that song in your library? Oh well that’s ok as it will just pick a similar artist. Very cool little feature.

All in all APB is shaping up to be one hell of a fun game. The rich customization really offers a level of immersion that I have not seen before and the dynamic matching is a way to make lower players feel like they belong in the world. APB is set to release in 2010 and will not follow the standard MMO subscription plans. It will be released on the 360 and PC so prepare to make a name for yourself!