I must admit that I was not really hyped about Just Cause 2 when we arrived at the 2009 Electronic Entertainment Expo a few days ago. Its not that the game did not seem like it would be entertaining or well-done, I just had so many other games on my mind at that moment it was pushed aside. However, after seeing Just Cause 2 at the behind closed-doors presentation with Eidos I am salivating for more. (cont.)
We took our seats inside the small presentation room Eidos had setup to show off Just Cause 2 and Lead Game Designer Peter Johansson began to talk about the game. When Just Cause 2 finally did show on the screen we were treated to a stunning vista from a peak on the fictional island of Panau. At the edge of the peak was the game’s protagonist, Rico Rodriguez. After spinning the camera about a few times to show off the incredible draw-distance and scope of the island, which measures roughly 400 square miles in area, Rico jumped from the peak and began plummeting to the island below.

His target: some random military encampment. At a thrilling (and dangerously low) altitude the devs popped Rico’s shoot and guided him towards the base, spraying the caught unawares enemies below with machine gun fire from above. Then, Rico deftly kicked off his shoot and began what can only be described as a ‘spree of destruction’, the likes of which we have never seen. The developers pushed Rico in an etxremely deft manner all around the base unleashing hell on the enemy.

Rico’s method for unleashing this hell? His stunt parachute and grappling hook arm. The combinations of tricks and stunts one can pull off using these instruments is really bewildering. The player can shoot his grapple at a distant location, begin pulling himself towards it, then disengage the grapple and engage the ‘chute. This instantly puts the player in the air and not only gives the death from above advantage but also allows Rico to travel quickly and get a better vantage of the terrain below. 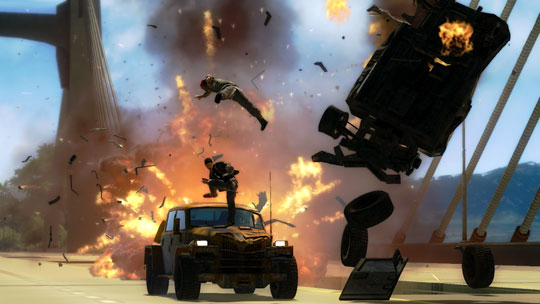 Another thing which the developers showcased was Rico’s ability to tether two objects together with the grappling hook. In another scene of the presentation, we were treated to a thrilling car chase with Rico on the roof of a beat-up SUV. The driver was a man he had just rescued in a thrilling high-rise action-fest which ended with Rico pushing both of them out the window into a free-fall. Thankfully, Rico had his chute or they both would have been a little splat soon after. Back to the car chase: so with enemy Humvees gunning down on them, Rico could do all sorts of action film-style tricks to dispatch his foes. Using the tether feature of the grapple-arm, Rico connected an enemy Humvee at the side of his vehicle to a bridge arm. This caused the enemy Humvee to come to a very quick-stop and fly backwards into the air towards the bridge arm in the opposite direction. It really felt like we were watching some 80’s Schwarzenegger movie.

Rico can even tether enemies together to prevent them from escaping a grenade he lobs their way. This gameplay element seems well-implemented and, coupled with the re-usable stunt parachute, brings a whole new element to the third-person shooter.

In order to end the violence taking place on the island of Panau, Rico must cause as much ‘chaos’ in the enemy ranks as possible. This ‘chaos’ level is how Rico decreases the enemies’ sphere of influence.

One eye-opening feature of Just Cause 2 is just how many places there are to visit (and destroy). The area of gameplay which the developers showed us was displayed on the in-game map. We could see the peak where Rico started as well as the enemy camp and bridge. Places to disrupt the enemies’ influence are displayed as icons on this map. Well the developer began zooming the map out and it became startlingly apparent just how large this sandbox-style game really is. The area os the map which filled the screen just seconds before was now just a small spot on a much larger map showing hundreds of location icons.

Just Cause 2 is set to release in 2010 on the PC, Xbox 360, and Playstation 3. I might not have been hyped at the beginning of E3, but I most-certainly am now and can’t wait to play this one.