If you had a media pass at this year’s Electronic Entertainment Expo, or were just really lucky, you could stand in line to get special look at THQ’s upcoming Warhammer 40k: Space Marine. We have enjoyed THQ’s W40k offerings before, but this game represents a break with tradition in taking the series to a third-person actioner, and we were really looking-forward to seeing it up close. (cont.)
The four and a half minute presentation began with the E3 trailer and was followed up with some random video clips of the game and a question and answer session with the on-hand developers.

The most interesting things we learned during the Q&amp;A was not from what the developer’s would say, but from what they wouldn’t! The way a person phrases a ‘no comment’ statement can say quite a bit. When asked about multiplayer modes, the developers came back by asking us to look at other THQ Warhammer products’ multiplayer features. The dev also let slip that ‘[Space Marine is] not a solo game’.

Another reporter at the presentation asked about character customization. While the developers replied by saying that has not ‘been confirmed’ at this time, we could plainly see in some of the random game clips a screen showing a level 5 sergeant and his stats which looked upgradeable to us. So, we are presuming from this that you will be able to upgrade your character(s).

When I asked about how the single-player missions would be doled out, and if it would be selectable like the Dawn of War II missions are, they responded with another ‘nothing has been confirmed’ statement. There was nothing more to glean from the way they said this but a more dynamic story would not surprise us after how succesfuly it was in DoW2.

Vehicles and Dreadnaughts were brought up in one person’s questioning and the developers slyly responded with a ‘no comment’ and one actually verbalized ‘wink wink’. While a Space Marine actually has to die to become a Dreadnaught, thus not making it likely to be a ‘dread’ in the title, it would seem that they (or perhaps just APCs) will be in the game to some degree – perhaps simply one a supporting fire mission.

One of the issues many gamers seem to have with the E3 trailer for Space Marine is the focus on the space marine chapter known as the ‘Ultramarines’. While most of the ad material for the game also supports their being the central focus on the game, the developers stated that there has never been any confirmation on that fact and that since Space Marine is the beginning of a ‘new franchise’ we should not presume this to be true. Perhaps they are creating a new chapter for this title?

After the presentation was over, I ran into a will-remain-nameless person on the team I know. I inquired as to what game engine the game uses as many believe it to be the same as DoW2. He replied by saying it is actually not the same engine but looks similar as many of the same artists are worked on both titles.

No one would confirm a release date but the game will be coming out on the Xbox 360 and Playstation 3 (hopefully a PC version will be announced at some point). Stay-tuned as new details are released about this game which looks quite intense with some seriously-fun action. 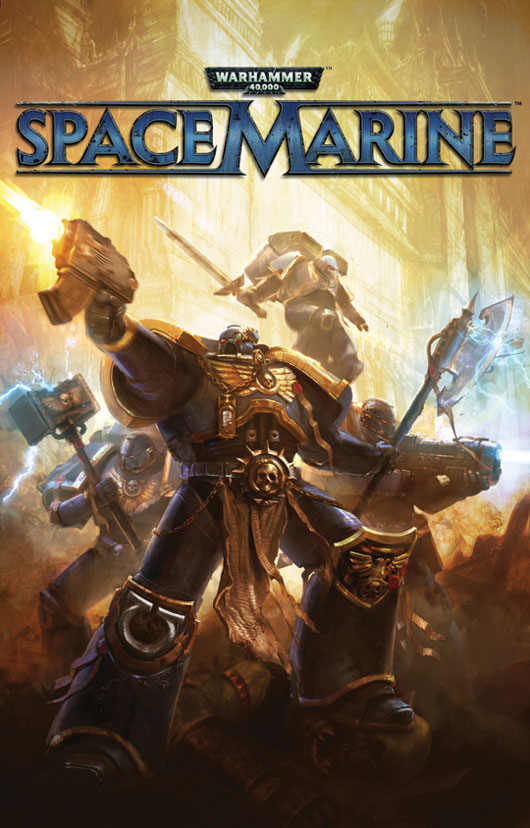